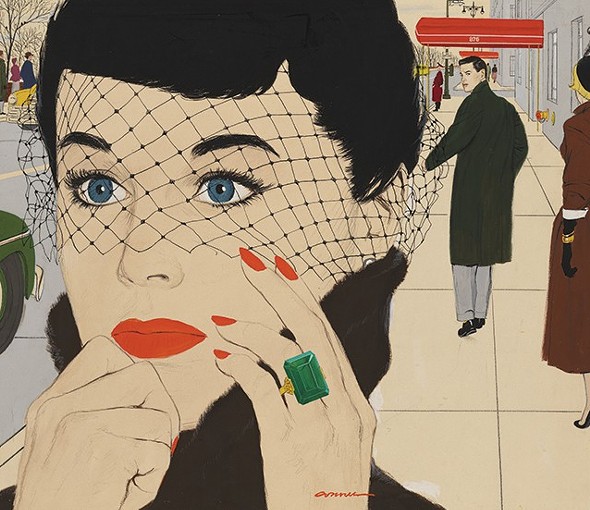 As a child in his father's grocery store in New Jersey, McCauley ("Mac") Conner eagerly awaited the arrival each week of The Saturday Evening Post with Norman Rockwell's images. "You just sit on your thumbs and wait," reflects Conner, whose raspy voice resonates through the phone as we FaceTime. At a young age, he was also inspired by influential mid-20th century illustrator Al Parker. Conner spent a lot of time at the store, drawing people's faces and interacting with customers. "I grew up in a grocery store. Every evening, the wives came, and we just sat around and talked."

When he was a young man, he moved to New York City to work on wartime Navy publications. At the end of World War II, Conner went to Lawrence Studios where he met salesman Bill Neeley and artist Wilson Scruggs. The three decided to open their own studio, Neeley Associates. He soon became a prolific commercial illustrator, his work appearing in various magazines, including Woman's Day, Redbook, and Good Housekeeping.

Typically portraying housewives in relation to men, his work represents the 1940s and '50s era in America leading into the 1960s. "Conner was working at a time when magazines had influence over the American psyche and really had a lot to do with reinforcing gender roles," says Stephanie Plunkett, the chief curator at the Norman Rockwell Museum in Massachusetts. His images depict women in various scenes—with their husbands and children, in their romantic longing for and swooning over men, and in their elegant, seductive innocence. Conner's exhibit, "Mac Conner: A New York Life," which originated at the Museum of the City of New York, is on display at the Norman Rockwell Museum in Stockbridge, MA, through June 5.

Lately, Conner has been mostly out of the business. He is now 102 years old. Napping, going to the park, and talking to his cat Willy—who briefly made an appearance on our video call—are some of his hobbies. His most recent project—illustrating a children's book—had to be stopped short. "My eyesight let me down halfway through the book," he says. Conner is meeting with another illustrator who he hopes can carry out the rest of his vision.

Plunkett describes Conner's defining characteristics as "his great design sensibility, his striking perspectives, and his dramatic cropping." His use of shapes, angles, lines, and depth creates a contrast of space that is somewhat geometric. She comments, "Mac Conner has a keen eye for composition and uses strong areas of color and contrast to create images that have a lot of visual punch."

His exhibit "Mac Conner: A New York Life" is on display at the Normal Rockwell Museum in Stockbridge, MA, through Sunday, June 5. The exhibit features Conner's original hand-painted illustrations for advertising campaigns, magazines, and book jackets, including the cover image, which originally appeared in the August 1950 issue of Woman's Home Companion. (413) 298-4100; Nrm.org.