On the Cover | May 2020 | Little COVID Prince by Chris Buzelli 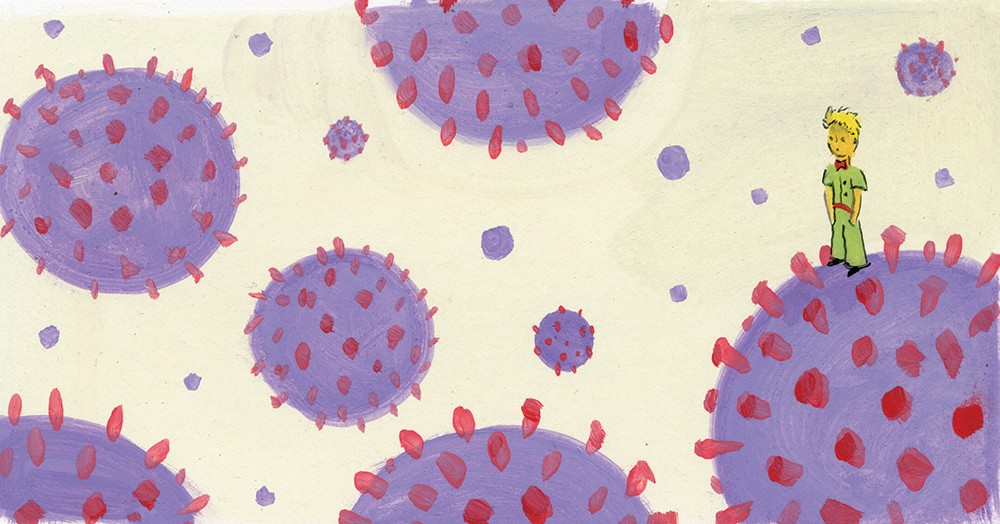 Illustrator Chris Buzelli usually starts his day with a few warm-up paintings to get his creative juices flowing before tackling projects for leading publications like the New York Times or Rolling Stone. His surreal oil paintings typically feature gigantic creatures juxtaposed with miniscule figures, often in a world that is evocative of either a children's fantasy land or a jarring fever dream snapshot. From a Godzilla-sized kitten fighting off an octopus to fantastical portraits of celebrities and politicians, Buzelli's imagination is a teeming menagerie.

Recently, while sitting down to do some routine warm-up paintings, Buzelli had one thing on his mind—the coronavirus. Typically, his commissioned work for newspapers and magazines reflects topical subjects in the social or political realm, but it is unusual for Buzelli to channel his own feelings into his work. As he blew through one sketch after another, his paintings began to reflect a stream of consciousness that revealed the effect that the current situation was having on him. "I think I did about maybe eight or nine little tiny paintings of things off the top of my head," he says. "And then The Little Prince just popped up." To Buzelli, the classic story of loneliness, friendship, love, and loss was a perfect analogy for our collective experience during this global health crisis. "The Little Prince on a coronavirus planet, in a universe of Coronavirus planets, just standing there all alone. This is exactly how everyone's feeling right now," he says.

Buzelli and his wife were living in the East Village when the virus gripped New York City. "In the beginning of it, not too many people were taking it seriously, and it was driving me nuts," Buzelli says. Even now, as the city experiences the full force of COVID-19, it's hard to feel safe in such a densely populated area. Luckily, the couple had a safe haven in the Hudson Valley that they could escape to. Although their Saugerties home was not equipped for full-time living or a studio for Buzelli to work in, they were glad to get out of Manhattan. "We're lucky to have this because it was just impossible to stay safe in New York City. It was like being trapped on one giant cruise ship," Buzelli says.

The coronavirus sketches from that morning have been commissioned by a few other magazines besides Chronogram, as the virus remains at the forefront of everyone's mind. "You can't avoid it," said Buzelli. "It seems odd to comment on something visually without this being a part of it anymore."