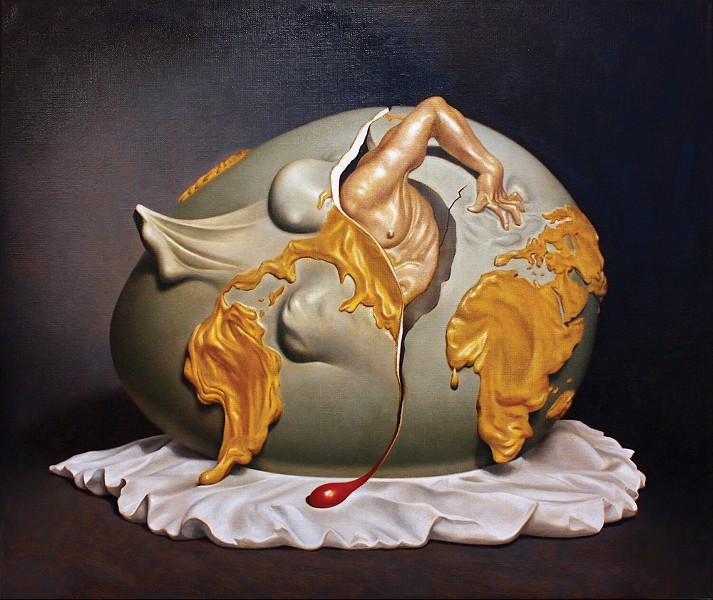 Geopoliticus Child Watching the Birth of the New Man was painted by the Spanish surrealist master Salvador Dali not long after he'd emigrated to the United States. Its theme of the "new man" emerging from the North American continent can be said to represent Dali's creative and personal rebirth in the US after escaping fascist-occupied France, and spoke to America's status as the planet's "new" nation and growing world power. Birth of the New Man, Kingston artist Kevin Frank's ode to the Dali work, adds new layers of meaning. "[Dali's original] really hit a note with me," Frank says. "It was done during the depths of World War II, when the world was in a really dark place. I feel like that makes it relate to now."

Birth of the New Man is part of Frank's Figurine Series, a collection of realist paintings depicting porcelain figurines he's collected, several of which are themselves miniature, 3-D representations of likewise iconic works; others include masterpieces by Rene Magritte and Norman Rockwell. Many of the pictures in the series are perhaps merely whimsical or nostalgic to many viewers at first glance—specifically, the ones that reference Rockwell's Saturday Evening Post covers of idyllic midcentury Americana or depict recognizable Hummel statuettes. But on deeper reflection, they suggest a level of profound, perhaps previously unconsidered significance.

"I paint representational work," says Frank about the Figurine Series. "At the same time, I am committed to concept, which is in part defined by the technical precision that I work toward achieving. In my most current series, I am repurposing found objects that have human form as models for still life. These readymade models are at once personal, culturally specific, and contemporary. As three-dimensional objects, they are familiar knickknacks, but as two-dimensional images recreated in Neo-Baroque style, they allow the viewer to connect and to project meaning and identity. I am interested in exploring this connection as well as the perception of time, place, memory, and culture that the contrast between treatment and subject evokes."

Frank was born in Fort Lauderdale, Florida, in 1961 and received his BFA in drawing and painting from Carnegie Mellon University. He has exhibited his pieces locally in the Hudson Valley and in group and solo shows in New York, Boston, San Francisco, and galleries elsewhere on the east and west coasts. His work has been seen and written about in the Washington Post, Fine Art Connoisseur, ProWax Journal, The Complete Painter's Handbook, and numerous other publications.

"Painting your view of something done by another artist forces you to try to work in the shoes of someone else, to think about what they wanted to say [with the work]," Frank says. "Doing this one was definitely cathartic, and I felt like I could feel the frustration with the world that Dali was communicating. But it was liberating, too. It's sort of a grotesque image, but, ultimately, it's a hopeful one."