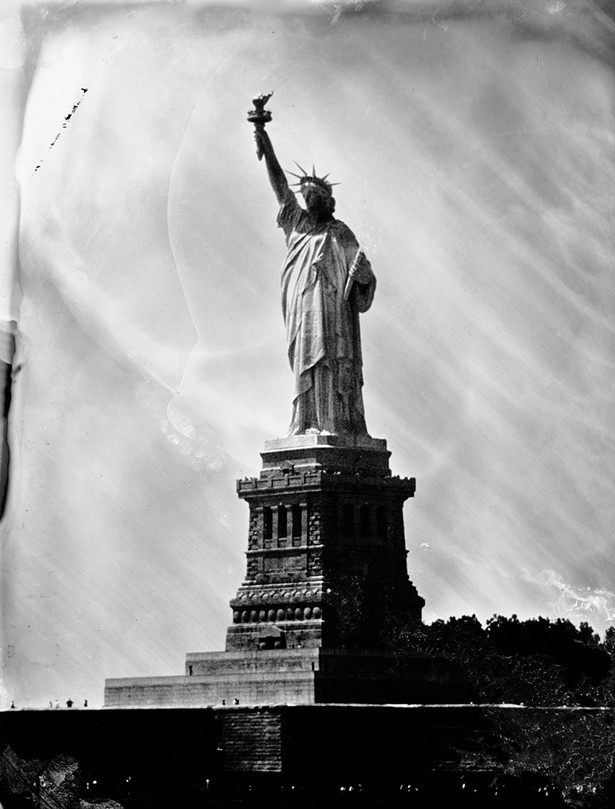 Like most Americans, I've seen hundreds of pictures of the Statue of Liberty—she's become a visual cliché, like a Coca-Cola bottle. Jill Enfield's portrait of the lady reinterprets the iconic sculpture. For one thing, one doesn't usually see the Statue of Liberty Enlightening the World (her actual title) in black and white. Secondly, the angle is slightly different from the typical postcard view, the upraised arm throwing deep shadow over her face. Thirdly, the imperfections of the wet plate collodion process—a 19th-century photographic technique revived by Enfield—adds a tiny visual confusion. On top of this, a supernal, benedictory light flows from above.

Based on Libertas, a Roman goddess, Lady Liberty represents the feminine side of America, the opposite of the sneering bald eagle. Because she's green, she has no identifiable ethnicity. A beacon to generations of new arrivals, the Statue of Liberty herself is an immigrant, designed by French sculptor Frédéric Auguste Bartholdi and arriving by ship in 1886. Her metal framework was designed by Gustave Eiffel, and if you've ever climbed the stairs inside, you've noticed the similarity to the Eiffel Tower.

This photograph is taken from "New Americans," an exhibition by Enfield, a resident of Beacon, at the Garrison Art Center. The show, which consists of portraits of recent immigrants and views of Ellis Island, runs December 5 through January 3. The images are printed on 45 glass windows, which have been assembled into a freestanding "house" by Hudson Valley artisan Greg Barnard. (The windows were scavenged from 19th-century Newburgh mansions.)

Enfield came up with the New Americans concept after 9/11, but didn't start the project until 2006. "Everyone kept talking about immigrants and how terrible they are: 'How can you have them here? Blah blah blah,'" Enfield exclaims. "Everybody's an immigrant! Who's not an immigrant? Unless you're a Native American, you're an immigrant. It seemed so silly to me. And then I just thought about: 'Those in glass houses shouldn't throw stones.'"

Apparently, Enfield invented the all-window edifice as a photographic display, allowing light to pass naturally through its illustrative walls. In theory, a democracy is like a glass house—transparent, open to public view—but also fragile. Recently, Americans have learned how vulnerable our democratic institutions are, under persistent attack from a lying demagogue. Enfield rediscovered the fragility of glass in 2019, when her photographic structure was part of the yearly Collaborative Concepts sculpture exhibition at Saunders Farm in Garrison, and the resident cows kicked in quite a few windows. The work has been restored for the current show.

A glass house also connects to the wet plate collodion process, in which a glass plate is coated with a syrupy substance called collodion, dunked in silver nitrate, then exposed to light. Subjects must pose for 45 seconds (though the time is less—only five seconds—if they're outdoors). The images are black and white, with a sculptural feel. Enfield found her subjects through friends and acquaintances while living in New York City. Usually, immigrants must learn a new language. Am I imagining that I see behind their eyes the strain of constant translation?

Enfield's father came to the US in 1939 at the age of 17. He and his family—who were Jewish—left Nazi Germany just before escape was impossible. Enfield's grandfather and great-uncle were in Buchenwald, the concentration camp, but were released thanks to connections with the family who owned the Leica camera corporation. For Enfield, the immigration issue is not an abstraction. It is the reason she's alive.