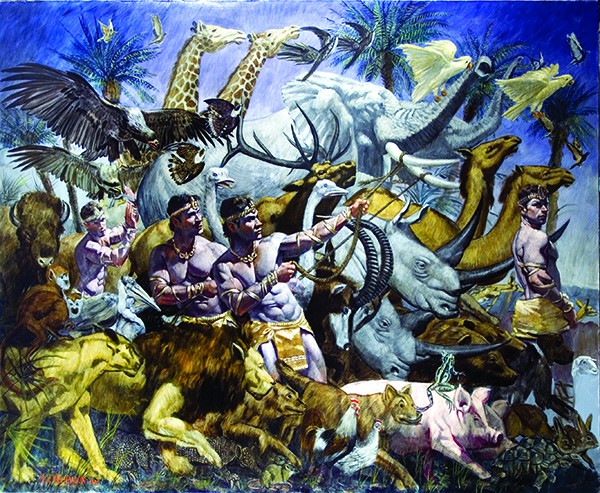 To sift through Mark Beard's career is overwhelming in the most enriching of ways. Descended from a long line of familial artistry, Beard has been painting for as long as he can remember. His father, Russell Beard, "never went anywhere without crayons, paper, pencils, a camera, and a pen," Beard explains. His great-grandfather, George Beard, photographed and painted scenes from America's West, capturing some of the country's most pristine wilderness. This genetic influence permeated Beard's life. "Art was the thing that we covered the broken window with," he says. "Art was the thing we had an awful lot of."

A film by Stephen Blauweiss. Produced by Artist Film Docs.

Throughout his career, Beard has worked in set design, sculpture, photography, painting, writing, and drawing. A multidimensional artist in every sense of the term, he prefers not to align himself with one medium, one style, or even one artistic persona: "Art is about freedom," Beard says. "Working this way gives me the freedom to do what I want." Beard's method also adds increasingly rich layers of context to his body of work that envelope history, politics, styles, mediums, and even character development. That is, to understand Beard's body of work, you must understand Bruce Sargeant and His Circle. Mark Beard does not work alone.

Well, literally, he does. But, figuratively, Beard's work is anything but autonomous. Beard's primary persona under which he creates is Bruce Sargent, a meditation on the American portrait painter John Singer Sergeant. Sergeant is credited with many works depicting exquisite representations of the male form in various states of dress and undress. After Sargent, Beard created Sargent's teacher and French Beaux-Art painter, Hippolyte-Alexandre Michallon, the persona credited with the piece on this month's cover, L'Arche de Noe. The list of personas continues, encompassing fictional contemporaries and rivals, as well as more current personas influenced by ones from the past. Beard is continuously shaping and creating these personas, each one affiliated with a specific era and style. These outlets, Beard explains, are a necessity: "They are intimately influenced by my creativity and productivity, as my creativity and productivity are simultaneously influenced by them." A detailed explanation and outline of these personas is offered in Bruce Sargent and His Circle: Figure and Form (Chronicle Books, 2010), Beard's lively collection of stories, ephemera, and fictionalized documentation describing the work of Sergeant's cohort.

Beard's work necessitates vast expertise and attention to detail as he often comingles work from different personas in one exhibition, imagining a reason for them all to have contributed to the same show. This creates a situation where, as Beard explains, his work reads "more like a novel." He must tend to historical, literary, and artistic continuity throughout his work while developing the character of the particular artist he is representing. To us, this method might seem exhausting. To Beard, it sounds like freedom, which sounds like art.

A show of paintings by Mark Beard, "Landscapes & Bodyscapes" will be exhibited at Carrie Haddad Gallery in Hudson, November 6 through December 14. An opening reception will be held on Saturday, November 8, 6 to 8 pm. Carriehaddadgallery.com.