On the Cover: Christine Ashburn 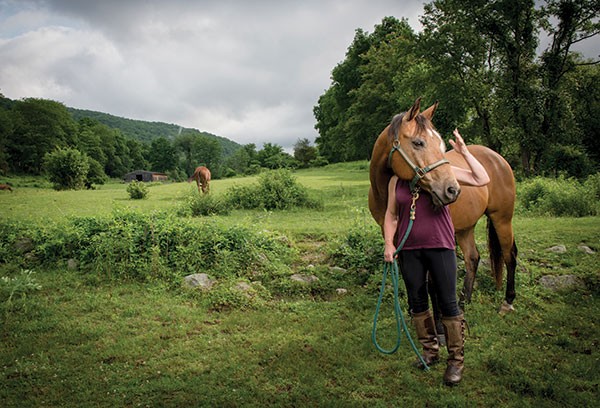 To celebrate its 25th anniversary, the Hudson Highlands Land Trust (HHLT) assigned Christine Ashburn to photograph the Hudson Valley for a little over a year. Seventy-two of her photos showing the love between locals and their land are included in Connecting: Celebrating the People and Places of the Hudson Highlands.

Lilly and Her Horse, Monte was an outtake of the HHLT project. When Ashburn set up to photograph Lilly Gair and her horse, Monte Buck, at Gair Stables in Putnam Valley, she was wary of startling the horses with her massive light and the camera's flash. Instead, the horses were fascinated.

The timing was a coincidence. "I did more formal portraitures of Lilly and Roger, her husband, and I was snapping away, and the horse kind of over took her," Ashburn says. "But it's indicative of who Lilly is—she's kind of one with her horses."

Ashburn took some classes at the International Center for Photography in Manhattan five years ago and a few at the Garrison Art Center. Her work with Hudson Valley locals caught HHLT's eye and they commissioned her for the project, an experience for which she's "still completely humbled and honored."

"They had me in an airplane at one point, had me in canoes. I did lots of hiking. We photographed a hiker on the Appalachian trail that was passing through," she says. The hiker drank all their beer, smoked all of their cigarettes, and ate all of their cookies over the two hours they spent together, but that seemed a fair price to Ashburn.

Ashburn's education explains her fascination with humans and their natural environments; At NYU, the photographer studied anthropology. She moved to the Hudson Valley in the late `90s and didn't pick up photography until nine years ago. "Being a portrait photographer is a lot like being an anthropologist," Ashburn says. She likes to step into her subjects' worlds and document them, a fascination sparked by her upbringing. She grew up on Arthur Avenue in "da Bronx," as her website fondly refers to it. Her great-grandfather, Ettore Manfredi, was a portrait photographer in Manhattan in the `40s.

Ashburn lived a nomadic childhood while her mother and stepfather, a waitress and plumber, sought out work, going so far north as Alaska. "I've always enjoyed the feeling of being a stranger in a strange land and observing, whether it be the bush of Alaska or the Bronx."

Ashburn's photos thrive on the landscape and locals of the Hudson Valley. She never works in studios because she likes to capture real people, real moments. "I like photographing people," she explains. "And the occasional horse."

For more of Ashburn's work, visit Christineashburnphoto.com. For more information on the 25th-anniversary book, visit Hhlt.org.