On the Cover: Catherine Winkler Rayroud

November 23, 2010
Last Updated: 08/13/2013 4:14 pm
comment
While sitting in a restaurant in Bellville, Texas, Catherine Winkler Rayroud overheard a man claiming global warming was a government-perpetrated fraud. Rayroud, who grew up in environmentally conscious Switzerland, was appalled by the man’s statement. “I wanted to ship [him] up to the North Pole for six months,” she says. It inspired her to create the papercutting Global Warning! Stop Messing with Us! She chose to depict penguins in particular because of the adverse effect melting polar ice is having on their species.

Moving to a town outside Houston was quite a culture shock for Rayroud. She had never thrown out a bottle or newspaper her entire life. “Then I moved to Texas and it was wild,” she says. “Recycling was a word that not many people used, and whenever I asked where I could recycle all the stuff that was piling up in my garage, [people] would laugh at me.”

Time is another concern of Rayroud’s, and another form of cultural dislocation. When she moved to America, the artist was surprised at how busy everyone appeared and found it difficult to keep up with the fast-moving pace.

In the papercutting I Have No Time: 21st-Century Motto, a watch is the central image; within the watch are figures on the run. Sitting on the stem is a woman cutting paper. Rayroud put herself outside the watch because she is often asked how she has so much time to spend on papercutting. Symmetrical pieces such as Global  Warning! Stop Messing with Us! take Rayroud four to five weeks to complete, but more intricately detailed papercuttings with ornate patterns can take up to six months or longer. “Whether I do it or not, time will go by anyway,” she says. “With everything going so fast right now, I quite enjoy this slow process.”

The Swiss tradition of Scherenschnitte, meaning “scissor cutting,” started in the 1800s in Château-d’Oex, the village where Rayroud was raised. She made her first papercutting in 1981 and has not stopped since. Rayroud begins by folding the thin sheet of stiff black paper. She meticulously draws the images and decorative borders. Rather than use traditional straight scissors, the ones she uses are sharp, pointy, narrow, and curved. A scalpel is also used to cut out holes and form empty spaces.

Rayroud won first prize for Global  Warning! Stop Messing with Us! at the Natural Habitat juried exhibition in Houston in 2009. Her work is currently on view through December 18 at the Ann Street Gallery in Newburgh in the “Cut It Up! Contemporary Papercutters Exhibition.” www.annstreetgallery.org. Portfolio: www.catherinewinkler.com. 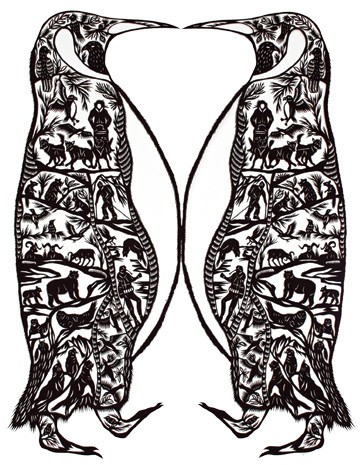