On the Cover: Ang Tsherin Sherpa 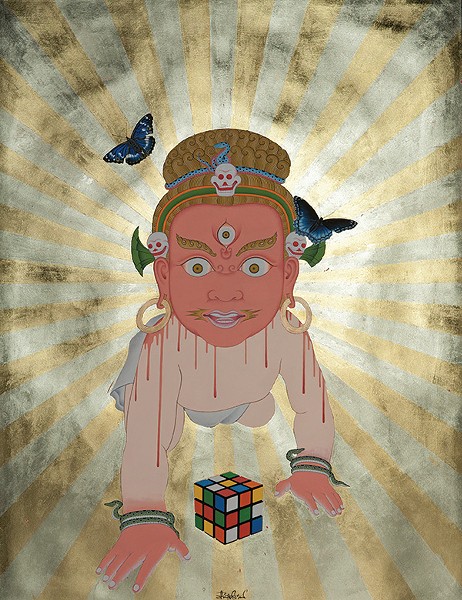 Instruction under Buddhist masters, a traditional Tibetan painting apprenticeship, and immersion into contrasting cultures are only a few of the factors contributing to Ang Tsherin Sherpa's artistic pedigree. Born in Nepal in 1967, the artist studied Buddhist philosophy and served a painting apprenticeship under his father. Tsherin Sherpa's roots are tied to traditional thangka painting, where specific colors are used to represent the Buddha in highly symbolic gestures and poses. While the image of Buddha remains in Tsherin Sherpa's artwork, his interpretations are anything but traditional. In Baby Spirit #1, we see an iconic spiritual image turned contemporary—the East meets the West, cultures clash, and we're left questioning what is meant to be sacred.

"My work deals simultaneously with the preservation and transformation of scattered Tibetan and Himalayan culture," Tsherin Sherpa has said. He went on to reveal his curiosity in wondering how Tibetan traditions will be maintained after continuously merging with other cultures. Tsherin Sherpa currently resides in Oakland, California, where he has faced his own Western modernization. He has worked as a graphic designer after his emigration, creating posters for chains like Jamba Juice. His conventional Asian painting techniques have merged with contemporary American advertising tactics.

Fabio Rossi, of Rossi & Rossi Gallery, who represents Tsherin Sherpa, was attracted to the artist's combination of formal technique and contemporary Tibetan political issues. Rossi explains, "Tsherin seems to be able to create a visual vocabulary that shows continuity with the rich tradition of the past, but that at the same time can speak to the younger generation and its need to keep a strong identity in the face of constant pressure from the Chinese occupation and Western modernity."

An "Art: 21" interview discloses the painter's identification of a "gap" between mundane life and spiritual practice. "We divide our time for these practices to the extent where they almost appear to be two different phenomenon," he states, which seems to be presented visually in placing a Rubik's Cube beneath a crawling baby Buddha. In mixing the holy and the ordinary, custom and commercial, and his own perceptions of what is foreign, Ang Tsherin Sherpa's creations present a "lost in translation" disorientation where his contemporary concerns are voiced with a billboard's urgency and a master's skill.

Works by Ang Tsherin Sherpa are currently presented as part of the "Freedom: Just Another Word For..." exhibit at MASS MoCA, along with pieces by Xu Bing, Gonkar Gyatso, Ran Hwang, Long-Bin Chen, and Roger Shimomura. The exhibit displays through May 26. (413) 662-2111; Massmoca.org.