On the Cover: A Formal Display of the Obvious | Visual Art | Hudson Valley | Chronogram Magazine

On the Cover: A Formal Display of the Obvious


We’re all familiar with infographics, though we may not know them by that name. Subway maps, newspaper weather graphs, street signs—all infographics. They’re a clever way of displaying complex information in a visual, rather than a text-based way. They’re used extensively by computer scientists and mathematicians to convey conceptual information. (A revered example of the genre: Charles Joseph Minard’s flow map of Napoleon’s disastrous campaign of 1812, displaying several data sets—troops size, direction, weather—simultaneously in two dimensions.)

Graphic designer and illustrator Jason Cring wanted to create something slightly different from a traditional infographic for our January cover, using calendrical elements as points of departure. “Infographics have an expected tone,” says Cring. The voice is scientific and sometimes dry. I wanted to come at it from more of an irreverent angle.” That being said, Cring believes infographic purists like information design guru Edward Tufte (whose sculpture appeared on the cover of the July issue), would be appalled. “Tufte’s very opinionated about the right and wrong ways to present information,” says Cring. “He would not approve of any of this, I’m quite sure.”

It should also be noted that the words that appear over the masthead—Make Me Xenophilous—are a chronogram (small “c”). A chronogram is a phrase in which specific letters, interpreted as Roman numerals, spell out a date. If the MMX in Make Me Xenophilous are added together as Roman numerals (M=1,000; X=10), they equal 2010. The cover chronogram was written by Sparrow. (Xenophilous means to be attracted to foreign peoples, manners, or cultures; we are interpreting it as an aspiration toward tolerance.) Sparrow also penned some alternates: 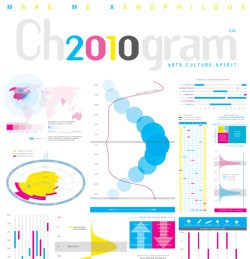