Manhattan gallery owner Edwynn Houk was representing daguerreotypist Jerry Spagnoli when he recommended him to heirloom gardener Amy Goldman for a project in 2000. Goldman, one of the world’s foremost experts on heirloom vegetable gardening, was slightly skeptical but brought samples of a previous year’s harvest to Spagnoli’s Manhattan studio.

“We didn’t know where this thing was going,” Goldman says. But each photoshoot showed daguerreotype made an ideal medium to capture the unique beauty of heirloom vegetables—antique varieties originating from open-pollinated seeds—and the “constantly evolving wonderland” of Goldman’s home, the 210-acre Abraham Traver farmstead outside Rhinebeck. The result is Heirloom Harvest: Modern Daguerreotypes of Historic Garden Treasures (Bloomsbury, 2015), a perfect collaboration between two people passionately devoted to preserving historical techniques.

Goldman’s devotion to heirloom gardening began after moving into the Traver property in 1988 with ex-husband Larry Arno. Tucked away off a one-lane road, the property was hilly and 75 percent forest; the original farmland worked by Traver in the late 18th century had long been abandoned, as had a four-acre pond, which reverted to marsh. But Goldman fell for the white farmhouse with blue shutters, and the bluestem and maple trees growing around the structure. “It was really like stepping back to the 18th century,” says Goldman, who was then harvesting non-heirloom fruit and vegetable plants, and practicing clinical psychology full-time. She remembers noticing an abundance of flora sprouting from all corners. “I felt a sense of complete calm and tranquility.” Then she laughs: “And I was sold before I set foot in the house.”

Once moved onto the Traver property she had little room for gardening, thanks to the lack of open space. But over the first two years she and Arno renovated the house and property by ripping up floorboards, replacing the roof, planting maple trees and shrubs, dredging the pond, and even planting a small apple orchard. And fortunately, she found a sun-soaked vegetable garden spot outside the kitchen.

The crops grown there were impressive enough to compete at the Dutchess County Fair, and in 1990 she won first prize for her American Flag leeks and Red Giant onions.

“It had always been fruits and vegetables for me,” she says, “but it wasn’t until 1990 when I read two books about heirlooms and the looming threat of genetic erosion in our agriculture that I really became aware of what heirloom was.” Those books—Cooking from the Garden by Rosalind Creasy, and Shattering: Food, Politics, and the Loss of Genetic Diversity by Dr. Cary Fowler, whom she married in 2012—showed her “these gorgeous things out there are endangered.” She felt drawn to their odd shapes and interesting histories, which can date back centuries.

People may know the popular varieties by their curious names, like “Radiator Charlie’s Mortgage Lifter Tomato,” which helped a mechanic pay bills during the Great Depression, or the famous “Moon and Stars Watermelon,” a light summer sweetness from Missouri whose very appearance—and name—begs van Gogh comparisons.

One of Goldman’s favorite heirloom histories is that of the San Marzano tomato, which you can find peeled or crushed in a can at the supermarket, thanks in part to her cousin Tillie (born Myrtle Ehrlich). “She is responsible for introducing the San Marzano tomato to America,” says Goldman of her Brooklyn-bred Jewish cousin, both maternal and paternal. Tillie, who had grocery distribution experience, met tomato farmer Florindo del Gazio on vacation in Italy. The two struck a partnership to bring the San Marzano to American markets, though there’s a second partnership that was rumored within the family—one of romance between the Jewish grocer and Italian farmer. Whatever is true, because of the intense family connection, Goldman calls the San Marzano her “love apple.”

She would grow other varieties of tomato, plus vegetables like purple bell pepper and white eggplant, at the Traver farmstead, finding more harvest time after ending her psychology practice in 1991 to raise her daughter, Sara. She won dozens of ribbons, including top showings at the New York State Fair and the Philadelphia Harvest Show. By the early 2000s she was Martha Stewart’s go-to heirloom expert. She would chair the Seed Savers Exchange—a global network of 13,000 heirloom gardeners—of which she is now a special advisor. And she wrote three books, informational dives into the worlds of heirloom tomatoes, squash, and melons.

Heirloom Harvest, however, is a departure for Goldman, and that’s thanks to Spagnoli, a modern master of the daguerreotype process, which was popular during the mid-19th century. The process—applying chemicals to copper polished on a mirror and exposed to light—offered entirely different interpretations of Goldman’s oddly shaped vegetables. Alabama Coschatta corn became weary specks hanging onto fading life. Female squash blossom became a delicate, wistful dancer.

For the first six years of the project Goldman would bring vegetables to Spagnoli’s studio, but this posed problems. “I was working in the studio with the vegetables, and with the daguerreotype the exposures were long,” he says. “They were delicate plants and during the length of the exposure they would wilt.” So he decided he had to shoot at the farmstead, which meant updating the daguerreotype process. He began shooting with 8-by-10 film, transferring the images to daguerreotype plates. Later, after the factory that produced the 8-by-10 film burned down, Spagnoli switched to digital film.

“I realized the charm of the daguerreotype as an object isn’t compromised if the original is from another source,” he says. “So I thought of daguerreotype as being a presentation medium. I sort of freed myself.” 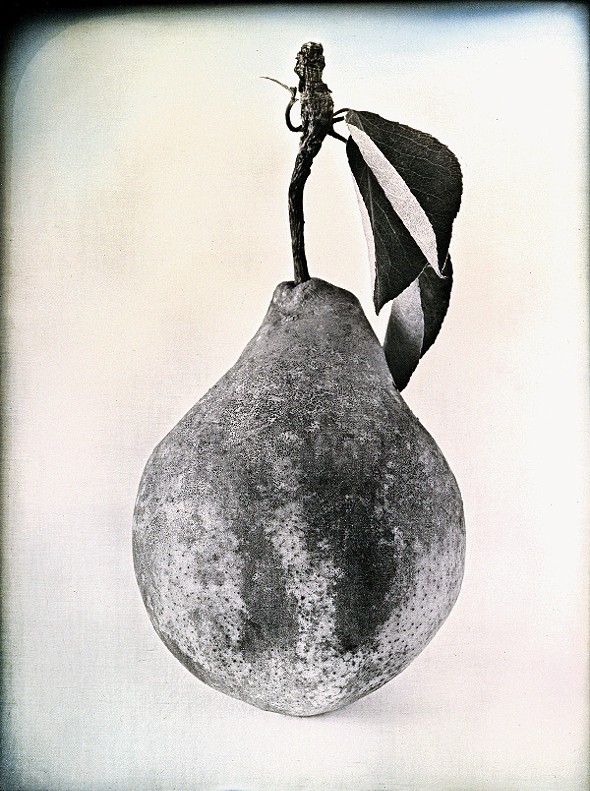 The freedom allowed Spagnoli to shoot not just the vegetables but the environment around them, chronicling daily life at the Traver farmstead. He captured the new greenhouses, complemented by a koi pond, cottage, and rose garden, plus buzzing bees, grazing cattle and scurrying chickens—who didn’t want to pose for Spagnoli. Goldman, meanwhile, realized they had collected a “comprehensive sampling of vegetables and fruits,” which inspired her to write the history of the farmstead that gave so much back to her.

“It took me a year to write that essay, and it was really difficult because it was a personal essay,” says Goldman. “I haven’t done anything like that before—talking about the intersection of my life with the land and the fruits of the earth.”

The essay, “Fruits of the Earth,” was included with the daguerreotypes of vegetables and the Traver farmstead in Heirloom Harvest. The book reads as a historical document of a farmstead, its gardening owner and the vegetables she grows within. For Goldman, the daguerreotypes—which she calls “the most heirloom of heirloom photography”—couldn’t have fit better. “There’s no other medium of photography that can match the detail and acuity,” says Goldman, who doesn’t understand all the technical aspects of the medium but attributes Spagnoli’s work to “magic.” “[The images] seem to float in time and space. They have an ethereal quality.”

There’s a daguerreotype early on in Heirloom Harvest called Night in the Garden, which depicts the greenhouses at night. They’re framed by meadow sage, garden phlox, shrubs, a stark white fence, and trees whose bunched leaves shine like constellations against an eternal darkness. Night in the Garden shows the fruits of Goldman’s tireless attempts to preserve the history of the Abraham Traver farmstead while preserving the histories of countless varieties of heirloom plants.

“She’s very, very acutely aware of the history there,” says Spagnoli, who hadn’t ever spent considerable time at a farmstead like Goldman’s. “And yet there’s a very strong aesthetic sensibility about how things should look. (Her work is) historically and culturally important.”