Ntozake Shange's "When the Rainbow is Enuf" at SUNY New Paltz 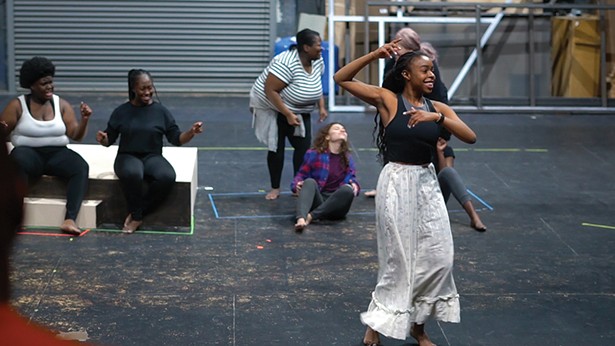 "For Colored Girls Who Have Considered Suicide / When the Rainbow is Enuf" is not a play; it's a theatrical happening. Its technical term: choreopoem, or a form of dramatic expression weaving poetry, dance, music, and song together. The term was coined in 1975 by playwright Ntozake Shange for "For Colored Girls..." The unconventional—and Tony-nominated— production was the second performance by a black woman to ever hit Broadway. And this month, it comes to New Paltz.

Set at the McKenna Theatre on the State University of New York at New Paltz campus, the all-student, all women-of-color cast follow seven ladies who, while suffering from oppression in a racist and sexist society, form a sisterhood through their stories of empowerment, love, and loss. Each woman is nameless, and only identified by a color—lady in green, lady in orange, etc. The absence of names lends a powerful effect, helping audience members from various ethnicities find identification and connection. Using free-form style, the specific stories are transformed into universal ones.

"This is a play about healing," says director Bria Walker. "These women have been silenced too long. Their stories have not been told enough and told by them. They're finally taking over their own narrative."

For one of the first times in history, women are able to openly discuss rape, abortion, domestic violence, abandonment, sexual abuse. Sound familiar? Although written more than 40 years ago, Shange's pieces are timeless—especially now. "Fortunately—and unfortunately—these stories work on a timely level," says Walker, who's also an assistant professor of acting at SUNY New Paltz. "We've got all these cultural movements going on right now—Say Her Name, #MeToo, Black Girls Rock! You can see these throughout the pieces. There are so many parts of the script that hit us right in the gut today."

Yet it's not all completely gut wrenching and emotionally heavy. Of the 20 different choreopoems, there are some that emulate the beautiful snippets of life, too: laughter, celebration, moments of joy. In "now i love somebody more than," the lady in blue discovers her love for blues clubs, and becomes possessed by the music. And, adding dance and song help complement each piece's emotional burden and lightness.

Perhaps the most moving portions of the piece are those that mirror the life of the playwright. After four suicide attempts, Shange—who suffered from depression—was once overcome by the appearance of a double rainbow on a drive in California. In that moment, she realized something. "Women, and especially women of color, deserve to have their stories told and live with dignity and respect. They're worthy of living a happy life," says Walker. "And no matter how you identify in ethnicity or gender, everybody deserves healing."

"For Colored Girls Who Have Considered Suicide / When the Rainbow is Enuf" runs through March 10 with both 8pm and 2pm showings. McKenna Theatre, State University of New York at New Paltz. Tickets: General $18; Senior/Faculty/Staff $16; New Paltz Students $10. newpaltz.edu/theatre.