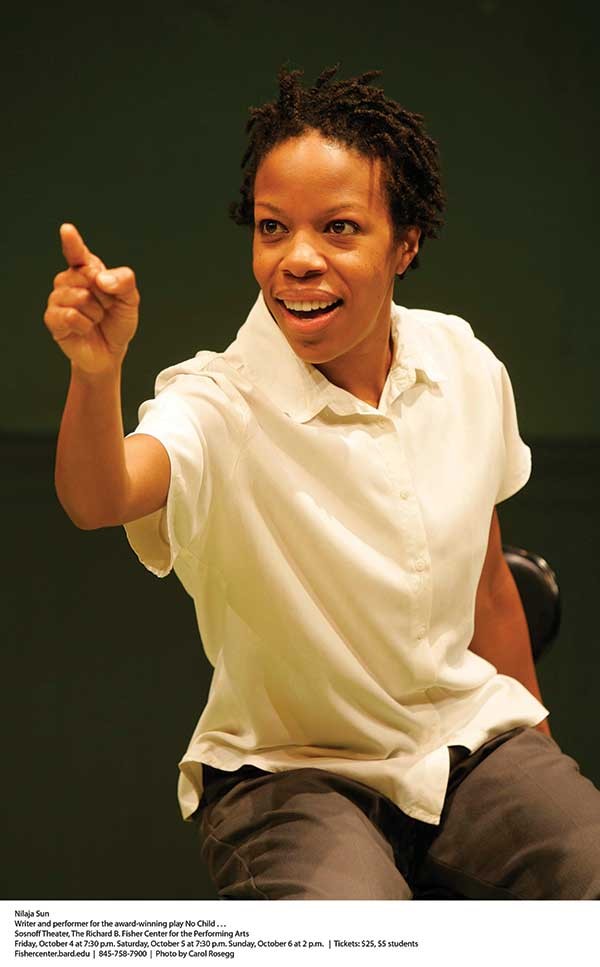 As a theater major at Franklin and Marshall College, a private, predominately white liberal arts school in rural Pennsylvania, Nilaja Sun wrote a play featuring an interracial cast. "All of the characters were black and Latino," Sun says. "I had no one to play any of the characters." So started Sun's career as a solo artist.

In her award-winning one-woman show "No Child"—which will be staged at Bard's Sosnoff Theater October 4 through 6—Sun seamlessly embodies the usual suspects of an inner-city public high school: class rabble-rousers, idealistic teachers, sage janitors. The play is based on Sun's 15 years of experience as a New York City public school teaching artist—a professional artist who teaches temporary, intensive courses in arts-deprived schools. In the play, Sun plays a version of herself—a teaching artist named Ms. Sun—at the fictional Malcolm X High School in South Bronx. Sun's dynamism as a performer is apparent in her ability to portray every character—from fiery teenagers to blue-collar workers—as convincingly as the one that's based on her own life. From replicating physical details, like distinctive facial features, expressive postures, and authentic accents, to capturing individual personalities and attitudes, Sun invokes characters with such heartfelt precision that she seems to momentarily become each person—a shapeshifter of the stage. "I love physical comedy," says Sun. "I can literally embody someone in a second."

Sun's affecting portrayals of the students, teachers, administrators, and personnel at Malcolm X High are complemented by the piece's thematic resonances. In the play "No Child," Ms. Sun is teaching a play, "Our Country's Good," that is about Australian convicts who are staging a play while behind bars. The overlapping structure—a play within a play within a play—is one way that Sun asks us to consider the impact of art on our lives, the relationship between fiction and reality. "'Our Country's Good' is about convicts doing a play," Sun says, adding that while seemingly unrelated, the play's setting strikes a chord with students who spend so much of their school day passing through security checks. "It's almost like we're setting them up to go to prison," says Sun. "In 'No Child,' I can talk to the student characters about what it means to be imprisoned, what it means to feel imprisoned."

While "No Child" touches upon many political themes—it's named after the controversial 2001 No Child Left Behind Act, after all—there is no overt agenda. "It's not didactic," Sun says. "Hopefully, your heart is opening to the challenges that the kids and teachers face." In her attempt to accurately portray the spirit and humor of these students—so often marginalized and misunderstood—Sun simultaneously pays tribute to them. "People call them 'at risk.' 'Beautiful human beings who are young art thespians'—that's what I want to call them." Sun also celebrates the dedicated teachers and administrators in "No Child" by depicting them not as inflexible taskmasters, but as people who believe in the transformative power of the arts—like Principal Kennedy. "She's tough as nails, but she believes in the work that Ms. Sun is trying to accomplish," Sun says.

Nilaja Sun is a Live Arts Bard resident artist, and she will also teach a solo performance class at the school in the spring. During her residency, Sun will be working on a new play, "Pike Street." She says, "It's about a family in the Lower East Side during the storm of the century and what happens when personalities collide." "No Child," directed by Hal Brooks, will be staged at Bard's Sosnoff Theater October 4-6. (845) 758-7900; Fishercenter.bard.edu.