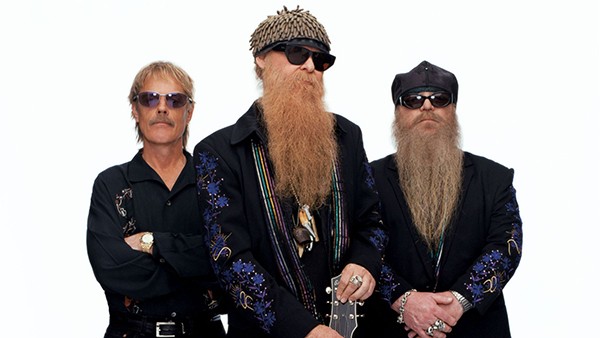 March 13. Well, if it ain't that L'il Ol' Band from Texas. In the boogie business since 1969, ZZ Top is an American institution on par with barbeque, muscle cars, and Daisy Duke cutoffs. The trio of singer-guitarist Billy Gibbons, singer-bassist Dusty Hill, and drummer Frank Beard (memory assist: The latter is the only member who does not sport a beard) is also, hands down, one of the greatest blues-based hard-rock acts of all—despite the fact that, arguably, more people know them for their glossy 1980s sequencer-driven MTV smashes ("Legs," "Gimme All Your Lovin'," "Sharp Dressed Man") than for their gloriously raunchy 1970s chaw-spittin' brawlers ("La Grange," "Just Got Paid," "Cheap Sunglasses"). It's a safe bet that fans of both eras will be sated by this rare intimate-theater appearance at UPAC, as no doubt all the hits will be rolled out in suitably low-ridin' style. (Stop Making Sense screens March 6; Theatre Terra presents Eric Hill's "Spot" March 10.) 8pm. $69-$119. Kingston. (845) 473-2072; Bardavon.org.