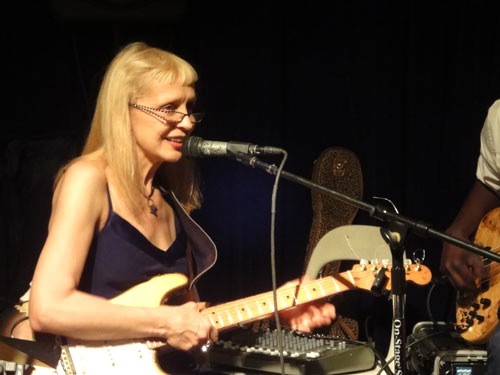 June 20. In 1977, Leni Stern, the wife of fellow guitarist Mike Stern, swapped acting in her native Germany for playing music in the US, and the jazz world has been all the better for it. She made her recording debut in 1985 with Clairvoyant, which features the veteran greats Paul Motian on drums, Larry Willis on piano, and her sometime teacher Bill Frisell on guitar. The disc is well named, given the musical telepathy on display, and also helped establish her as a composer to be reckoned with. Stern, whose voice the Boston Phoenix described as "Marlene Dietrich borrowing Billie Holiday's phrasing," headlines this, another of Quinn's exemplary jazz bookings. Lately, she's been flouting 2012's Smoke, No Fire, her 13th and newest set as a leader, which was recorded in Mali amid that nation's recent civil strife and carries a strong African influence. (The George Coleman Jr. Rivington Project plays June 15; Eric Person Duoscope jams June 22.) 9pm. $10 suggested donation. Beacon. (845) 202-7447; Facebook.com/QuinnsBeacon.