News Headlines You May Have Missed from December 2017 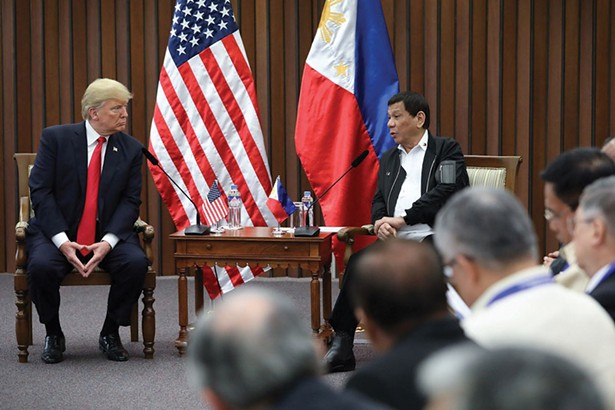 In late November, while on a swing through Asia that included a stop in Manila for the Association of Southeast Asian Nations (ASEAN) summit, President Trump was sung a love song by Filipino President Rodrigo Duterte at a dinner in front of leaders from across Asia. Duterte later explained his crooning was "on the orders of Donald Trump." One of the song's verses, translated from Filipino, begins: "You are the light in my world, a half of this heart of mine." "Ladies and gentlemen, I sang uninvited, upon the orders of the commander-in-chief of the United States," said Duterte, who is known as the "Trump of the East," because of this brash style. The US and its former colony, the Philippines, have been strategic allies since WWII. But their relations have been strained by anti-US outbursts from Duterte and his enthusiasm for better ties with Russia and China.

On November 11, Wisconsin Governor Scott Walker signed a bill into law doing away with the 10-year-old minimum age requirement for hunting. The law allows children younger than 10 to hunt if they are accompanied by an adult mentor who stays within arm's length of them. The Wisconsin Department of Natural Resources released data later in November that showed the agency had sold 1,814 mentored hunting licenses to children age nine or younger in the first week. The vast majority—1,011 licenses—went to nine-year-olds. Fifty-two licenses went to children under age 5, with 10 going to a child under a year old. A four-year-old was the youngest licensee to register a kill. State Rep. Joel Kleefisch, (R-Oconomowoc), said when he took his eight-year-old daughter hunting, he had to do it in Michigan because she wasn't old enough to legally hunt in Wisconsin at that time. Kleefisch, the chairman of the Assembly Committee on Natural Resources and Sporting Heritage, said parents should be able to decide when their children are ready to hunt.

Suicide rates are spiking in American teens, as are rates of anxiety and depression. A recent study in the Journal of the American Medical Association shows the pattern is similar for self-harm, with alarmingly high rates among young girls. Until 2008, the rate of emergency room-worthy self-inflicted injuries among teens was flat. Since 2009, the rate of girls aged 10 to 14 arriving in emergency rooms with self-inflicted injuries has increased by 19 percent per year, a pace that far surpasses any other group.

A recent analysis by David Leonhardt in the New York Times compared the number of lies told by Presidents Obama and Trump. (Lies, as defined by Leonhardt, were "demonstrably and substantively false statements." During Obama's eight-year term, he told 18 lies, such as "If you like your health care plan, you'll be able to keep your health care plan," in reference to the Affordable Care Act. (Under the ACA, however, some people were required to switch plans.) President Trump, during the first 10 months of his presidency, has told 103 lies, more than three times as many as Obama did during his entire presidency. As Leonhardt notes: "When he is caught lying, he will often try and discredit people telling the truth, be they judges, scientists, FBI or CIA officials, journalists, or members of Congress. Trump is trying to make the truth irrelevant. It is extremely damaging to democracy, and it's not an accident. It's core to his political strategy."

In 2015, Australians Nick and Sarah Jensen publicly swore that their religious beliefs would force them to divorce in protest if Australia enacted marriage equality laws that allowed for same-sex marriage. "Marriage is the union of a man and a woman before a community in the sight of God," said Nick Jensen. "My wife and I, as a matter of conscience, refuse to recognize the government's regulation of marriage if its definition includes the solemnization of same-sex couples." On November 15, the results of a two-month postal survey were released, indicating 61% of Australians were in favor of legalizing same-sex marriage. Afterward, the Jensens released a statement suggesting they were backtracking from their original commitment to divorce. "My previous public comments regarding civil divorce never envisaged me separating from my wife, but rather our marriage from the state," Nick Jensen wrote in a text message.

On December 15, two Facebook researchers, David Ginsberg and Moira Burke, posted the following piece on the site's news blog: "Hard Questions: Is Spending Time on Social Media Bad for Us?" The pair reviewed some of the top scientific research on well-being and social media from scientists and mental health clinicians. Their conclusion? People who spend a lot of time passively consuming information on social media—reading but not interacting with people—report feeling worse afterward. That's the downside. But's there's also an upside: People who actively interact with other people—sharing content, sending and receiving messages—report improvements in well-being. Our reading: If Facebook makes you sad, it's because you're using it wrong, and/or not enough. C'mon get happy and post on some Timelines!

Forty-four percent of Americans believe that media outlets fabricate stories about President Trump "more than once in a while," according to a Poynter Media Trust Survey released in late November. The breakdown looks like this: 24 percent believe that the media fabricates Trump stories "about half of the time," 14 percent "most of the time," and 6 percent "all of the time." This is a wildfire stoked by the president: In his 318 days in office, Trump has tweeted about "fake news" 155 times.

Amazon was the eighth-largest employer in the US at the end of 2016, and the headcount is growing by 40 percent year-over-year. (The online retailer also announced plans to build a second US headquarters that will employ 50,000.) According to an analysis by Quartz.com, Amazon will represent 20 percent of the entire US retail industry's growth in 2017—even though it only represents three percent of overall US retail sales. Some things to keep in mind about Amazon's market dominance: Assuming the current industry trends continue through the end of the year, the number of employees in Amazon-related retail (that is, retail that Amazon competes with, such as book stores, as opposed to areas it doesn't compete with, like gas stations) will decline by about one percent year-over-year. Amazon's employment increases won't be enough to cover the losses in the rest of the industry. Amazon has already added 55,000 robots this year and its growth rate is accelerating, meaning more jobs—for robots.