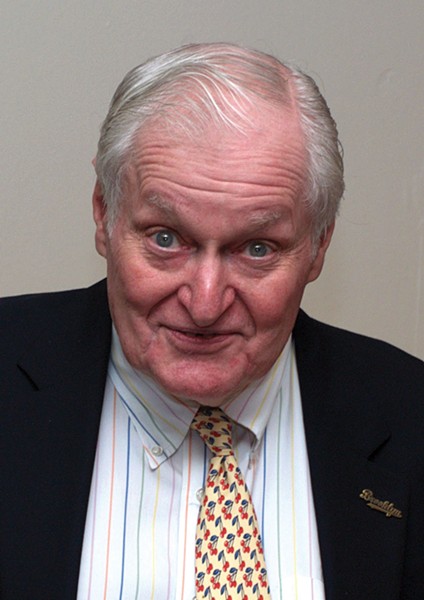 John Ashbery died in his home in Hudson in early September. The 90-year-old poet from Rochester had won many awards during his life, including the Pulitzer Prize, the National Book Award, the Yale Younger Poets Prize, and a MacArthur Fellows “Genius” Grant. In a 2015 interview with the New York Times, Ashbery, who also taught at Bard College for many years, reflected upon the state of being inspired: “Once something has inspired you, that’s it. Somebody—maybe me—once described the situation as like standing on the deck of a ship that’s pulling away from shore, smiling and waving at friends who are waving back at you. They still love you and vice versa, but they can’t come along.”

When Hurricane Harvey hit Texas at the end of August, alligators ended up in yards, bats were pried from bridges, and fire ants formed giant amorphous blobs as a survival mechanism. Due to flooding, the fire ants evacuated their underground tunnels and formed a mass rafts that floated along the streets of a neighborhood near Houston. Fire ants, which are native to South America but also exist in the southwestern part of the United States, have adapted to living in the flood plains of Brazil’s tropical wetlands. “Fire ants are one of the few insects capable of building big structures with their body,” said one researcher at Georgia Tech University. Alberto Fernando-Nieves, an associate professor at the School of Physics at Georgia Tech, also commented about the viscosity of the ant colony formation: “It’s not unlike ketchup.” If provoked, the ants bite and sting. The ant bites, which can be deadly if the victim is allergic, are relieved through epinephrine injections and antihistamines.

In an era of mass distraction, attention deficit disorders, and lack of focus, Fox Networks Group has catered to our shortened attention span: Six-second advertisements are the new addition to NFL Games on Fox TV. “It’s a long enough amount of time to actually tell a story, whether it’s to convey an emotion or deliver a product message or a piece of news, and yet short enough that the consumer is not irritated by being forced to watch an ad,” said Tara Walpert Levy, Vice President of Agency and Media Solutions at YouTube and Google. According to Eric Shanks, president of Fox Sports, the six-second ads, if strategically placed, have the potential to gain more attention than the standard 15- and 30-second ads.

Female inmates will soon be able to obtain tampons and other feminine hygiene products for free. At the end of August, the Federal Bureau of Prisons issued a statement requiring a wide variety of feminine hygiene products (tampons, liners, and pads) to be made available to female prisoners at no charge. The items, which are categorized by US tax laws as “luxury items,” are now recognized by the bureau as a basic human necessity. Prior to this adjustment, the Bureau had no law that obligated them to give hygiene products to women: Female prisoners would have to use the little money they made from their low-paying prison jobs to be able to afford the products.

Nearly 500,000 people have been affected by a pacemaker recall. In late August, the FDA recalled several varieties of wireless pacemakers made by Abbott, a global health company. Abbott released a statement, calling for patients to visit their doctors to upgrade their devices’ firmware. The problem? The faulty pacemakers are able to be hacked within a range of 50 feet. The recall is intended to prevent hackers from being able to disrupt the patient’s heart rate—either by accelerating or slowing it down, potentially disturbing or harming the patient’s health. The FDA notice states, “The FDA reminds patients, patient caregivers, and health care providers that any medical device connected to a communications network (e.g. WiFi, public, or home internet) may have cybersecurity vulnerabilities that could be exploited by unauthorized users.”

The average start time for most middle and high schools in the US is 8:03am. Some start as early as 7:40am, such as some schools in Louisiana, and some begin even earlier than that. According to a study done by the Rand Corporation, having later start times at public schools in the US could potentially save the country $9 billion in just two years. A later start time would theoretically result in well-rested teenagers which may reduce the risk of car crashes, has the potential to decrease crime rates, and may support the overall mental health of students. Right now, only 18 percent of schools start school at or after 8:30am. The study also notes that it is likely not covering the total potential benefits of implementing this new start time plan.

According to a paper published in the journal Proceedings of the Royal Society B, wild dogs in Botswana sneeze to signal to each other. Any time there were three or more sneezes, action was initiated in the pursuit of the hunt. Neil Jordan of New South Wales University had noticed that, in previous research, wild dogs sneezed before they went out hunting. The study was born out of his curiosity to investigate a link between the sneezes and the main consensus of the pack to go hunting. Jordan’s team studied five wild dog packs in the Okavango Delta in Botswana. They studied the dogs’ interactions in 68 different social scenarios over the course of 11 months. “The more sneezes that occurred, the more likely it was that the pack moved off and started hunting. The sneeze acts like a type of voting system,” Jordan said.

In November 2015, the board game Secret Hitler was produced by a team including Max Temkin, one of the creators of Cards Against Humanity. The game, which was crowdfunded on Kickstarter (raising nearly $1.5 million), involves anywhere from five to 10 players. The group splits into two—a large group of liberals and a smaller group of fascists. There is one Secret Hitler, whose identity is only known to the fascists, and the fascists are relentlessly trying to keep/put him in power. The makers advise people who “don’t think there’s anything funny or cool about fascism” to direct their complaints to President Trump.

A report released by the Benjamin Center at SUNY New Paltz, which shows detailed research suggesting that marijuana is not a gateway drug, states that the focus on criminal marijuana use is actually taking away resources from drug use that poses a bigger problem, like heroin and opioids. States have spent billions of dollars in an effort to extinguish marijuana use with little success—a 2013 Gallup poll revealed that marijuana use has remained relatively consistent from 35 percent in 1985 and 38 percent in 2013.

The original print version of this article was titled:
"While You Were Sleeping"