“Mr. Raymond Serrano, Noted Botanical Excursionist, Natural Illustrator, Intrepid Explorer, & Scientific Chronicler, Has Recently Returned from a Botanical Exploration Mission to the Mysterious and Hitherto Unexplored Tropical Island of ‘Wallaceana’” reads the invitation to Scott Serrano’s show at the Carrie Haddad Gallery in Hudson. Wallaceana is roughly the size of England, with no clear location; some place names are reminiscent of Brazil, some of Indonesia. Like Atlantis, it’s an ideal, near-mythical island. Serrano invented the place as a tribute to Alfred Russel Wallace (1823-1913), the British explorer, naturalist, and author of The Malay Archipelago.

In 1858 Wallace, while suffering from malarial fever in Indonesia, stumbled upon the concept of evolution. He wrote to Charles Darwin, which spurred the naturalist to begin On the Origin of Species. “That’s what inspired the whole project; read The Malay Archipelago and you get the sense of a man who has the spirit of a five-year-old boy running with glee,” Serrano explains. Explorers are true generalists—almost like artists. “Wallace’s books are filled with drawings of all the tribes, and what kind of food they ate. He just was a sponge; he took it all in with fascination and love. And when I read it, I thought, ‘It’s amazing that this is not taught in school!’”

The drawings illustrating Wallaceana and the accompanying wall texts depict a tropical paradise beset by contemporary evils, carefully symbolized. The social commentary is so subtle as to be almost subliminal. Influenced by the writings of Jorge Luis Borges and Philip K. Dick, Serrano creates imaginary tales that read like a geography textbook. “If people walk into my exhibition and say, ‘Somebody stuck art on the wall,’ I’ve failed,” Serrano admits. “If they walk up and say, ‘Is this a science exhibition?’ I’ve succeeded.”

“Kurtz’s Five Fingered Creeper,” inspired by Joseph Conrad’s Heart of Darkness, features a passion fruit named after Kurtz, the antagonist of the novel. The plant strangles tall, black-barked trees, symbolizing the effect of colonialism on Africa. The fruits in the drawing resemble shriveled human skulls. (This drawing is rooted in botanical fact: Passion fruit plants actually do strangle trees.)

For 12 years, Serrano was a performance artist based in San Francisco. In 2000 he received an Andy Warhol Arts Grant of $20,000 to dissect his own face—or, actually, a prosthesis of his face. “I let little kids come up and stretch my muscles off my face, and I sliced nerves off, autographed them, put them in specimen tubes, and gave them to the kids,” Serrano recalls. As part of his self-dissection, Serrano made meticulous anatomical drawings. This led him back to art on the page. Serrano experimented with different styles until he found one sufficiently antiquarian-looking. “All the pieces are based on Robert John Thornton’s Temple of Flora—romantic, Gothic, lush,” he notes. The plates of Thornton’s book, illustrated by Thomas Medland (1755-1833), are vivid and dreamlike. Serrano used a laborious stipple technique, requiring as much as a year to complete one drawing.

“Wallaceana” is part of a show titled “Great Pretenders: An Exhibit of Art Fakery,” which also features Mark Beard, Paul Chojnowski, Kahn and Selesnick, and Mark Catalina, and which will be exhibited at the Carrie Haddad Gallery in Hudson through October 11. (518) 828-1915; www.carriehaddadgallery.com. 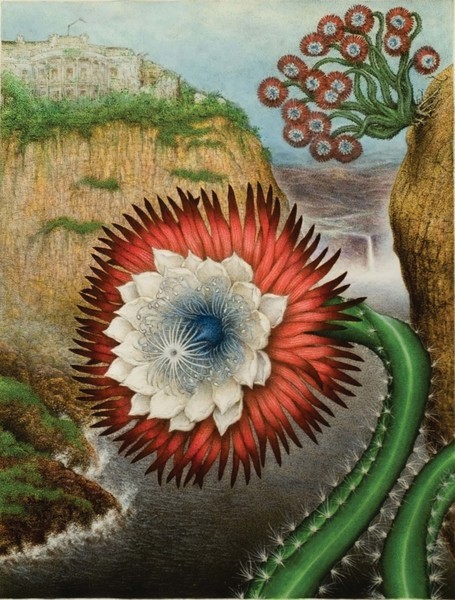