The Tower of Victory stands in a corner of the sprawling lawn at Washington's Headquarters State Historic Site, overlooking the Hudson River and Mount Beacon. The stone structure's arches frame a bronze sculpture of George Washington, who made Newburgh his home for a year and a half toward the end of the Revolutionary War. The tower was completed in 1887 to commemorate the 100th anniversary of the war's end. It's the nation's first, and perhaps only, Revolutionary War monument that symbolizes not the war itself, but the peace after it.

"The site stayed in the Hasbrouck family up until the 19th century," says Elyse Goldberg, historic site manager of Washington's Headquarters. "At which point it was put up for foreclosure." But, according to Goldberg, the community wouldn't allow for that. "They got together to save it, thus creating the first publicly owned historic site in the nation." One hundred and sixty-three years later, the community continues to assist the site in the form of preserving the tower, whose masonry, original roof, and viewing platform have suffered from storm damage. The site is about halfway to its goal of raising $1.5 million for the restoration project, and they hope to have the full amount by the end of the year. Such an investment, though, may raise questions for those familiar with Newburgh's struggles: Doesn't the city have bigger fish to fry than weatherworn statues?

To many, Newburgh is synonymous with bad news. In April, while sentencing a gang leader from the city, US District Judge Colleen McMahon called Newburgh "the most pathetic place in the State of New York." Its crime rate is just behind some of the country's most dangerous cities, and dilapidated buildings still feature prominently on many streets. A closer look at the city, though, reveals a more complex picture. Daily headlines about Newburgh seem schizophrenic: one day there's a new volunteer organization, the next a triple homicide. More and more, though, stories bearing good news are cropping up alongside the bad. If Newburgh is pathetic, it's not in the sense that Judge McMahon meant it. It's pathetic in the word's original sense, as in relating to the emotions. Newburgh's got heart—that much is clear in the push to save the Tower of Freedom, a symbol of peace that represents not only an important moment in the city's history, but also a continued part of its identity. Right now, the people of Newburgh are in their own moment of revolution. "It's time to focus on what is good about Newburgh instead of what is bad," says Mayor Judith Kennedy. "If we keep focusing on what we want, not on what we don't want, eventually we'll create what we want."

Good Neighbors
Washington's Headquarters State Historic Site is first and foremost an arbiter of Newburgh's rich history, which includes the feats that Washington accomplished during his stay there, like creating the badge of military merit, which was later reinstituted as the Purple Heart, and writing the Circular Letter, a 17-page note to the state governors that influenced the writing of the Constitution. Washington's Headquarters is an important historic landmark for Newburgh, so much so that the site's Hasbrouck House is the seal of the city. "We help the community by keeping that alive in people's minds," says Goldberg. The site, though, serves the community beyond its historical ties. In May, Washington's Headquarters hosted its third annual volunteer fair, which brought approximately 30 community organizations together. "There's a lot of hope here that the city and the people are worth investing in," says Goldberg. "If nothing else, it says people are doing something, and people are here to support each other." 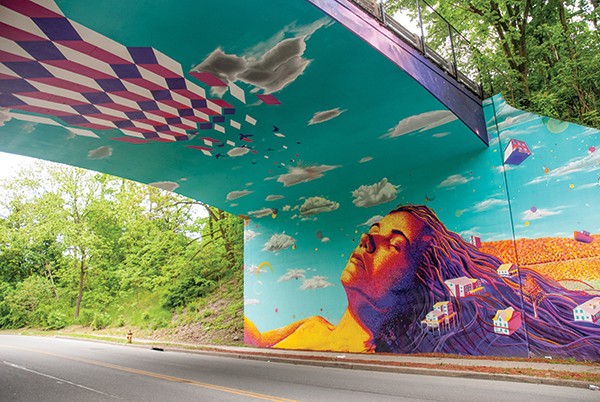 The support system in Newburgh is widespread, with new community-oriented organizations being established or improved upon each day. The Newburgh Armory Unity Center is a volunteer-run community hub, with a basketball court, a new indoor soccer field, community gardens, and a slew of educational programs, including literacy and acting classes. Another recent community development is the NewburghFoodCo., a food co-op where members order food online and pick up their groceries at a designated meeting spot. In a city without a supermarket, alternative food options are invaluable, such as Huguenot Street Farm's new Newburgh CSA, which offers weekly distribution at Safe Harbors on Broadway, as well as a free U-pick selection for members.

Community outreach in Newburgh emerges in unexpected places, too. At the one-year-old Newburgh Brewing Company, Paul Halayko, Christopher Basso, and Charlie Benedetti look for ways to assist local nonprofits in the best way they know how: with beer. In addition to brewing 18 different styles of beer (with a new style every month) and running a beautiful, rustic tap room, Newburgh Brewing hosts a variety of community events, including their guest bartending series. On Sunday afternoons, the brewery opens its tap room to charities and organizations, and all tips raised go to the guest organization. Newburgh Brewing's River Brew benefits the Michael J. Fox Foundation, and the brewery sometimes donates kegs to local restaurants to raise money for nonprofits, like Safe Harbours of the Hudson. Last month, a commercial real estate summit was held at the brewery, itself located in one of the city's beautiful historic buildings, a former paper-box warehouse. "We're trying to attract businesses to come back by highlighting why doing business in Newburgh is good," says Halayko.

Newburgh's natural and historical beauty—and the locals who enjoy it.

To Be For-Profit, Or Not to Be, That Is the Question: An Important Decision for Hudson Valley Entrepreneurs Sponsored