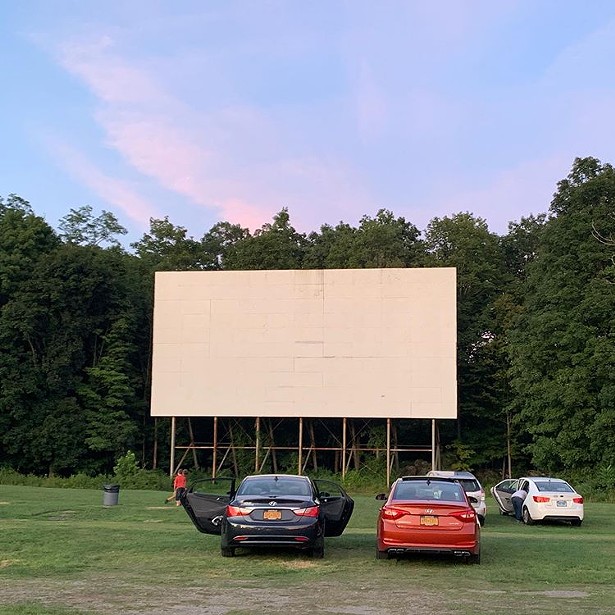 On Monday, May 11, Governor Cuomo announced in his daily briefing that certain “low-risk” recreational activities would be allowed to resume today, May 15, including gardening, tennis, and…drive-in movies! The announcement comes amid nationwide restlessness to reopen the economy, with more than 36 million Americans out of work.


Although we won’t be able to camp out on lawn chairs and picnic blankets, swapping anecdotes with our neighbors in the classic drive-in experience, the chance to get out of the house for a purely recreational outing is bound to feel like a treat. While Greenville Drive-In has chosen to remain closed for the safety of its staff and patrons, the rest of the region’s drive-ins are queuing up the movie reels. Here are their spring opening dates and what films to expect. (Don’t forget to check each venue’s website for new safety guidelines.)

This Hyde Park establishment is chomping at the bit, opening the first day they can, today May 15. From now through May 21, they will be screening Trolls World Tour and DC Comics’ superhero flick Harley Quinn: Birds of Prey. Next Friday, May 22 through May 28, they’ll be showing Jumanji: The Next Level and the Academy Award-winning action flick Ford v. Ferrari.

Although they will only be able to accommodate half their normal capacity, Warwick Drive-In will reopen to the public tonight, May 15, with three double feature that will screen all week long. On one screen: action comedy Bad Boys for Life, featuring Will Smith and Martin Lawrence, followed by sci-fi horror film The Invisible Man. On another Jumanji and Bloodshot, featuring the one and only Vin Diesel as the Valiant Comics superhero. And finally, for the kiddies: Trolls World Tour and Sonic the Hedgehog.

Jericho in Glenmont, outside of Albany, is also opening up tonight, May 15,allowing 300 cars for two screenings: Disney Pixar’s animated film Onward, and The Call of the Wild, featuring none other than longtime dreamboat Harrison Ford. Reserve your spot online, and be sure to read their list of COVID-era rules, including watching from your car, and not exiting the vehicle without a mask.

This family-run establishment has been in operation since 1950. For their grand COVID reopening on May 22, they will be screening the original Grease, which they no doubt showed when it hit silver screens the first time around 1978, and Sonic the Hedgehog, featuring Jim Carrey as the voice of the evil Dr. Robotnik. (Reportedly Adam Sandler called the Canadian comedian from the theater mid-screening to tell him how funny the flick was.)

Overlook will reopen its lawns and screens to the socially distanced public on May 22. They are coming out of the gate with Trolls World Tour for the kiddies and The Invisible Man, featuring Elizabeth Moss. The star of “Handmaid’s Tale” and “Mad Men” will be back on Overlook’s big screen again on June 4, for the premier of Shirley, in which she plays renowned horror fiction writer Shirley Jackson. Stay tuned for familiar sights; the movie was filmed locally at locations in Dutchess Ulster, Delaware and Greene counties, including Vassar College.

Averill Park-based Hollywood Drive-In, in Rensselaer County, is reopening with a bang, seven nights a week, starting May 22. In order to limit bathroom demand, they will only be showing one feature per night, and are leading off with Dreamworks’ PG-rated animated film Trolls World Tour.

Middletown drive-in Fair Oaks will open on May 22 with something old and something new. The classics: Indiana Jones and the Raiders of the Lost Ark and Bad News Bears. The new releases: Sonic the Hedgehog and Onward. Due to the social distancing policies Fair Oaks is implementing, they will be limiting the amount of cars admitted for each screen: 120 for Screen #1 and 80 for Screen #2. Reserve your ticket online.

Hi-Way Drive-In Movie Theatre in Athens and Greenville Drive-In are postponing reopening until they can roll out adequate safety measures and PPE for staff. However in the meantime, the Greenville theater will be hosting back-to-the-future-istic graduation ceremonies from the car. Woodstock Day School is one institution planning to have celebrate at Greenville with music, live-stream speeches, including a few surprise guests, and film clips shown on the drive-in’s 85-foot screen. Bring on the pomp, despite the circumstances.