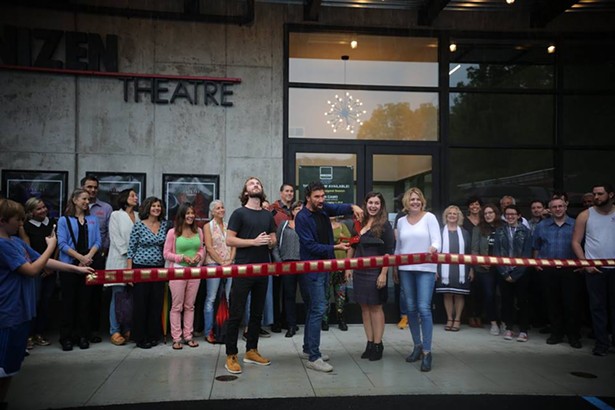 Denizen Theatre is the newest addition to the thriving art community of New Paltz. This black box theater with a flexible seating capacity of 50 to 70 seats sits atop the picturesque storybook village of commerce known as the Water Street Market, a quaint atmospheric community of nuanced businesses themed in art, culture, and spiritually minded crafts. According to cofounders Harry Lipstein and Ben Williamson, the name Denizen, which is displayed boldly by artist Chris Curnan on the side of the building, is a nod to Home (Den), Individuality (I), and Spirituality (Zen). "We share with all artists the fundamental reason for being in human form, which is to share love, and to in some way make people have an experience that allows them to be more empathetic with the world," says Lipstein. From a pedestrian's perspective, Denizen is framed by a man-made waterfall and a sculpture of a yogi in tree pose appearing to support the structure from below, as the community has supported Denizen since its inception in December of 2017, when the town board approved the project for construction. Since then, they have garnered support through various fundraising events, including a Kickstarter campaign that's raised almost $30,000.

Denizen Theatre is the brainchild of Harry Lipstein (architect, actor, and real estate developer), Ben Williamson (actor), and Brittany Proia (actor). The origin of this alliance was the Urbanite Theater in Sarasota, Florida, also founded by Lipstein, who is the owner of the Water Street Market. Discussions about the evolution of the Urbanite, between Harry Lipstein, Brendan Ragan (co-artistic director of the Urbanite) and Ben Williamson led to the idea of another theater, and soon found Brittany Proia joining the conversations. According to Williamson, the chemistry and language shared between him and Lipstein led to the vision that became Denizen Theatre. "Storytellers tell stories, they tell them from the heart, they tell them from whatever is true to them, and they allow that to come out in their own artistic expression. That's what we do here at Denizen," says Williamson. Denizen is a place where people can connect with their roots of story, while sharing a breath or two as a community. "There's such a sense of community here. I know that Denizen will be a beautiful addition to that community and, all we want to do is bring people together, share stories, and then talk about them," says Proia. "The intimacy found in black box theater can be likened to a family member telling us a story in our own home. Removing the separation of audience from performer by eliminating the conventional structure of a stage affords us the unique opportunity to connect intimately to the performance."

The debut production at Denizen will be William Francis Hoffman's "Cal In Camo," directed by Stephan Nachamie and starring Valerie Lynn Brett, Mike Skitberg, John Hartzell, and Craig Patrick Browne. "Cal In Camo," is an intricately woven story about the complexities of communicating and connecting across differences within family relationships. It explores both dysfunction and convention, along with juxtaposing the roles both play in finding common ground while growing through loss and feelings of inadequacy. This relevant, relatable story is set in the Midwest, around couple Cal and Tim. They are new parents who recently relocated from big-city life to a more rural, family-friendly setting. With humorous reverence, the play tackles issues of post-partum depression, grieving and loss, and the impact of secrets in relationships.