David Morris Cunningham Walkway Over the Hudson and the Mid-Hudson Bridge.

If you're looking for fine dining, The Would Restaurant offers it in an old-resort atmosphere. Originally part of the summer resort Hotel Di Prima, which opened its doors in 1926 serving primarily Italian-American visitors, the Would has a long history of warm hospitality. Guests have said that "the old resort atmosphere relaxes you and takes you back to slower days." On summer evenings, enjoy dining on the porch while watching the bocce players. In the winter, dine by a crackling fire with white linen tablecloths, candlelight, and fresh flowers. 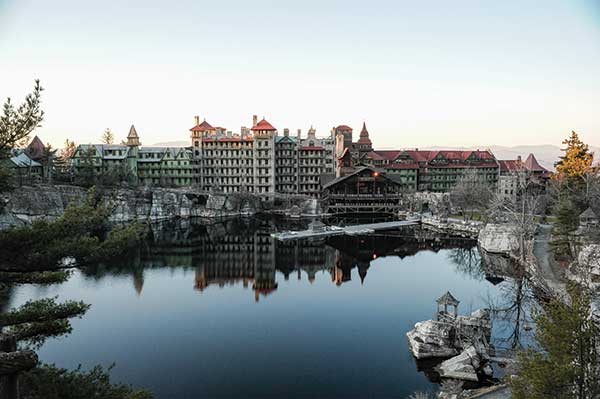 For a somewhat more rustic and decidedly more Teutonic experience, check out nearby Gunk Haus in Clintondale at the intersection of South Street, Maple Avenue, and Hurds Road. Gunk Haus serves up traditional German fare (all the sausages are made by Mark Elia) and a fine list of beers imported from Germany, as a well as a fine list of wines, all in a spectacular setting overlooking the Shawangunk Ridge. And if wedding bells are in your future, nearby Liberty View Farm will provide just the right mix of country charm and urbane elegance, all courtesy of farmer Billiam van Roestenberg (voted "Hottest Farmer in America" by the Huffington Post) and his partner Rene. For a relaxing country getaway, stay with Billiam and Rene in their farmhouse or in a deluxe yurt in the orchard.

Once through the stone gates of the estate, you'll be transported to a bucolic, self-contained retreat on the banks of the Hudson River. Recharge in one of the charmingly historic bedrooms or guest houses, enjoy a spa treatment utilizing home-grown fresh herbs, or take a stroll of discovery on a network of trails leading to ponds, the property's impressive namesake waterfall, wildflower fields, and lush gardens sprouting dramatic sculptures. You can also savor a memorable dining experience at Henry's at the Farm Restaurant.  In addition to rejuvenating Hudson River Valley getaways, the Inn is available for weddings, receptions, special occasions, and business retreats.

For those with a sense of nostalgia and a taste for the "old-school," John Foglia's Ship Lantern Inn on Route 9W in Milton is the oldest restaurant in the valley serving continental food, enjoying its third generation of family management. The building dates back to Revolutionary War days and its nautical décor features miniature sailing ships from Foglia's personal collection. Of historical note, Foglia, along with Chef Paul Boiardi, was one of the four original founders of the Chef Boy-Ar-Dee Company. But you won't find canned ravioli on the menu, which features such classics as cioppino and veal osso buco Milanese.

A bit further south, the town of Marlboro has, in recent years, become a hot spot for lovers of jazz and live music. The Falcon, brainchild of civic-minded musician Tony Falco, began in 2001 as a series of wildly successful house concerts featuring some of the best-and-brightest of the New York City jazz music scent. In 2005, Falcon Music & Art Productions, Inc. purchased a 19th-century button factory in the center of the hamlet of Marlboro, perched over the Marlboro Falls, once used to power the factory. The main floor of the building had also functioned as a roller-skating rink, community center, and cabinet factory. Now, it's become the "Village Vanguard of the Hudson Valley" —a rural mecca for the finest in jazz, blues, rock, and contemporary chamber music. Incredibly, there is never a cover at The Falcon—all donations to the artists are completely voluntary. Like Falco himself, the crowd at The Falcon is community minded and generously supportive of the arts. The Falcon now features a full dinner and Sunday brunch menu.

Housed in what was the oldest hotel still in existence in Marlborough, the historic Raccoon Saloon got its name from the family of raccoons that once lived there and would peek out through an opening in the wall to be fed by enthusiastic patrons. The raccoons are gone now, but owner Rita Truesdale has done much to preserve the 19th-century ambiance of the Raccoon, which offers an extensive menu that goes far beyond the burgers, which are among the best in the Valley.

The faces and places of Ulster County.