Who Got the Gunk? 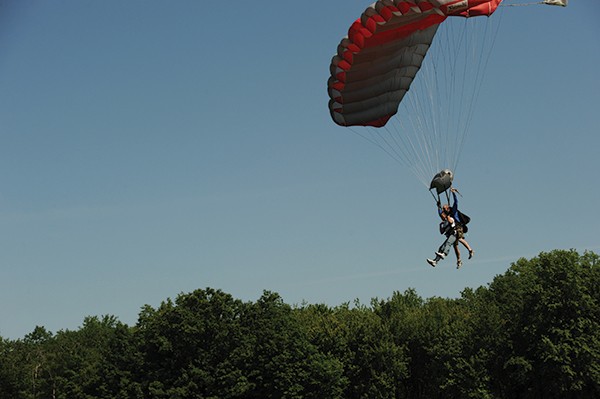 The region that includes the towns of New Paltz and Gardiner is set against the backdrop of the scenic Shawangunk Ridge, which stretches from the tip of New Jersey to the Catskill Mountains, and is actually the northern end of a long ridge within the Appalachian Mountains that begins in Virginia and continues through Pennsylvania and New Jersey. The name is derived from the Native American Lenape, and means, roughly, "in the smoky air." The Ridge is composed of layers of white quartz pebbles, sandstone, and dark gray shale that were pushed up in a northward plunging series of asymmetric folds some 270 million years ago.

That's old news—but there are quite a few more recent developments in these two towns that, though not earth-shattering on a geological scale, will nonetheless rock your world.

Life Is Sweet in New Paltz
Orgasmic and sinful have become the adjectives most associated with the consumption of chocolate. And though the Huguenots might not have approved, Lagusta's Luscious has been purveying handcrafted, artisanal chocolates just down the road from Historic Huguenot Street on 25 North Front Street for the past two years.

"My partner Jacob and I moved here right after the famous same-sex marriages in 2004," says owner Lagusta Yearwood. "We both had jobs where we could live pretty much where we wanted, and we were drawn to the lefty politics and local farms in New Paltz. I've loved it since the first day we moved. New Paltz is a nice mix of people who are used to a New York City-level of sophistication—and are excited about and actively looking for some of our weirder creations, like candied asparagus caramels."

Among her "weirder creations" are the famous Furious Vulvas, yonic-shaped confections that have been reported to have aphrodisiac effects. "I do have some male pals who won't go on a date without a box of them by their side," says Yearwood.

A commitment to living and working in an organic and environmentally sustainable way is characteristic of Ulster County in general, and the New Paltz region in particular. Lagusta's Luscious is a completely vegan business using 100 percent postconsumer recycled paper and packing materials. They compost all kitchen scraps, use all eco-friendly cleaning products and generate almost no waste.

Cupcakes got a big bump in the 1990s when they made a cameo on "Sex and the City," transforming them from a kid's birthday-party treat to a hip, boutique product. There's something special about getting your very own cake, cast into its own form and individually decorated, which simultaneously creates and satisfies a peculiarly obsessive desire. "Go ahead," it seems to say. "I'm just a little cupcake. You deserve it."

"Cupcakes have been around what seems like forever, but their recent popularity has definitely raised the question, how long will it last?" says Josie Eriole, owner of Moxie Cupcake, which has just opened in a new location on Main Street in New Paltz. Of the once-humble cupcake's newly found fashionability, Josie feels that "if you have a really great product—which I think we do—it will always be popular. Our cupcakes are different in many ways. They are all my own recipes, baked from scratch every morning. We only use the best ingredients, including fair trade organic cocoa, European butters, pure, local maple syrup and honey, local dairy, and as much local produce as we can. I truly care about each and every cake and want them to be a personal indulgence that is worth it."

Eriole and her staff have been overwhelmed with the popularity of the shop since reopening in a new location on Main Street this June. "It has been received so well, we are still playing catch up and finding our way, adjusting to the volume of new customers. We do a lot of catering, but it's the shop and the people in it that I love the most about what I do, which is why I made the move to a bigger, more visible and comfortable location. I love being a host to so many different people who come away with the same satisfied feeling."

Moxie is great all week, but Sundays are special—check out their Sunday Morning Cupcake, a French toast-inspired confection sprinkled generously with cinnamon before baking and doused with 100 percent local maple syrup before being topped with maple buttercream and crispy pieces of organic bacon.

These scenic, historic towns along the ridge continue to grow and evolve.