While the pandemic postponed many plans, Toasted, Newburgh’s new artisan bistro on Liberty Street, would have remained a “pipe dream” of Sam Satanovsky’s without COVID-19. His friends Eli Vaknin and Daniel Gilbert had been living in Newburgh since 2012, running a property management and redevelopment company. They had thrown around the idea of opening something up in Newburgh but never with much weight behind it, until Satanovsky’s job as an event catering chef in New York City shut down due to the pandemic. Satanovsky went upstate to visit Vaknin and Gilbert without any plans, and they presented him with a 120-year-old run-down building on Liberty Street. “Screw it,” he said. “Let’s open a restaurant.”


Satanovsky had been visiting Newburgh for a few years and noticing its emerging business sector. He went out for tacos on a random Wednesday and was met with an hour and a half wait, proving to him that “Newburgh was ready for more,” he said. He stepped in to provide it with Toasted, which opened May 4.


Toasted’s motto for food, which consists of mostly sandwiches and salads at the moment, is “simple yet delicious.” Satanovsky wants to let the main ingredient in each dish speak for itself. The fried chicken sandwich has pickles, Sriracha mayo, and not a lot else, because as he says, “that fried chicken is so delicious. Why cover it up with a bunch of random stuff?” 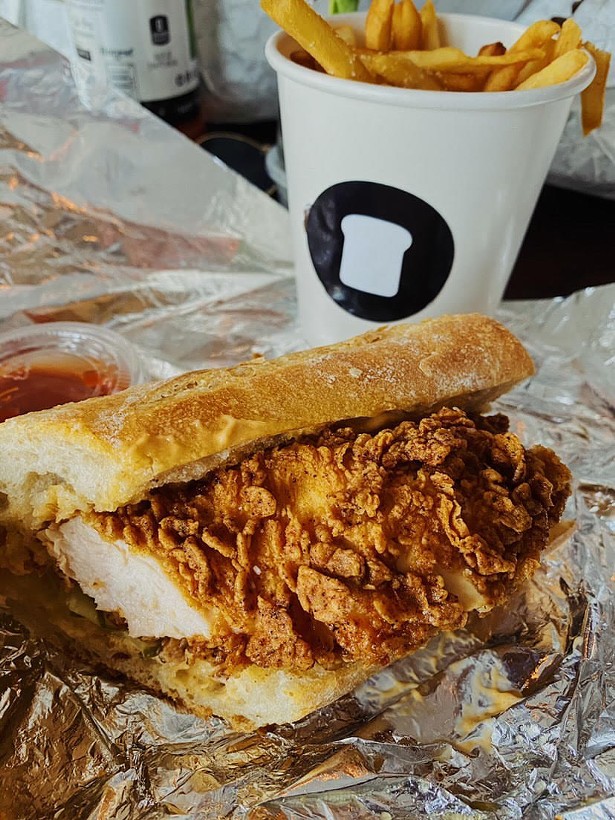 Satanovsky’s instincts have been proven right: Toasted just sold its 100th fried chicken sandwich this past Saturday after just two weeks. To him, ingredient quality is directly correlated with its freshness. Their main purveyor, Baldor Foods, often switches out products at the last minute if they can find them closer to Newburgh. Satanovsky orders inventory every day so that the ingredients he’s using are either from that day or the day before. He’s adamant that he’d rather sell out of a dish than use old ingredients.

Satanovsky worked as a dishwasher at a local restaurant in high school and climbed the ladder to eventually be one of the chefs. He received his degree in culinary arts in 2013 from Johnson and Wales University and went on to Pace University for a BBA in Hospitality and Tourism Management. For the last five years he worked as the "captain" of private events New York City at the NoMad Hotel, a Michelin-starred kitchen with rooftop dining. Like in high school, he started as the food runner and worked his way up, and by the end of his stint, he was commandeering NoMad’s private events on the roof for three years. Now he wants to bring that quality to Newburgh, but “make it a little more approachable.” Toasted’s mission is to create dishes that would cost $30 or $40 at a place like NoMad but for half that price.


Toasted’s confounded all grew up together in Sullivan County. Vaknin was Satanovsky’s best friend from high school, and Gilbert the older brother. When Satanovsky went to New York City, Gilbert and Vaknin went to Newburgh. Satanovsky sees his friends and partners, who are also Pace business graduates, as being at the forefront of Newburgh’s redevelopment boom with their company Fidelity Real Estate Management LLC, which they started in 2012. According to Satanovsky, they “hang onto their buildings, they put a lot of love and care” into them and find “sustainable tenants” that are going to live there for a long time, foregoing better rent for better people.


Gilbert and Vaknin wholly or partially own multiple buildings in Newburgh, along Liberty Street in particular. The century-old building that now houses Toasted was previously condemned and, per Satanovsky, “absolutely disgusting.” Gilbert and Vaknin had to convince him of the building’s potential. Post-restoration and renovation, the difference is “night and day,” according to Satanovsky. The storefront is now painted a mint color, with plants and outdoor seating flanking the doorway. A round wooden hanging sign with a toast-shaped hole cut out signals the restaurant’s existence to passersby. Like the eatery’s name, the wordless sign emphasizes simplicity. Satanovsky wanted one word, something catchy that reflected their bistro lunch menu, on which most of the sandwiches feature toasted bread. It’s also a cheeky nod to getting drunk. They’re currently working on securing their liquor license, and soon you’ll be able to get toasted at Toasted.


The restaurant is in its third week, and not a single dish has been sent back to the kitchen so far by customers, which Satanovsky sees as evidence of a positive reception with locals. Add to that their “amazing” reviews on Google about the food and service, and Satanovsky is feeling pretty good. He sees new customers every day, but also a lot of repeats; one man comes in almost every day for the same sandwich, which is “pretty sweet” to see. While it’s mostly a local lunch crowd on weekdays, like employees at neighboring businesses or the fire department, weekends see waves of New York City visitors.


In the future, Satanovsky envisions brunch and dinner menus and a backyard beer garden, with gravel underfoot, tables and chairs, and a stage for live music. He imagines the patio hosting small concerts on Friday or Saturday nights. Standing, there is space for 60 to 100 people. If these visions come to pass, Toasted will “reach its capacity” for renovations, Satanovsky says. “Then it’s on to the next project.”