Collecting dust is just part of the beauty of the exhibits at Storm King Art Center. So is strolling across knee-high fields of Hudson Highland grasses (and maybe even getting a touch of sunburn). The outdoor sculpture park’s mammoth works of art consciously exist against a background of earth and sky. The wear and tear of the seasons joins color and medium as part of the artist's creative process.

The center was founded in 1960 by Ralph E. Ogden and H. Peter Stern. A museum of Hudson Valley artists was originally planned, but the vision for Storm King was turned out-of-doors after Ogden visited sculptor David Smith’s residence in upstate New York. Ogden was impressed by his oversize stainless steel and bronze creations standing in fields around the house. Thirteen Smith sculptures became the foundation of the Storm King collection.

Since then, Storm King has transformed from overworked farmland into a mountain-framed, 500-acre creative landscape with approximately 100 monolithic exhibits. Among the most iconic structures at Storm King is Mark di Suervo’s Mon Pere, Mon Pere. The 40-foot-tall, bright orange sculpture’s industrial steel beams reach up to the sky like open arms.

Storm King’s metal artwork is balanced with sculptures composed of natural elements. Maya Lin’s Storm King Wavefield explores the relationship between movement and stasis, especially when the wind blows the grasses on the 15-foot-high "waves." Like Lin, Andy Goldsworthy used found materials for his creation, Storm King Wall. Inspired by the property’s dilapidated stone walls, Goldsworthy created a 2,278-foot-long stacked stone sculpture using no mortar that meanders across the fields and curves tightly around 100-year-old oaks and maples.

Each visit to Storm King is a new experience, as the light shifts and the seasons change. On a stormy day, shadows surrounding a sculpture can make it look like an apocalyptic vision, while under a cloudless summer sky, the same piece might convey feelings of tranquility and connectedness to the Earth.

Fortunately, one thing Storm King’s visitors can expect to remain the same is an undisturbed mountain vista behind the sculptures. The center actively works to protect its “view-shed” and 2,100 acres of Schennemunk Mountain is now preserved by the state. Conservation is integral at Storm King at all levels, from combating invasive grass species to preventing rust on a sculpture, making the center not only a place where art and nature can exist side by side but also a conscious reminder of the needs they share. 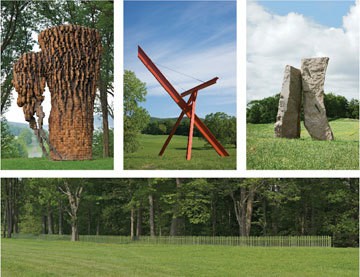