Films about food have a long history, ranging from sensual pleasures like Tampopo or Babette's Feast to sobering documentaries like Food, Inc. or Supersize Me. There are some worthy new additions to the genre, all independent, that merit watching for anyone interested in the subject, and all three are watchable in your very own home (or will be soon).

Farmageddon It?
A few years ago, Kristin Canty, a stay-at-home mother of four from Massachusetts, became outraged that the raw milk she gave her son to cure his allergies was so hard to get, and that many of the farmers she met as she educated herself about her food supply were having legal issues. Eventually, not finding anybody willing to make a film on the subject, she took out a loan and made it herself. Farmageddon (on DVD and Netflix) illustrates the many ways in which legislation (mostly Federal) is designed by big agribusinesses to exempt themselves from scrutiny and food safety standards, all the while using those laws as weapons against small farmers who practice the sort of agriculture that actually looks like agriculture.

Joel Salatin, featured prominently in Michael Pollan's The Omnivore's Dilemma, offers perspective, as do other experts and the affected farmers. The film is a vivid reminder that the kind of farming we want is under attack from the kind we don't. One-size-fits-all regulations are a disaster; the big companies whose products actually kill people—like ground beef, peanut butter, and spinach in recent memory—escape any consequences while small family operations can be bullied out of business, allowing for still more consolidation of the industry. Organic farmers have to fill out mountains of paperwork, while "conventional" growers (meaning they use synthetic fertilizers and pesticides) do not.

We witness the dismal sight of a Georgia buying club's members forced to pour out their weekly delivery of milk—milk they have paid for; it's their property—while inspectors look on. We meet the Faillace family, who raised sheep in Vermont, only to have their entire herd confiscated and destroyed by the USDA due to a stated concern about mad cow disease in the animals. A prolonged legal battle resulted in the release of information proving that there was never any evidence of any disease or contamination. We learn about similar raids, often involving armed law enforcement, around the country, amid much worry that this will become the rule rather than the exception. The film is especially troubling because it shows how Big Government, that supposed bugbear of the Right, is actually brought to bear on practitioners of organic, sustainable agriculture rather than industrial corporations. Raw milk is more regulated than guns. 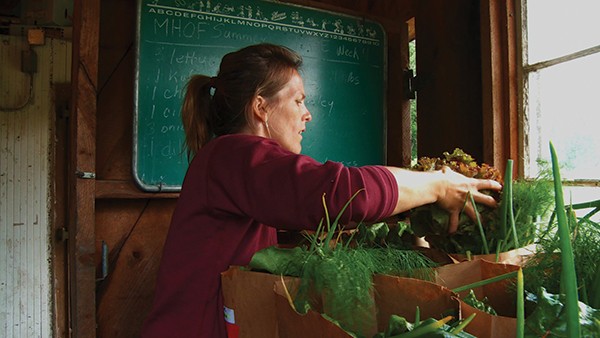 Hunger and Obesity Meet in the Processed Food Aisle
It's important, when discussing issues surrounding our food supply, to talk about hunger, now epidemic in the world's richest country. A Place at the Table is a new documentary (in theaters, on demand, iTunes) by Kristi Jacobson and Lori Silverbush that addresses hunger in America and is unequivocal about its causes. One in six Americans is food insecure, meaning they are not sure where their next meal is coming from, and half of all children in this country will be on some form of food assistance in their lives. The arguments are presented clearly, with accessible graphics, and the conclusion is inescapable: The many billions in subsidies given to huge commodity growers make unhealthy processed food cheaper and fruits and vegetables more expensive. The national explosion of obesity since 1980 tracks almost exactly with the decrease in the cost of processed foods. 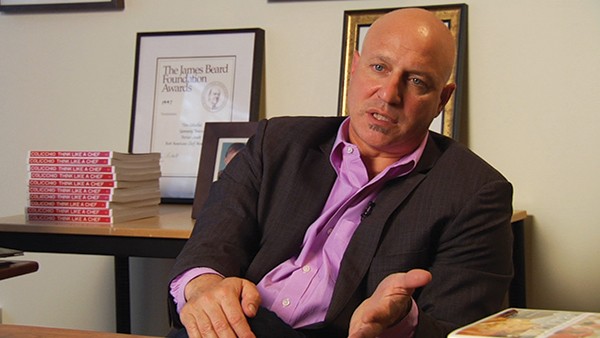 The film makes it easy to see how obesity and hunger go hand in hand; when money is tight, people opt for cheap calories like soda, chips, and fast food. People living in food deserts—areas without access to a proper supermarket—often have no other options anyway. The film makes it clear that charities and food banks, while important, are just bandages; the cure is a change in Federal law that cuts subsidies for commodity crops and provides assistance to hungry people. We're treated to a synopsis of the grisly legislative sausage making that resulted in the Healthy, Hunger-Free Kids Act, a school lunch program reform (half of which, with depressing irony, was paid for with cuts to food stamps). The increase in funding for this much-touted improvement to an essential program? Six cents per child per meal. The actor Jeff Bridges, also an anti-hunger activist, has the best line of the film: "If another country was doing this to our kids, we would be at war."

We see one young mother, who finally gets a full-time job after a year of searching, only to find that the modest salary disqualifies her from getting food stamps, making it even harder to feed her children. We meet Rosie, a sweet fifth-grader in Colorado, who cheerfully explains that it's hard for her to concentrate at school because all she can think about is food. A cattle rancher—a real cowboy, that most American of icons—takes a second job as a school janitor to feed his family. We watch a police officer who uses a local food bank correct his initial use of the word "humiliating" by changing it to "grounding." 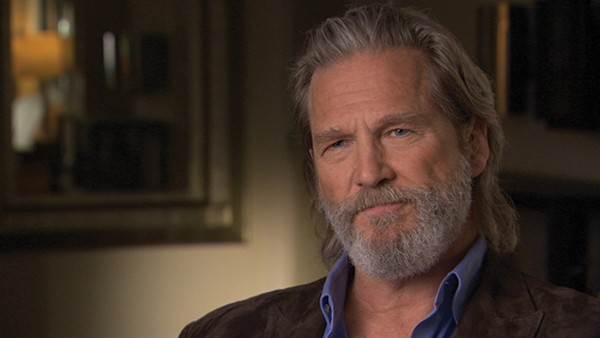 These documentaries, though disheartening, are also galvanizing. There is work to be done: elected officials to call, farmers' markets to support, buyers' clubs to start, processed and GMO foods to boycott. While it's hard to expect much legislative change any time soon, a lot can happen if enough people make a fuss. And it's important to remember that eating, besides being a biological necessity, is also sublimely pleasurable. The simple act of growing and cooking real food for oneself can be seen as a form of political activism, and one with persuasive power, since people can taste the difference: A Place at the Table shows a moving scene of young children ecstatically eating their first honeydew melon, and shouting unanimously that they would prefer it to chips as a snack. 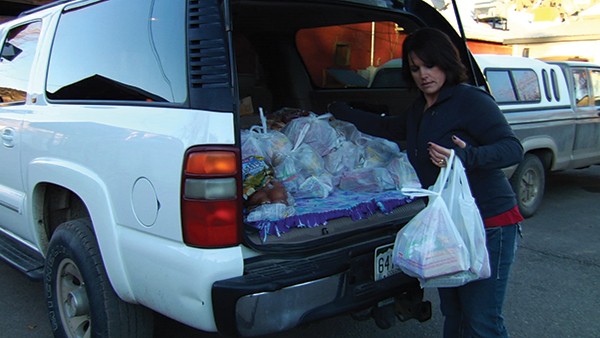 Fungus Hunting
While documentaries take a didactic approach to their subject, fiction can ask questions without answering them. Art changes consciousness differently, but no less powerfully when it's well done. Now, Forager is an independent drama co-directed by Julia Halperin and Jason Cortlund, who also wrote the screenplay and acts in one of the lead roles. The film follows Cortlund's Lucien Echevarría and his wife Regina (Tiffany Esteb) as they forage mushrooms for New York City restaurants, and it explores the tension that grows between their diverging desires: Lucien is highly idealistic and uncompromising, which causes tension in their relationship; he only wants to forage, following the mushroom season all the way down to Central America in winter rather than working in restaurants to support themselves in the off-season, while Regina, craving more stability, is keen to take a steady cooking job.

Both paths prove to be difficult: Lucien is robbed of his haul in the woods, and Regina goes all the way to Rhode Island to take a job at a "Basque" restaurant that turns out to be a dire greasy spoon where the specialty is something called "meat babies." A wealthy and hilariously horrible housewife, for whom money offers the only meaningful measure of food's quality, hires Lucien to cater an event at her house, and their scenes show the exact point at which his professionalism and need for the job are trumped by his visceral disdain for his employer. 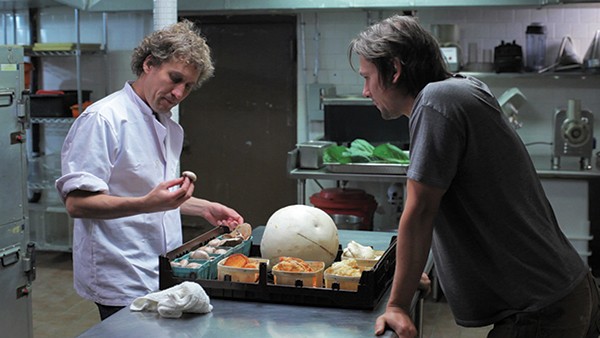 The fact that both Lucien and Regina are Basque-Americans connects them to a tradition of fierce independence and deep culinary tradition, as well as the cutting edge, since Basque cooking is among the most influential roots of the new globally aware yet locally sourced cuisine. The film celebrates supply, not demand. There are none of the lavish feasts or lingering food-porn close-ups that many films about food traffic in; instead we watch Lucien, alone in the woods, make himself an omelet with ramps, morels, and wild turkey eggs on his truck's tailgate with a camping stove.

The movie unfolds gradually, rewarding patience—paced to match the Slow Food movement that it quietly explores a slice of. Halperin describes the similarity between their observational style of filmmaking and mushrooms: "They can't be cultivated, they grow in their own time." (The directors had a plan B script ready in the event the weather was dry and there was nothing growing in the woods. The film was filmed, in part, in the Hudson Valley.) As a study in the friction between ideals and the real world, in the context of sourcing food, it's not so far from the documentaries: What we eat and where it comes from says a lot about who we are.