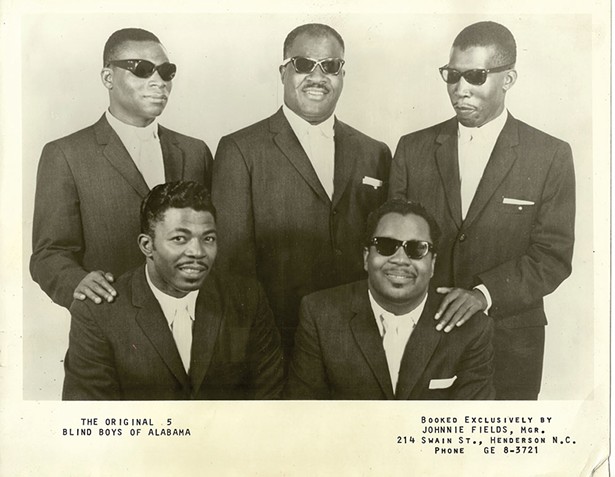 Chronogram staffer Peter Aaron corresponds with filmmaker Robert Clem about the new documentary to be screened at Rosendale Theatre.

"In the African-American community," writes theology professor and musicologist Pedrito Maynard-Reed, "music is to worship as breathing is to life." Which is to perhaps crystalize the mystifying power of black American gospel music: While firing up its performers, gospel has elementally shaped rhythm and blues, rock 'n' roll, soul, and other subsequent genres and appeals to diverse audiences around the world. It's gospel's history, along with its impassioned and indelibly infectious fervor, that's explored in How They Got Over: Gospel Quartets and the Road to Rock and Roll, a new documentary by Robert Clem that will screen on May 13 at the Rosendale Theater as part of its Local Connections Festival.

Produced by Stone Ridge resident Clem over a 12-year period, the film features vintage performances by the Blind Boys of Alabama, Sister Rosetta Tharpe, the Soul Stirrers (who included a young Sam Cooke), the Blind Boys of Mississippi, the Davis Sisters, the Fairfield Four, the Sensational Nightingales, the Dixie Hummingbirds, the Mighty Clouds of Joy, the Highway QCs, and other icons, as well as interviews with legendary singers who've since passed on. Clem answered some questions about the documentary via email, which are found below.

How They Got Over: Gospel Quartets and the Road to Rock and Roll will be shown at the Rosendale Theater on May 13 at 7:15pm. Filmmaker Robert Clem and associate producer Jerry Zolten will discuss the film after the screening. Call for ticket price. (845) 658-8989, or visit the event page on Rosendale Theatre's website.

It's interesting that you're originally from Alabama but you didn't really develop an interest in gospel music until you were living in New York and saw the Blind Boys of Alabama perform there. What do you remember about that concert?

The Blind Boys of Alabama were one of many black gospel groups in the 1940s, '50s, and '60s famous among African Americans but unknown across the color line, both in the South and North. Growing up in Alabama, I only heard white cover versions. The epiphany I had in New York was in the mid-'80s, when [Broadway musical] "The Gospel at Colonus" by Lee Breuer and Bob Telson was at BAM. They had the Blind Boys collectively play Oedipus, emerging from the depths. The harmony, energy, and sense of humor of my fellow Alabamians the Blind Boys knocked me out, and somewhere along the line I decided to make this film.

What is it about gospel in general that initially attracted you to the music and fascinates you?

I'm not attracted to gospel choirs and soloists, but to the smaller groups, male and female, who tended to mix spirituals with entertainment and were the precursors of rock 'n' roll. They mixed in showmanship and style—what came to be called "gospel drama." "It wasn't a matter of how many were standing," says the late Otis Clay in the film. "It was how many was laid out." But I also appreciate how this music was, as some have said, a soundtrack for the struggle for black civil rights; how quartets were like messengers on the road, traveling the chittlin' circuit and constantly threatened by Jim Crow and the highway patrol.

Some nonreligious people assume they won't be able to enjoy or relate to gospel music because of the lyrical themes. What would you say to convince them otherwise?

Bob Marley mixed in religious themes and it was great music. I would say groups like the Staple Singers, Davis Sisters, Soul Stirrers, Blind Boys, and on and on—they could sing! Adding guitars and drums over time, they also knew how to put on a show. If you don't like harmony, don't bother. But in the pre-rock 'n' roll era, all the great lead singers sang gospel. In the end, it's about the music, the energy, and the beat. As for the words, even if they mean nothing to you, they did mean something to them and are what energizes the music.

Recently there's been a resurgence of interest gospel and other roots-music styles, especially, it seems, among younger listeners. Why do you think this is the case?

Maybe it means that younger listeners are becoming more like Europeans! Europeans have always loved gospel, and quartet music in particular. I think they appreciate the artform (even though they often can't understand the words) and the positive energy in the music. It comes from a real place, it seems authentic. They appreciate how the music reflects the struggle of black people in America. I think maybe younger people are approaching it the same way.

What do you most hope audiences get from seeing the film?

Naturally, I hope audiences share my enthusiasm for the subject matter. I learned quite a lot from making the film and met a lot of great people, many of them now gone. I hope the film effectively tells their story, and I trust their music to do the rest.

The original print version of this article was titled:
"Are You Ready to Testify"