Back in 1991, Peekskill, NY was the first of the Hudson Valley river towns to actively market itself to artists, advertising live/work loft space at favorable terms in Soho magazines. The late '90s saw the first annual Open Studios tour, contemporary art collectors Livia and Marc Straus founded Hudson Valley MOCA in 2004, and by the mid-teens, the New York Times was praising the results of the arts-forward approach to revitalization and adaptive reuse. According to a 2016 piece in LoHud, Peekskill “provides an example of a local community that targeted a specific demographic in its effort to kickstart a barren downtown.”

The Fighting City: Peekskill
Peekskill dispenses with pretense in an earnest effort to redefine and revitalizes itself.
By Timothy Malcolm
Peekskill
And in 2021, Peekskill’s artists, visitors, and residents will begin enjoying the arts center this sensible town deserves. Site plans call for the Peekskill Art and Media Center to occupy an existing 24,000-square-foot structure at the corner of James and Howard streets. At various times, the 1887 building has been a livery stable, auto repair shop, and storage facility.

Plans—and a newly named board of directors—were unveiled at a Common Council meeting last November by community-spirited developer Ben Green, owner of the 100,000-square-foot Hat Factory, where half the tenants are media businesses.

“We know this is a long time coming,” Green told the council. “A quarter-century in the making. It feels right to do this now, to capitalize and expand on all the momentum that the community has contributed to over the past decades, and to deliver on the promise of Peekskill as a thriving artists’ enclave. Everyone working on our team believes it is a privilege to make this project happen. Vibrant cities have art centers. It is time for Peekskill to join those cities.”

The mixed-use blueprint developed by architects Ray Wobbe and Jonathan Walko of the Stephen Tilly architectural design firm includes a visual art center, two cinemas, classrooms, commercial office space, and a coffee roastery. The 4,000-square-foot visual art space will feature a showplace gallery with see-through walls, suitable for exhibitions and public or private business and social events. Classrooms adjacent to the gallery will serve a full range of instructional arts programs for children, adults, seniors, and the differently abled. 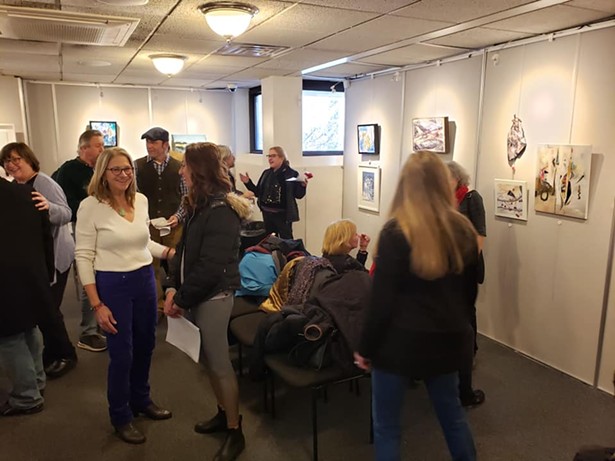 Also in the plan: a 4,000-square-foot James Street Cinema and Playhouse, which will house two separate theaters. The larger cinema, with a seating capacity of 109, will be designed to accommodate a movable stage that transforms it into a live performing space that would seat 98 and meet Actors Equity Association union standards. A smaller art cinema will seat 49.

On the second level, Green plans to offer a dozen commercial spaces for rent, two of them multimedia-ready and connected to the larger theater, converting it into a sound stage for the production of audio, video, and multimedia content.

Stephen Tilly Architects, Wobbe told the council, is up to the task, with a project portfolio that includes Film Forum in Greenwich Village, Dobbs Ferry Playhouse, Lyndhurst mansion in Tarrytown, and the Music Conservatory of Westchester in White Plains. The plan will incorporate solar and other sustainable building tactics.

The idea is “a private/public ecosystem built from the ground up," says Greene. "A partnership for commercial and not-for-profit activity fortifies and expands each other’s potential and opportunity.”

Peekskill’s mayor, Andre Rainey, called the plan for the center “amazing” and predicted swift success. Councilwoman Patricia Riley, a retired teacher who focused her reelection campaign on keeping Peekskill “the envy of Westchester” while maintaining its inclusive and affordable spirit, was equally impressed. “As a lifelong resident of Peekskill,” says Riley, “this makes me really happy.”