Amber Winick is about to roll double sixes. The author and design historian has spent her professional life thinking about domestic space—most recently, studying the intersection of design and motherhood. In order to balance her burgeoning professional career with her role as a mother at the center of an actual domestic space, Winick has developed a philosophy she sums up with a word: Aleatory. “It literally means ‘depending on the throw of the dice,’” explains the mother of two. An adjective derived from the words for “dice” and “dice player,” it refers to actions determined by chance and characterized by flexibility. It’s a concept adopted by European classical composers and other artists who used chance to determine their work. “Aleatory, by nature, is determinable by chance, and when I think about my style in home, fashion, and even my life trajectory—I definitely feel close to this concept.”

It’s an approach Winick likens to the Japanese idea of wabi-sabi—that is, appreciating beauty that’s imperfect, impermanent, and incomplete in nature. “For practical as well as philosophical reasons, I try to embrace the beautiful chaos, as well as the incomplete and constantly shifting nature of my home, a place that I share with children, a dog, and a partner. Rather than reaching a static sense of ‘finished,’ I try to see my home as an ever-evolving setting for us all to be and connect in,” she says. 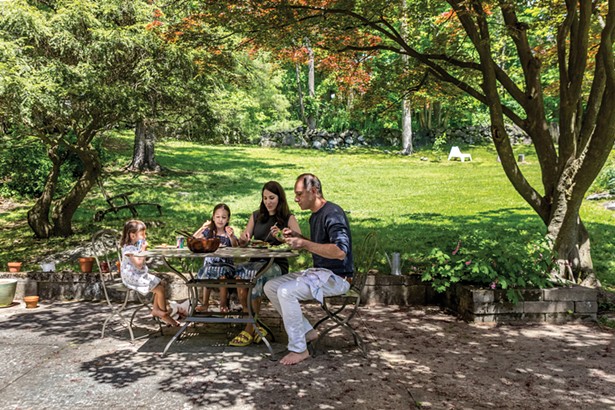 Initially, it may seem odd comparing a game of chance to domestic life, but anyone—parent or no—enmeshed in family life understands human nature can be as capricious as any roll of the dice. And the philosophy does seem to be working for Winick. The village home she shares with her growing family is deceptively down-to-earth—sweet, charming, and uncluttered. Set in a cul-de-sac lush with flowering trees and neighborhood gardens, offering flashes of the nearby Hudson through branches and over rooftops, the 100-year-old home sits on just under an acre of hillside. Although simple in design, all the elements of the rambling 2,200-square-foot space have been carefully considered to allow Winick and her brood to fully embrace the evolving nature of family life. If one key to domestic equanimity is a fully engaged, happy family, the home’s interior arrangement is an example of how smart, human-centric design can be key to achieving that aim.

In fact, it seems Winick’s aleatory approach is working for her across the board. In September, her project Designing Motherhood will be fully released to the wider public. A collaboration between Winick, writer and designer Michelle Millar Fisher, and the Philadelphia-based Maternity Care Coalition, the project engages multiple formats to explore the subject of design for reproduction, pregnancy, birth, and postpartum: “investigating over 80 designs—iconic, profound, archaic, titillating, emotionally charged, or just plain odd—that have defined the relationships between women and babies during the past century,” according to the project’s website. The release includes the publication of their book Designing Motherhood (MIT Press), concurrent exhibitions at the Mutter Museum and the Center for Architecture and Design in Philadelphia, and a related design curriculum. According to the project’s website, September is also the due date for Winick’s third child. “It’s an incredible and unexpected confluence of so many of my personal and professional goals,” she explains. 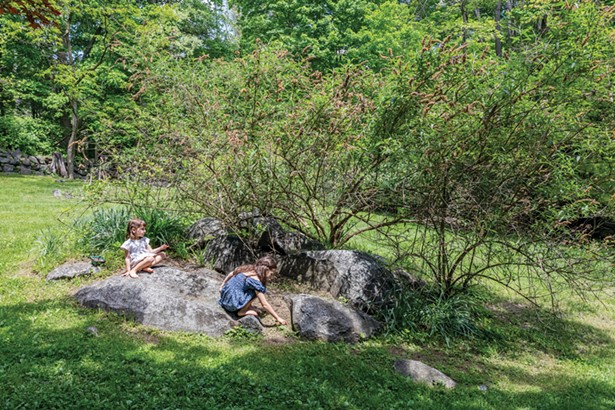 While Winick’s work focuses on how design solutions can not only improve the experience of parents and children but sometimes completely revolutionize those experiences. To her, great home design begins not in a space or object, but rather in community. Originally from Miami, Winick attended school at Sarah Lawrence College and then the Bard Graduate Center in New York City. After graduating with a degree in design history, decorative arts, and material culture, she decided to settle in New York City, where she met her husband, Daniel Bloomberg, a digital design consultant. After they had a child in Brooklyn, they decided they wanted to be close to extended family. “My husband’s family is in the Hudson Valley,” explains Winick. “And we were interested in having a multigenerational experience, with a thick sense of family around.” (Winick’s mother is soon relocating to the area from Miami as well.)


In 2016, they decided to move to Croton-on-Hudson. A white, wood-clad, two-story home caught both their eye and their imagination. Situated on one of the oldest streets in the village, the 1920 home was built from materials left over from the construction of the nearby hand-hewn Croton Dam. “The lore is that the Italian stone masons and bricklayers who helped create the dam transported extra materials to help build homes in the area,” says Winick. The area’s history as a former artists’ colony also appealed to the couple, and Winick even felt a connection to the home’s very street. “Our street in particular was home to a Bauhaus weaver and puppeteer named Ethel Stein, who created the TV character Lamb Chop,” she says. “As a design historian, stories like these definitely captivated me and lured me to the area.”

The home needed some work, however, and initially Winick and Bloomberg attempted some of the renovation themselves. “When we moved in we had big dreams for all we could do with it,” says Winick. “But the reality is that we’ve had to improve slowly and strategically.” Previous owners had split the home into a duplex, with one half used as a dental practice and the other as a rental property. The couple began by removing a central dividing wall, integrating the two spaces into one three-bedroom, two-bath home with ample office space.

At the rear of the house, Bloomberg removed a wall between two of the former dental offices to create a large, garden-facing writing studio for Winick. The space also doubles as an ad-hoc art studio and homework nook for the couple’s school-aged daughters. Bloomberg converted a third dental office into a smaller work-from-home space for himself. He also added a skylight to what was once the dental office waiting room, converting the space into a play alcove for their children. Sitting at one end of the street-facing living and dining room, the space allows the children to be a part of the main living area while also having ownership of their own space. “It also allows me not to be helicoptering them all the time,” adds Winick. 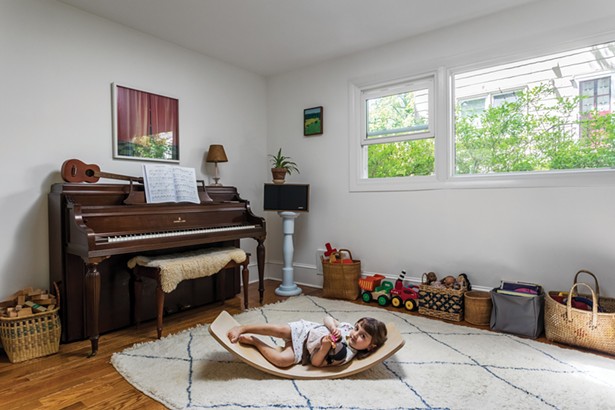 The couple hired local contractor Colin Cuite to restore the home’s central wood staircase. Upstairs, layers of old carpet and vinyl tiles covered pine sub-flooring. “I absolutely loved that this beauty and simplicity was hiding underneath the layers of flooring and glue,” Winick explains. Cuite and his woodworking team restored the plank floorboards throughout the second floor. With the polished-plank flooring, large windows, and white-washed walls, the upstairs has an airy, open feel. Low bookshelves along a hallway wall were left by previous renters—Winick loved them and elected to keep them in place.


Winick and Bloomberg have decorated the interior spaces with a light touch, mixing the necessary and the beautiful with an eclectic collection of cherished objects. “I love lots of natural light, simple open spaces, and filling space with space itself,” she explains. “So much of my style is based on what is occurring within the home—I take real joy in shifting my spaces, and I love shedding objects—maybe even more than acquiring them. I think of my home as a space to play and for alchemy.” 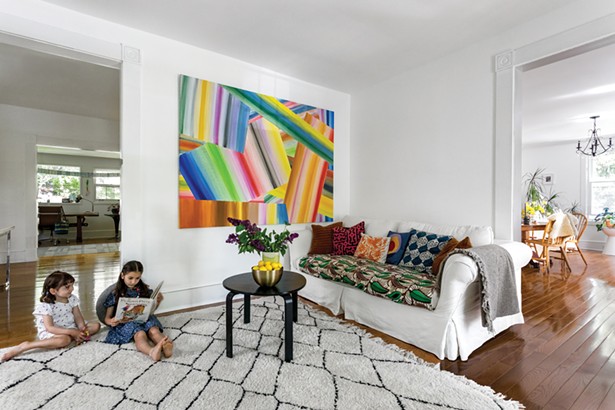 At present, the walls feature a mix of art created by the couple’s friends and children, paintings by local Hudson Valley painters, and a few pieces by Miami-based Haitian artists. Antiques inherited from family or gleaned from thrift stores and the street are matched with bright textiles. “I love beautiful materials, the handmade, simplicity of shape and line, and lots of joyful color combinations. I love pairing earth tones with saturated neons and bright color,” she explains of her home’s evolving interiors.

Since moving in, Winick has further rooted herself within the Hudson Valley community and discovered a few serendipitous connections. “The house was a rental property for decades and so many people I meet tell me they’ve lived here,” she says. Not only did a close friend’s father grow up in the home, the midwife who attended her second daughter’s birth also lived there. “She was so charmed by the idea of delivering a baby in her former bedroom,” Winick says. “The house has lots of special coincidences like this.” 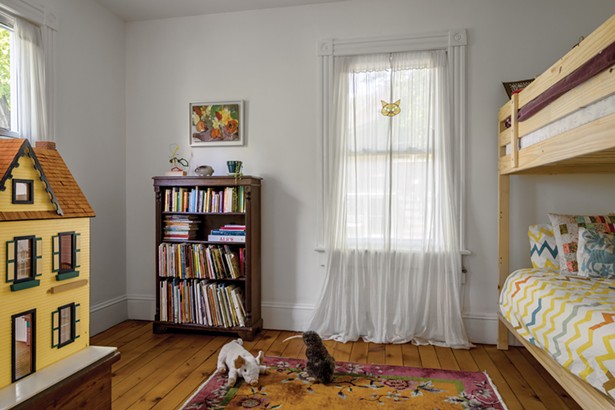