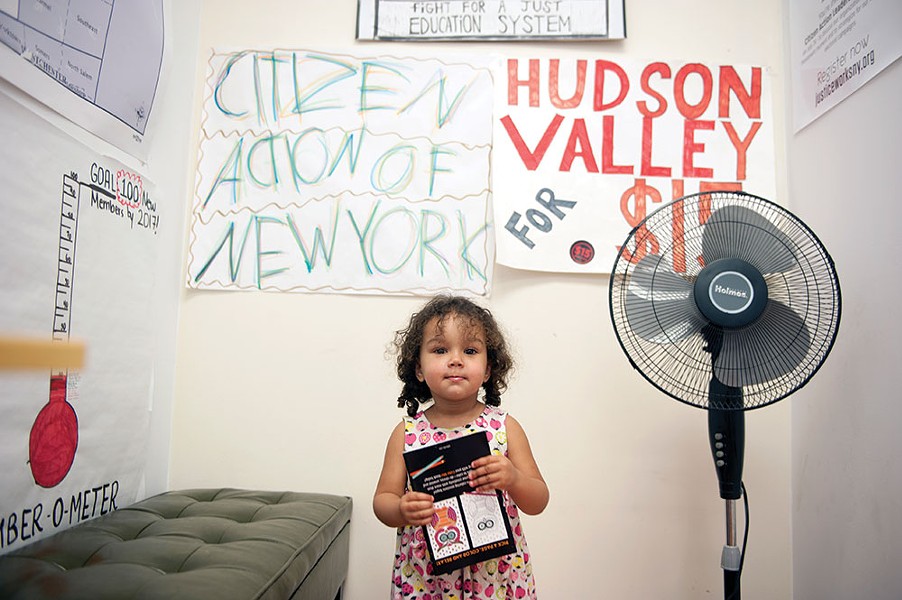 The impromptu group that gathered in Kingston on July 7th near the Citizen Action office was seeking a safe space to express solidarity in honoring Alton Sterling and Philando Castille, two men who had just died at the hands of law enforcement in Louisiana and Minnesota, respectively. People lit candles, sang, and held signs displaying the name, age, date of death, and activity of the people at the time they were killed. Alton Sterling, age 37, 7/5/16, selling CDs outside a supermarket. Tamir Rice, age 12, 11/22/14, playing with a toy gun in a park. At the bottom of each read #BlackLivesMatter.

The hashtag started on Facebook in 2013. After George Zimmerman was acquitted of killing 17-year-old Trayvon Martin in Florida, labor organizer Alicia Garza responded with a love letter to black people. She wrote, "I continue to be surprised at how little black lives matter." Her friend, Patrisse Cullors, a community organizer in Los Angeles, hashtagged it, and it went viral. Together with Brooklyn-based immigration-rights organizer Opal Tometi, Garza and Cullors built a website and took Black Lives Matter to the streets with local chapters and community activism. It's been hailed as a grassroots, digitally connected, next wave of the Civil Rights movement.

There were no set speakers at the vigil in Kingston, so attendees spoke in turn. One suggested they ask what police were doing to protect children of color. And before they knew it, the group was marching down Broadway to the police station. "The Kingston police responded well," says Callie Jayne of Citizen Action, a national membership organization with chapters and affiliates that organize around issues important to local communities. "They escorted us to the police station, one squad car in the front and one in the back." There, vigil participants rallied, sang, and read out all the names on their signs.

Afterward, Time Warner Cable News staff led the story with a reference to the shootings of police officers at a protest in Dallas. Then, "A similar, peaceful protest was held Thursday night, right in Kingston." According to Jayne, that's dog whistle reporting, and it negatively influences public perceptions of black people. "With Alton Sterling, media pulled up a 10-year-old mug shot rather than his Facebook profile pic," Jayne explains. "It portrays black as bad and white as good." Those perceptions are something she struggles with on a daily basis as the mother of two girls.

When Jayne was looking with her husband for an apartment in Accord last March, landlords were eager on the phone to show their rentals. But when Jayne showed up, the first question was, "What's your income?" That's exactly what a 2012 study by the US Department of Housing and Urban Development found. Across 28 cities, blacks were equally able to make appointments to view rental properties (a marked improvement from a similar 1977 study) but, upon arrival, were told about 11.4 percent and shown 4.2 percent fewer housing units than whites with comparable qualifications. Jayne identifies different levels of racism: "Individual and internalized is when someone feels this. Interpersonal is the guy at the office who makes the black joke. Institutional is people using their positions of power to express their individual and interpersonal feelings. It can be one person, but it builds its way up." A landlord's preconceived feelings about black people could affect Jayne's ability to provide a stable life for her children.

"Black folks feel pressure to win people over, in a certain way, in every interaction." —Margaret Kwateng

"Parents are trying to teach their children to be hyper-vigilant and hyper-aware all the time—the way you're standing, the way you approach somebody—with the knowledge and expectation that you're going to be seen as a threat," says Margaret Kwateng, of Nobody Leaves Mid-Hudson, a multi-issue community organization based in Poughkeepsie that connects people with problems rooted in systems of power, and co-founded the Hudson Valley Black Lives Matter Coalition. "Parents are often assumed to be incompetent, uncaring, or ineffective," Kwateng says. "This framing shifts the blame from economic systems that have destroyed all of their surroundings to the parents, who are struggling to put together the pieces." Those microagressions, Kwateng asserts, foster a negative self-image in children: of themselves and their parents.

With black students being suspended or expelled at a rate three times that of white students, parents must take time off from work to liaise with administrators to keep their children in school. "There's an overworked and underpaid population of black workers that have these added stressors in their family lives, which has negative health consequences," Kwateng explains. Studies find that exposure to pervasive discrimination can impact a family's well-being. Gilbert Gee of UCLA and colleagues found that people of color often have a higher rate of illness and lower mortality. In 2011, they wrote, "These systems—including the educational system, criminal justice system, and labor market—have been viewed as fundamental drivers of health inequities."