Nature Education for All in the Hudson Valley

Outdoor education reaches across the region

Everyone agrees there are benefits of spending time in nature. These benefits are physical, psychological, and social, among others. We know this intuitively and research has borne it out (much of it compiled on Richard Louv's website, Children and Nature Network). We often think of the environment as a resource for all of us, even part of our national identity. Historically, however, the out-of-doors has been off-limits to certain groups because of lack of funds, lack of access, lack of familiarity, or outright exclusion. Racism, sexism, homophobia, and ableism have even been a part of outdoor education, intentionally or not. That appears to be changing—all over the US and here in the beautiful Hudson Valley—and this is a change worth celebrating!

Nationally, groups like Outdoor Afro and Latino Outdoors are blazing the way toward a more inclusive environment. Both the North American Association for Environmental Education (NAAEE) and the New York State Outdoor Education Association (NYSOEA), the national and state professional organizations for educators, make diversity and inclusion pillars of their missions. And locally, outdoor and environmental educators are working hard to make our mountains, rivers, and fields more accessible and inclusive for all.

"For too long due to economics nature, time in it, a connection to it, has been a luxury," says Micah Blumenthal, Wild Earth Board President, community leader, and father of campers. "Being a luxury has therefore meant that it has been the realm, largely of white people. Because wealth dictates luxury. The Earth is all of ours. Caring for it is all of our responsibility. Connecting to it holds wisdom and power for all people equally. And the effects of abusing it disproportionately affects poor people. It is vital that nature education, sustainability programs, green jobs, climate science and the like be inclusive, and truly inclusive because its future leaders will need to come from all backgrounds to lead all of us to be better stewards of this planet. It is encouraging to see many groups here in the Hudson Valley starting to venture into this work mindfully. Which is hard to do. By asking questions. By having social justice trainings and seeking to do different." 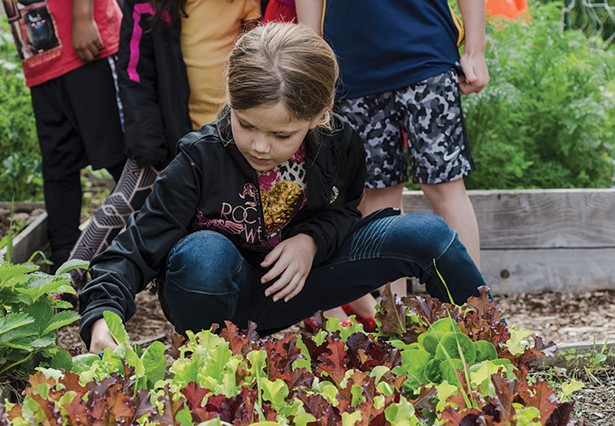 Some of our regional champions are well-established environmental conservation groups, like Mohonk Preserve and Clearwater. Some are farm and garden programs like the Farm Projects (in Kingston and Poughkeepsie) and Hudson Valley Seed. And some are wilderness awareness organizations, like Wild Earth. Whatever their approach to nature connection, all these groups see the value in hiring a diverse staff, giving their employees the right training, and actively tailoring their programs to serve normally underserved groups. They all recognize that there's a long way to go, but they are certainly moving in the right direction. Some fine examples follow.

The Mohonk Preserve was charitably carved out of the property of its namesake, the Mohonk Mountain House, in 1963. While a nature preserve surrounding an upscale resort might sound as if it's reserved for the elite, Mohonk Preserve has made strides to make its trails and carriage roads more accessible and inclusive. Mohonk Preserve is especially well-known for its NatureAccess program that helps people of all abilities access the trails, via specialized programming and all-terrain wheelchairs. Lesser known are the Preserve's programs with schools in Kingston, Poughkeepsie, and Newburgh, scholarship programs for campers; and the inclusivity directives that will be included in its upcoming strategic plan.

Take Me to the River

The sloop Clearwater, Pete Seeger's brainchild, is known for socially conscious environmental activism. A role model in hiring female leadership (including captains, crew, and educators), the Clearwater began a program over a decade ago called Young Women at the Helm—a youth leadership program for students in Hudson River cities. The program later expanded to include Young Men at the Helm and even LGBT leadership programs. These programs bring a sense of beauty and self-determination to young people who often don't get that message. And Clearwater has inspired others, including Rockin' the Boat in the Bronx (through which students build boats to race and do science on the water). "Clearwater strives to make the boat and our education programs a place for people of all races, ages, genders, and abilities to gather together in work and in song," says Maija Niemistö, Clearwater's Director of Education. "We recognize that this is a difficult task that still lies ahead of us and our nation." Learn more about Clearwater's youth empowerment programs.