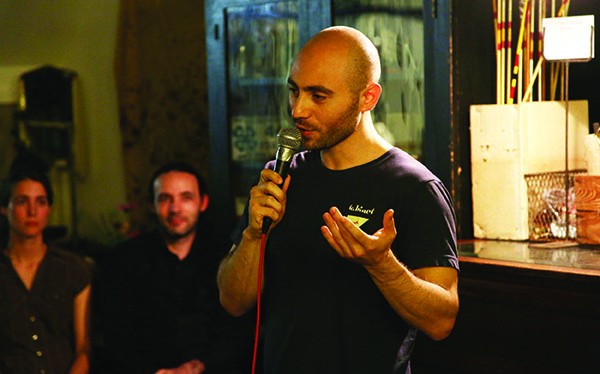 In the eight years I've been living in uptown Kingston (I moved here from Belgium in 2007), I've watched it grow from a place where I could make tumbleweed jokes to a thriving community where nobody gets my tumbleweed jokes anymore.

Kevin Paulsen, one of our elder statesmen of the arts and letters, recently told me he thinks there's too much pedestrian traffic on the streets now. That tells me there's just the right amount. It's true that there are lots of hipsters hanging out, all of whom are terrified to go off-script even for a second. But it's still fun to engage them in conversations and watch them squirm when you ask a deep and intimate question like, "So how's your day going?"

I can see that look flash across the person's face—"What's the right answer to that question?"

As for uptown Kingston, I've been watching the changes, tracking them one by one. Several factors have made the difference: the O+ Festival each October counts—for a brief glimmer, uptown feels like Portland (Maine or Oregon; have your pick). O+ is an annual swap meet of music and art for healthcare, with the resulting public benefit being about 40 concerts in one weekend, given by rockers with newly cleaned teeth.

BSP Lounge on Wall Street being taken over by a bunch of music management grads from SUNY Oneonta is another example of progress. BSP is the hottest little club in the area, bringing through a wide diversity of talent and serving many communities and constituencies. I used to leave a bucket of free earplugs on the merch counter featuring a Planet Waves sticker, so people would know how much I cared about their hearing. I still care—now I am planning to open a hearing aid shop next door.

Back in 2011 some red goat street art caused a huge fuss and felony prosecution, which served as a homeopathic remedy for the neighborhood. Even the New York Times stepped in and said it was the coolest thing going that week. Now everywhere you look, you see a red goat sandwich, sticker or tattoo. According to one dependable source on the topic (of homeopathy that is, commenting on a preparation made from goat's milk), "The he-goat [buck] is the epitome of masculine virility and creative energy, while the female [doe] typifies the feminine generative power and abundance."

This is why just about everyone panicked and a "Dragnet"-style investigation ensued when the cute little red icons appeared.

Amidst many other developments over the past few years, Outdated Café has emerged as an inadvertent community center. This is the freaky little place where everything but the espresso machine is for sale, where you can get antique office supplies or your choice of moose trophies or ancient laboratory bottles at bargain prices.

The place also hosts various writing workshops and other events during off-hours.

One Friday night in September, Outdated hosted a stand-up comedy night. There was a buzz gathering around the place, so after a walk around the block I took my dogs home, got a camera and came down to see what was up. I had only modest expectations. Comedy is one of the most challenging genres to work in; not everyone thinks that much is that funny. Not many people are so funny. But some are.

Since I was not on the guest list, I paid my five dollars and was in for a pleasant shock. The evening's presentations skated along the sexual tension of contemporary society with charming chutzpah.

Andrew Steiner began the evening with a series of confessions from his childhood. "I almost lost my virginity when I was 11 years old, to a cougar," he said. "It was my neighbor. She was also 11, but girls matured faster then."

Aside: a few months ago, I was doing some research into the astrology of the millennial generation. Everyone is desperate for information about these people, born from 1981 through 2001. According to the Strauss-Howe generational theory, this is the generation that will save the world.