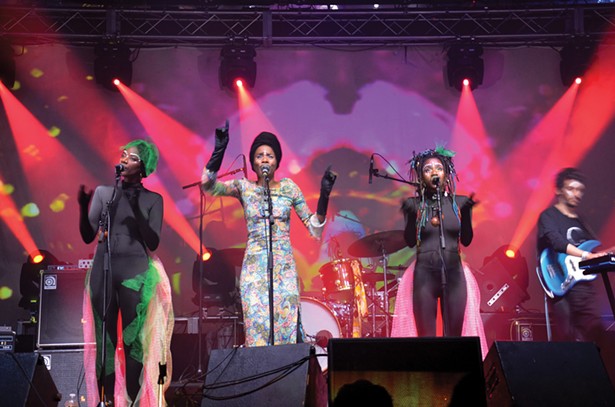 [Editor's Note: Since this piece was originally published July 1, the organizers of O+ Kingston informed us that they are planning to honor their 11th anniversary in October with a smaller, socially distanced celebration on Saturday, October 10, assuming it's safe to do so. Check their site and social media for updates.]

It’s a bittersweet win for the O+ Festival in Kingston. As with the majority of music festivals this year, the festival has been postponed due to the pandemic. Over Columbus Day weekend, the city would normally be buzzing with dozens of live performers, art, and pop-up health and wellness clinics. But if ever any music-dominated festival was poised to continue its core mission—addressing the disparity of health care among artists and the community as a whole—it’s O+, whose parent body’s overarching advocate work has been unrelenting and lies far beyond music itself.

“As an organization O+ is very nimble, so with what’s going on this year we’ve been able to temporarily transition away from the festival to doing year-round health and wellness work online,” says the group’s executive director, Holly Kelly. “Through Zoom, we’ve been hosting weekly meditation and stress-reduction sessions and HO+use Call, a weekly mental health-nourishment series to help people dealing with COVID-19.”

Cofounded by a handful of local artists and doctors, the first O+ Festival was held in Kingston in 2010. The full weekend of performances and art brought together local and visiting musicians and artists, who exchanged their work for health and wellness services from participating medical workers and healers. The celebration quickly became one of the Hudson Valley’s most popular annual events, drawing attendees and internationally famous headliners (Spiritualized, Lucius, Evan Dando). The original Kingston festival gave rise to O+ events in California, Chicago, Poughkeepsie, and North Adams, Massachusetts. In addition to its musical and health care elements, the gathering is also renowned for the colorful murals and other works it leaves in its wake. So it’s no surprise that O+ also earned the number two spot for Public Art in the 2020 Chronogrammies.

Even though the Kingston O+ Festival won’t be able to celebrate its 10th anniversary this fall with an in-person event, organizers remain excited about a scaled-down return of the festival for year 11. And in the lead up, they’ll continue concentrating on lifting spirits online.

“We’re looking forward to coming back to Kingston, where we started,” Kelly says. “And we’re grateful to be able to help empower the community in the meantime. That’s exactly what people need right now.”

To Your Health: 10th O+ Festival Biggest and Best Yet Sponsored