Music and Dance at the New Ashokan Center 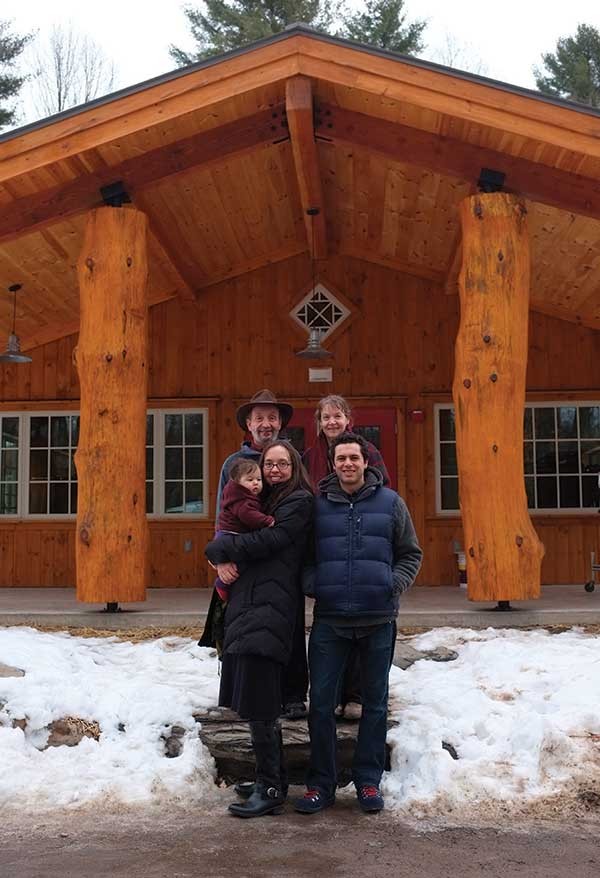 Jay Ungar's ringtone? Old-time fiddle music, naturally. One of the world's most renowned folk players, the Saugerties fiddler, along with his wife and musical partner, guitarist and bassist Molly Mason, is revered for "Ashokan Farewell," the beautifully haunting theme to Ken Burns's game-changing PBS miniseries "The Civil War." The song on his cell, however, is not the one he's best known for. Instead, it's a version of the folk standard "Rye Whiskey" by a Western swing band. But this afternoon Ungar's not taking calls. He and Mason are giving us a private tour of the Ashokan Center's stunning, newly built facilities in Olivebridge, about 10 minutes from Woodstock, where for nearly 35 years the couple has overseen the institution's famous Music and Dance camps.

"All four of these buildings were created to be as sustainable as possible, and the materials we used are almost entirely local," says Ungar as he opens the door to the large upstairs sleeping room of the center's bunkhouse. Lined with rustic, two-tiered beds, the space is centrally dominated by a towering reclaimed tree trunk. All is aglow with golden-warm wood whose freshly cut aroma is, quite simply, olfactory nirvana. "Nearly all of this wood and stone came from the land right here around us. The floors have radiant heating, and the buildings are built along a hillside, which gives us great natural insulation."

Ungar grew up in the Bronx and began playing when he was seven. After making field trips to the South to learn folk tunes from older players, he joined New York roots rockers Cat Mother and the All-Night Newsboys as a bass player. Although he left the group to attend college just before its 1969 Jimi Hendrix-produced debut was recorded, Ungar returned in time for the band's 1970 follow-up and next went on to play with folk-blues guitarist David Bromberg. Mason was raised in Washington and toured with swing trio the Mostly Sisters before moving to Minneapolis to become the house bassist of the embryonic "A Prairie Home Companion." She and Ungar stayed in touch after meeting at a gig at the Towne Crier in Pawling, and in 1981 she moved East to co-found Fiddle Fever with Ungar and join him at Ashokan, where he'd been teaching for a year. Since then, the two have co-led the celebrated Ashokan Music and Dance (formerly Fiddle and Dance) camps, whose immersive, thematic, multi-day programs for adults and families feature classes, jam sessions, guest performers, dances, workshops, song swaps, band clinics, indigenous food, outdoor events, and more. (Master fiddler Mark O'Connor is among the camps' esteemed alumni, and many other past participants have gone on to teach or become professional players.) In 1984 Fiddle Fever recorded "Ashokan Farewell," a waltz Ungar had written earlier in dedication to the beloved spot. Little did anyone know what the plaintive song would lead to.

Ken Burns heard the piece and was so moved by it that he contacted Ungar to use it in his 1985 documentary Huey Long. But the track would reach a much wider audience when the filmmaker used it once again, this time for 1990's "The Civil War." The rest, one might say, is history. "It's just incredible, what's happened from that song," says Ungar. "Because of it, people from as far away as Asia, the British Isles, all kinds of places, have sought out the Ashokan Center and come here to visit or enroll in the classes or camps—without knowing anything about the area beforehand."

Opened in 1967 by the State University of New York as the Ashokan Field Campus, the Ashokan Center is a pioneering outdoor environmental learning and conference complex that hosts young students from across the Northeast, who come for its distinctively experiential classes in natural and man-made history, science, crafts, and the arts. The 374-acre area is a lush, natural wonderland populated with geologic marvels like the 350 million-year-old Cathedral Gorge and with a history traceable to Ice Age wildlife, Native Americans, Dutch homesteaders, and Revolutionary War activity. Its numerous antique structures include an 1885 covered bridge and 18th- and 19th-century buildings and working craft shops, where visiting students learn first-hand about such age-old arts as printing, broom making, and pewter and tin working. Since its inception Ashokan's core curriculum has expanded to include "place-based" educational programs in community building, social and emotional learning (also called SEL), language arts, and hands-on living history and field-science research. The center also regularly hosts retreats sponsored by outside groups whose activities dovetail with its prevailing back-to-the-land themes; one steady client is the Northeast Blacksmith Association, which meets there twice yearly, taking advantage of Ashokan's fully operational blacksmith shop.