The flames of love, war, and sexual taboo are fanned throughout Shakespeare's greatest plays, captured in stories that are remarkably relatable to this day. His themes echo through history: Families torn apart by forbidden romance, combat-weary soldiers who embark on battles of the heart, the so-called purity of a woman held in higher regard than her mind or manner. The centuries-old works of this prodigious playwright transcend his era in such a way that his art imitates life-to-come.

Proving the timelessness of Shakespeare's comedy "Much Ado About Nothing," director May Adrales reinterpreted the story by changing its setting from 1590s Italy to 1950s America; her vision can be seen during this summer's Hudson Valley Shakespeare Festival at Boscobel.

"May was inspired by the time period of the TV show 'The Marvelous Mrs. Maisel,'" explains Davis McCallum, the festival's artistic director. "She felt that setting the play in a world where there were defined gender roles would be useful for this particular story." 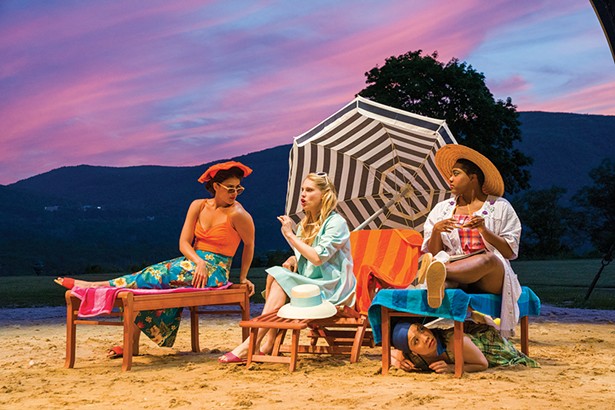 "Much Ado" tells entwined tales of love and near-tragic betrayal, with the Great Bard's notorious witty banter and comic repartee peppered throughout. The plot unfolds with Benedick and Claudio, two soldiers returning from war. They fall for cousins Beatrice and Hero, whom they attempt to woo during a masked ball, where instead of swans and jokers, party guests don masks of renowned figures of that period, like Jackie Robinson. While Benedick and Beatrice exchange insults and verbal jabs as defense mechanisms to defy their mutual attraction over time, Claudio and Hero lean into their affections and are soon set to marry.

Whether through jealousy or a lack of love, Hero's uncle Don John, sabotages the union by putting Hero's integrity (and hymen) in question, leading Claudio to call off the wedding. What ensues is a scheme to uncover the truth that dramatically snowballs with classic Shakespearean flair—faked death, vengeful plotting, near heartbreak, and a happy ending. As the truth is revealed, Hero is finally unveiled as alive and, ahem, intact.

Related Summer Drama: Get Your Theater Fix at these 6 Upstate Spots

Summer Drama: Get Your Theater Fix at these 6 Upstate Spots
A list of four venues brining you a summer of theater fun.
By Peter Aaron
Summer Arts Preview

"We approach performances in a playful, contemporary way; rarely would you see actors in pumpkin pants," McCallum says of HVSF's programming. Instead, costuming and music for this play are both indicative of the '50s. "Though the language is still Shakespearean, we approached singer-songwriter Nellie McKay to write music to his lyrics. She created these cool, retro songs that sound like what you'd hear in a Doris Day movie."

The show takes place under the Theater Tent, a 500-seat outdoor space overlooking the Hudson River. McCallum suggests packing a picnic and enjoying the scenic views before the show. "You know movies described as romantic comedies—that genre in which two strong, independent characters take the entire film to realize they love each other? 'Much Ado' is the original romantic comedy," he explains. "It's a great way to remember how wonderful it is to fall in love."

"Much Ado About Nothing" is performed every third night of the festival through September 8 at Boscobel in Garrison. Additional performances during the festival include "Cymbaline," "Cyrano," "Into the Woods," and "Julius Cesar." Hvshakespeare.org.

Theater Shakespeare Boscobel Much Ado About Nothing