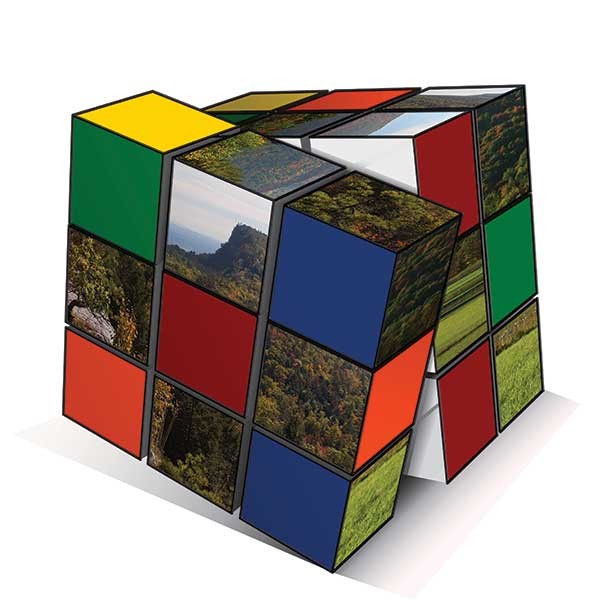 A longer version of this article appears on Eric Francis's website.

Nearly everyone in the Hudson Valley is familiar with the land preservation efforts of Mohonk Preserve. The name is synonymous with forests, trails, and rock climbing. The Preserve has the reputation of being an excellent steward of its land holdings, estimated at 8,000 acres. When lawsuits involving Mohonk Preserve occasionally make the news, their standard response is that the Preserve, a New Paltz-based nonprofit, tax-exempt 501(c)3 corporation, buys only from willing sellers and rarely engages in litigation.

In that light, it's noteworthy that in late May, State Supreme Court Judge Christopher E. Cahill issued a decision in a nine-year lawsuit that involved Mohonk claiming title to 75 acres of land that the court held actually belonged to its neighbors, Karen Pardini and Michael Fink. The land is located along Clove Valley Road in the Town of Rochester.

More noteworthy is that Mohonk and its agents have sued Pardini and Fink four times, trying to take their land, keeping them tied up in nearly nonstop litigation and appeals for 19 years. In all that time Mohonk has never once won a case; one of the smaller ones was settled. Yet as of July, Mohonk was fundraising to prosecute the most recent case further.

Located directly in Mohonk's viewshed and developable as a commercial property, Pardini and Fink's land is surrounded by the Preserve, which has contested nearly every boundary the two neighbors share.

Mohonk, OSI, and other organizations work closely together to acquire property along the ridge, for which they raise funds from the public. The Preserve started as the Mohonk Trust in 1963, when the Mohonk Mountain House, a for-profit resort hotel, put the majority of its land into a conservancy, thereby taking it off of the property tax rolls.

The King's Lane Lot
Land in this area of the county is divided into Lots 1-19, part of a land grant from 1770 called the Nineteen Partners Tract, which was subdivided into 19 sections or lots in 1799. In 1841, the property boundary of a farm (called the Curran Farm) was drawn following a ridgeline laterally through Lots 1 to 5 and has not changed since.

The transaction was arranged by Robert K. Anderberg, general counsel to both the Open Space Institute and the Shawangunk Conservancy. Anderberg served on Mohonk's board of directors from 1981 to 1988.

Anderberg's plan to acquire the 75 acres on Mohonk's behalf dates back to a March 24, 1993 memo from Anderberg to Norman Van Valkenburgh, Mohonk's longtime in-house surveyor, and Glenn Hoagland, Mohonk's executive director. In that memo, Anderberg writes, "One of the landowners on Rock Hill, a Gloria Finger, is interested in selling a portion of her acreage to the Mohonk Preserve."

A survey map was prepared and certified by Van Valkenburgh, the longtime in-house surveyor for Mohonk, which claims that the 75 acres of Lot 1 at the west end of Fink and Pardini's land belongs to Mohonk. Mohonk filed the map with the county and used it to get Planning Board approval for a subdivision from the Town of Rochester in 1994. The same map was used to secure title insurance from First American Financial. Title insurance is a form of coverage that protects the buyer in case it turns out the purchased land was not actually owned by the seller.

The Preserve then brought a lawsuit in State Supreme Court against the actual owners of the property, Pardini and Fink, attempting to get the courts to affirm what they claimed was "record title." The litigation was paid for by First American, which now must either sponsor an appeal or reimburse Mohonk for its cost of purchase.

While it may seem that Finger tried to trick Mohonk into buying land that she didn't really own, it was Anderberg—an attorney—who arranged the transaction on Finger's and Mohonk's behalf. It's not the first time he's tried to buy land from someone who didn't own it; the same court found that he did the same thing in a 1997 case involving the Shawangunk Conservancy.

In trying to prove that a smaller 26-acre piece of land was a neighboring 75-acre tract, Mohonk presented conflicting theories that in effect rearranged the ownership history along that section of the Shawangunk Ridge.

Over nine years of litigation, the court heard from 30 witnesses, reviewed 100 exhibits, and read 1,299 pages of trial testimony. After all of this, Judge Cahill ruled on May 29 that Mohonk Preserve had no claim to the 75 acres in question. The court rejected every single claim made by Mohonk and its attorney, John Connor of Hudson. It accepted every fact and argument presented by Pardini and Fink and their attorney, Sharon Graff of Kingston, calling theirs the "more coherent" of the two descriptions of history.

Smitty's Bar and Dude Ranch
Many old-timers in the Hudson Valley remember Smitty's Bar and Dude Ranch on Clove Valley Road. It was owned by Wilbur Smith, known to everyone as Smitty. For more than a generation, Smitty's was the place to hang out by the stream, ride horses, camp, and go hiking. Regulars and staff stayed in a little hotel above the bar. Smitty patrolled his land on horseback wearing a revolver on his hip.

The place was a mecca for countless hippies and nature lovers from the 1960s until Smitty sold the property to Pardini and Fink in 1987. The couple closed the business and made a project of cleaning up the land from decades of overuse, removing 74 dumpsters of garbage and debris the first few years.

Part of the irony of this case is that the location of Smitty's and the lay of the land there are so deeply ingrained in local folklore.

Smith had been hounded by Mohonk with threats and legal actions during the 1970s and 1980s. Too poor to defend himself and unable to read survey maps, he sold the bar and the surrounding lands to Pardini and Fink.

The couple was first sued by the Shawangunk Conservancy, which serves as a land acquisition agent of Mohonk, in 1994. That suit unsuccessfully attempted to take 136 acres from them. State Supreme Court Judge Vincent Bradley said in his 1997 ruling that Pardini and Fink had standing to bring a fraud action against the Conservancy.

When I interviewed Van Valkenburgh about that lawsuit in 1997 as a reporter for the Woodstock Times, he told me that he was after "the whole farm, whatever they [Pardini and Fink] own."

He really meant it. For example, Pardini and Fink's property includes about 200 acres on the north side of Clove Valley Road. In various lawsuits (including the most recent one), Mohonk or its agents have claimed every acre except for Smitty's former house.

Fink said in July that he and Pardini have spent more fighting lawsuits by Mohonk and its agents than they paid for the whole ranch. One can only imagine Mohonk's legal bills.

The Case of the Moving Mountain
As is in true many places, rural land along the Shawangunk Ridge is often described by the neighboring properties. These are called adjoiners. Once something is described by its relationship to adjacent lands in all directions, you know where it is.

No two parcels of land have all of the same adjoiners; each is unique. This is why adjoiner descriptions are so dependable. Your land describes that of your neighbors; their land describes yours.

Change any one adjoiner description and you have to rearrange the descriptions of every property in the area, since they all depend on one another. It's a little like turning a Rubik's Cube. When you turn any one section, you simultaneously rearrange the patterns on four sides of the cube and shift the orientation of the other two.

At the trial, Pardini and Fink pointed out that Mohonk failed to explain why its claim to the 75 acres was missing many necessary adjoiners and that it listed others not called for by the deed record. One example involves land formerly owned by John I. Davis in the 19th century, now called the Davis parcel. The real King's Lane Lot—the 26-acre one owned by Finger—calls for Davis as its eastern adjoiner.

In Van Valkenburgh's survey of the 75 acres that was used to make the purchase and secure title insurance, Van Valkenburgh accurately lists Pardini and Fink as the eastern adjoiner.

Then in court, Mohonk tried to claim that the John I. Davis parcel was the eastern adjoiner to the 75 acres, in effect attempting to kick Fink and Pardini off of even more of their land. Davis is nowhere to be found in Pardini and Fink's chain of title, for a good reason. The Davis parcel is located east of the real Kings Lane Lot, not the 75 acres that Mohonk was pretending was the King's Lane Lot.

That Van Valkenburgh originally listed Pardini and Fink as the eastern adjoiner to the 75 acres in the survey used for the purchase and title coverage proves he knew Davis was not located there and that he knew who the real owners of the 75 acres were. Doing a survey involves researching the ownership history of each adjoiner. But he had another reason to know the real history: He had been surveyor and expert witness in every prior lawsuit against Pardini and Fink.

At trial, Mohonk failed to present a witness who had actually done a survey of the property it was claiming. Notably, Van Valkenburgh was not called as a witness by Mohonk to tell the story of his survey, which is the usual practice. But he sat in court every day of the trial and assisted Mohonk. Had he been called as a witness, Pardini and Fink's lawyers would have asked him to explain how the Davis parcel got up and walked down the mountain.

Presented with these and other facts, Judge Cahill concluded that Finger never owned the land Mohonk had "purchased" from her, and ruled that Pardini and Fink hold both proper title and common law possession of their land.

In late July, I went to Mohonk Preserve to interview its top leaders—Glenn Hoagland, the executive director, Ronald Knapp, the board president, and Gretchen Reed, the director of marketing and communications. They spent an hour and 20 minutes attempting to convince me that Michael Fink was trying to take their land from them. They also claimed that Pardini and Fink didn't believe they owned the 75 acres that the judge determined were part of the couple's own property.

None of the Preserve's officials would answer any of my questions about why the adjoiners to the land they were claiming did not match known reality on the ground, saying they didn't remember the details and didn't want to "re-litigate" the case in their conference room.

Mohonk recently said that its board of trustees had voted to appeal Cahill's ruling. In a July 5 letter to the Preserve's members and supporters, Hoagland and Knapp claimed that Mohonk still owns the 75 acres. They trivialized Judge Cahill's decision as being just three pages long when in fact it's 90 pages.

Hoagland and Knapp wrote, "The continuing litigation...underscores the importance of the Preserve's critical land protection work, which deals not only with acquisition of land and conservation easements but with the perpetual protection of lands in our care. With your continued support, we will remain steadfast in our 50-year heritage of saving the land for life."