Theatergoers have the opportunity to learn about the man behind the pandemic, and how the film about him was made 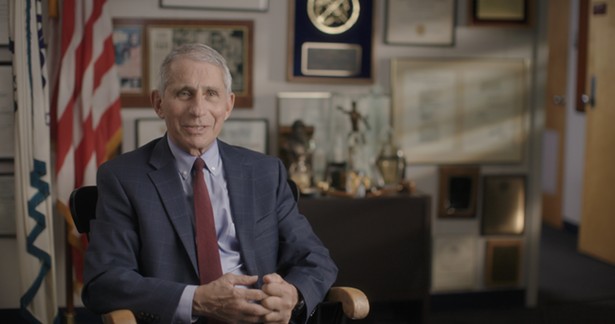 Last year, amid a 100-year plague, Dr. Anthony Fauci became a household name. The director of the National Institute of Allergy and Infectious Diseases and the chief medical advisor to the president, Fauci gained unprecedented celebrity for his position as he appeared on talk shows and radio hours, giving press briefings, and daring to dissent from Trump publicly. The new biopic Fauci follows the now-iconic physician through one of the most difficult years of his career.


As part of their slate of late summer screenings, the Moviehouse in Millerton will show the film on September 15 followed by a meet-and-greet with Millerton resident John Hoffman, one of the film’s directors and producers.


The film’s compelling portrayal of Fauci adds nuance, dimension, and humility to an abstracted public persona, according to Moviehouse owner Chelsea Altman, who, with her husband David Maltby, took over the historic cinema earlier this year. “You see him as a human,” Altman says. “He’s been politicized, but he’s really a public servant. I do think this movie gets to the heart of that.”


The film covers Fauci’s early career, chronicling how he rose from being a resident at the New York Hospital-Cornell Medical Center to his current position during the start of the HIV/AIDS pandemic. Comparing his response to that epidemic with the coronavirus pandemic, viewers see the stress, exhaustion, and even danger that comes with being a public servant. With commentary from Peter Stanley and other HIV/AIDS activists, former president George W. Bush, and Bono, Fauci becomes a multi-faceted doctor who revolutionized the way the country tackled public health crises. Home movies and commentary from former patients, friends, his wife Dr. Christine Grady, and eldest daughter Jenny Fauci paint a picture of a Fauci outside of the White House.


Hoffman and Janet Tobias, the film’s other director and producer, have worked on other health-related films in the past. Tobias has produced 11 pieces for PBS NewsHour as well as a documentary for the BBC and CNN, Race for the Vaccine. She’s won an Emmy, Peabody, and other awards.


Hoffman is also a six-time Emmy winner. Through his nonprofit AIDSFILMS, he made AIDS: Changing the Rules, the first nationally broadcast HIV-prevention film, in 1987. Since then, Hoffman has worked on six films with the National Institutes of Health. Altman hopes that attendees gain more insight into the filmmaking process from speaking with Hoffman. “I think it’s interesting to see how the filmmaker’s opinion changes from beginning to end with a documentary,” she said.

Beginning at 6pm, attendees can meet Hoffman in the venue’s Screening Lounge Bar, where the bar menu will be available. Hoffman will give an introductory talk at 6:30pm, followed by a screening of the film and then a Q&A. Masks and proof of COVID-19 vaccination or a negative COVID test are required.


Altman hopes that the film will widen viewers’ perspective on the pandemic and the science behind fighting it. “I would like them to see the human side of science and how it’s connected,” she says.


The Moviehouse has several other upcoming events, including on September 17 a screening of The Eyes of Tammy Faye, a biopic about one of the country’s most illustrious religious broadcasters, as well as Blue Bayou, which follows a man forced to confront his past as he is threatened by deportation. Opera lovers can purchase season passes or standalone tickets to the Metropolitan Opera’s 2021-22 season. Ten productions, including Eurydice and Cinderella, will be live streamed from Lincoln Center between October 9 and June 4, 2022.


Tickets for the screening of Fauci are available for purchase online or through the box office by calling (518) 789-0022.

The Millerton Inn: Farm-to-Table with a Greek Flare