Movements in the Mountains

A Soundtrack Composer in Bearsville 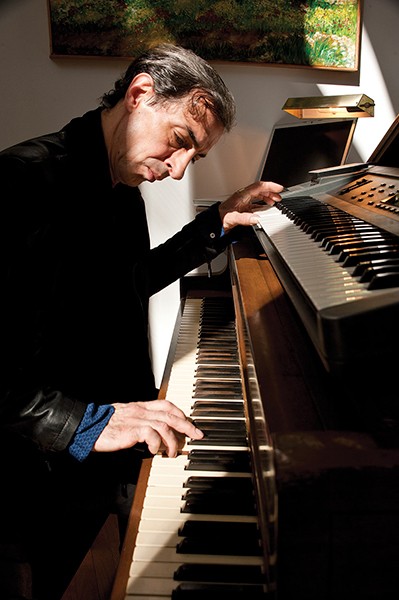 Even from the outside it's clear that music fills the Bearsville home of Tasso Zapanti and his wife, Jeannine. Approaching via the garden path that links the home's back door to its tree-lined driveway brings to the ears an ominous series of low, continuous, humming sounds emitting from the two-story abode. Once inside, you're face to face with a regal 1930s Hardman Peck baby grand piano. Peak beneath the open top of that stately, polished instrument, toward the far end of the airy living room, and you spy its owner on the sofa with one of his electric guitars. "I don't really play the guitar," he says while thrumming the low stings to stoke the bundle of parallel drones piping from his speaker system. "But sometimes I just like to play with the sounds."

There's a bit of an accent there. Zapanti, who creates music for films and TV, is originally from Greece. He came to the US with his family, settling in the heavily Greek neighborhood of Astoria, Queens, when he was 11. The accent is, one might say, the siren song that drew Jeannine to him. "She liked foreign guys—and guys with long hair, which I had back then," explains Zapanti, whose swarthy mane is shorter and streaked with gray these days but remarkably robust for his 52 years. And although his salt-and-pepper coif would have been out of place in the rock bands of his youth, it fits him fine as an older, wiser composer, one whose boyish sense of enthusiasm and wonder about his craft are as unwavering as they've always been. "Composing in this room always puts me in a very inspired, creative state—look at those trees," he says, pointing excitedly to the tall grove that lords over the generous front yard of the two-acre Wittenberg Road property. "They're like a brass section, like trumpets. Jeannine and I call that leaning one over there [a lone, tilted tree separate from the central cluster], 'the Dancer' because he looks like he's off somewhere else, moving in his own way." Dance has been another source of inspiration for Zapanti's music, as well as an interest he shares with his wife; Jeannine, who works as a psychotherapist, has a background in dance. "Stravinsky is one of my biggest influences, and he wrote for ballet," says Zapanti, gesturing toward a sculpture perched on a sideboard. Made from a piece of driftwood the couple found on a beach in the Turks and Caicos Islands, its limbs are spread outward with a graceful span. "We were drawn to it because it reminded us of a dancer," says the pianist and songwriter. "I guess I got into writing for soundtracks because I think of music visually."

An amble around the couple's clean-lined, 1960s-modern house offers more visual cues, some which have sonic properties as well. Mounted on a wall by the front door is the trumpet Zapanti took lessons on as a child (he doesn't play horn anymore), a harmonium on loan from a friend rests on a nearby table, and on a corner of the piano sits a Marxophone, a curious, antique keyed instrument similar to a fretless zither. High on another wall hangs a tuba resurfaced with gold spray paint. "I studied music theory and composition at City College of New York, where the music department had several piano practice rooms that you reserved by the hour," Zapanti recalls. "For some strange reason, they kept on giving me the same practice room every time I requested one. It had this neglected, old tuba that was pretty rusty. I looked at that tuba for four semesters straight and I got attached to it. So when I graduated, it graduated with me. Every time I start a new composition, I just stare at it for a while and it really helps me focus and gets me in a creative path." 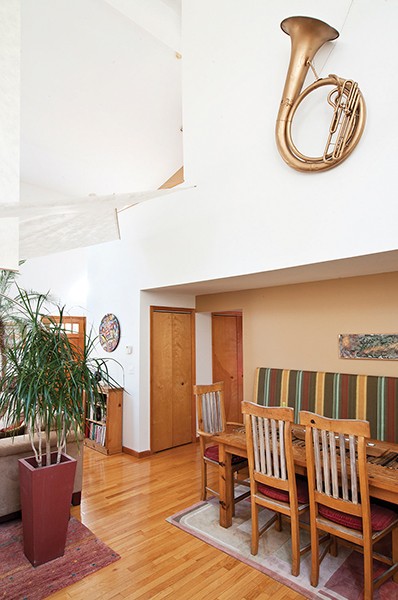 In a larger sense, Zapanti's creative path essentially began in junior high school, where he played in the school orchestra before moving on to New Wave bands in high school. "I discovered playing music around the same time I discovered girls," he says, adding, with a laugh, "No surprise, right?" By the time he'd enrolled at City College, however, his goals were loftier than playing keyboards and meeting chicks. "I started to want more complexity [in the music] and this was when I really began listening more to Stravinsky, Schoenberg, and other composers." Also increasingly on his radar were soundtrack luminaries like Ennio Morricone, Mark Isham, and Zapanti's fellow Greek, Vangelis, who is best known for the theme to the 1981 epic Chariots of Fire. "From Vangelis, I learned that I didn't have to go crazy learning to write on paper in order to create music," he explains. "I could use electronics to make textures and still get a nice, calm classical sound." One of his classmates was aspiring director Joseph B. Vasquez, who enlisted him to write and record the music for the 1991 comedy Hangin' with the Homeboys (starring future Rosendale resident John Leguizamo) and the gang drama The Bronx War. Zapanti's more recent film projects include the 2002 superhero flick Black Cougar and 2004's Proud, which stars Ossie Davis and tells the true but forgotten story of an African-American naval crew in World War II. (The soundtracks to the latter three films have been compiled for Cinematic Plateau, released this year on Zapanti's Music of Az label.)