Mountain Biking: A Non-Medicated Approach to Helping Kids with ADHD 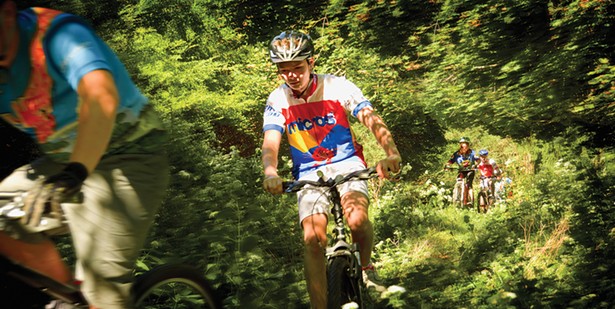 Rounded as a Buddha's belly and crisscrossed with rugged trails, Storm King Mountain looms over the west bank of the Hudson River like a gatekeeper to highlands beauty. It's a spot for dreamers and poets, hikers and adventurers—and now it is also the birthplace of a uniquely therapeutic summer mountain biking program.

Focused Riding, a two-week program geared toward middle and high schoolers who have an attention deficit disorder or learning disability, is the brainchild of David Mendlewski, director of the academic support program at Storm King School (SKS), an international boarding and day school nestled in the mountain's foothills. Mendlewski, who also coaches a mountain biking team at SKS, had a lightbulb moment two years ago while driving home from a training with the National Interscholastic Cycling Association (NICA). At the training, he had run into a colleague from another part of the state who enthused about how mountain biking was benefiting his 14-year-old son, who had been diagnosed with attention deficit hyperactivity disorder (ADHD).

"He told me how mountain biking had helped his son focus in school and improved his organizational and time management skills—a really big step for him," says Mendlewski. "The idea came to me that I could combine my 20-plus years of working with kids with attention deficit disorders and learning disabilities with my lifelong passion for mountain biking to create a program that could help kids improve their focus in school and prepare for the upcoming school year."

Focused Riding had its first season last summer. Along with rides every day throughout the valley—from Stewart State Forest and Black Rock to Minnewaska State Park and Wyndham Mountain—the group of five kids also took time for yoga and mindfulness techniques, writing and reflection time, and academic and organizational skill-building, including reading under the guidance of an English teacher. The combination of physical and mental stimulation unlocked capabilities in the kids: They became more focused and better able to tackle the challenges in front of them. They also became skilled mountain bikers and had a lot of fun. "The intervention we provide, the mountain biking, seems to have a calming effect," says Mendlewski. "The mind develops clarity as a result of the vigorous exercise, and the kids are not as intense or distracted as they were before. I also see an improvement in their personal engagement and interaction with each other. I'm very encouraged by the results so far."

A Trail to a Brighter Future

Mountain biking might seem like an unusual therapy for attention deficit disorder, especially when it is so easy in our culture to pop pills like Adderall and Ritalin to control its symptoms. Yet it is perhaps because these pills are so ubiquitous—Adderall has black-market popularity as a productivity-booster on college campuses, and can be addictive—that we also need natural, fresh-air alternatives.

About 6.4 million American schoolchildren have a diagnosis of ADHD/ADD, and its symptoms can include difficulty focusing and staying on task, absent-mindedness, irritability, mood swings, impulsivity, lack of restraint, and sometimes aggression. While exercise might not entirely replace pharmaceuticals for everyone, there is a growing body of research to support its effectiveness in relieving the effects of attention deficit disorders, which can impact a person's quality of life, relationships, and ability to succeed in school and beyond.

A 2018 review of 15 different studies found that exercise led to improvements in the attention and social behavior of children with ADHD/ADD, among a slew of other benefits. Experts like John Ratley, author of the book Spark: The Revolutionary New Science of Exercise and the Brain (Little, Brown and Company, 2008), have been touting the advantages of exercise for ADHD/ADD for decades, and healthcare providers are increasingly recommending physical activity of all kinds to help manage attention deficit disorders.

Though many forms of exercise can calm the nervous system and help focus attention, biking might be particularly effective. An organization called the Specialized Foundation—which uses cycling to help kids achieve academic, health, and social success—sponsored a study in which 47 students, aged 11 to 14, rode bicycles outside for 30 minutes before school over a one-month period. The results showed positively altered brain activity in the kids, increased attention span, and boosted moods. Inspired after he read a 2010 article in Bicycling magazine called "Riding Is My Ritalin," Specialized Foundation CEO Mike Sinyard—who has ADD himself, as does his son—now helps bring cycling programs to schools nationwide through the nonprofit's grant-based Riding for Focus program.

While Specialized uses road cycling, Mendlewski sees unique advantages in adding mountainous terrain to the equation. "When kids are mountain biking, they need to use a lot of focus and attention because there's a lot going on," he says. "If they're riding on a trail at a moderate pace and all of a sudden there's a turn ahead, they're going to need to put all of that together in their mind and prepare for that turn. I teach kids that when you're mountain biking you're focusing on the horizon in front of you. You need to see everything because you need to know what's coming up next."

Letting the Best of the Kid Shine Through

ADHD and ADD are often difficult diagnoses to make, and parents may realize that something is up with their child for years before arriving at a clinical definition. "I'm conservative about [making a diagnosis like this], because psychological problems with kids are often expressed in overlapping ways," says Sandra Regis, a psychologist who, with her husband Mark Guido, has a private practice in Goshen and also works with kids at the Storm King School. "Hyperactive behaviors that appear to be ADHD might really be an expression of anxiety or other emotional issues. You can also have ADHD overlapping with a conduct disorder or learning disorder." That's why it's important to get a thorough evaluation, Regis advises—whether it's through a private psychiatrist or a school psychologist who, unbeknownst to the child, can visit the classroom to observe him or her in action and also meet with the child individually, using a rating scale to determine a diagnosis.

Yet it is tricky terrain to medicalize a kid's personality type, putting a clinical label on something as intangible as a child's spirit. "Any provider in mental health services has to have that sitting on his or her shoulder," says Regis. "How much of something is a disorder, and how much is just an expression of who they are?" Of course, a diagnosis is useful—even, some might argue, essential—if certain behaviors prevent a child from realizing their full potential and succeeding in school and in life. Some children will have social problems because a hallmark of ADHD is impulsivity, and social problems can lead to low self-esteem. A diagnosis can open up a world of options for treatment and support; often, a pharmaceutical solution is part of the equation.

Take the case of one 16-year-old boy, Alex Gold from Red Hook. Gold (not his real name) started Adderall about three months ago after his parents suspected for years that ADD might be an issue that was holding him back. "He was always a little rambunctious," says his father, "a little bit mischievous, not paying attention and sometimes disrupting class. He's smart, so he picks things up quickly, but as he grew older we found that he had difficulty retaining interest in any particular thing. He might be athletically gifted, good in one particular sport, but he'd lose interest and move on to the next thing."

Over the years, Gold's doctors brushed aside his parents' concerns and said he was fine. Yet when things worsened, the boy wasn't focusing on academics, his attitude soured, and he was rude and disrespectful a lot of the time. "That was not the kind of a person we believed he really was," says his dad. "So we took him for testing, and now the doctors say they could have missed something; there is probably some ADD here after all." Once Gold started on Adderall, the change was dramatic. "His focus has increased, he does better in school, and the attitude and rudeness have largely gone away. It's allowing the best of the kid to come through."

Road Map for a Challenging Course

Putting a kid on medication isn't easy for parents, who often worry about the child's developing brain or their chances of instigating a substance abuse problem. "I don't know if there is any clear evidence that this is true, but pharmaceuticals permeate our culture and it's a legitimate concern," says Regis. Gold's parents are looking into switching him from Adderall to a newer drug called Vyvanse, which is metabolized in the stomach and not as habit-forming. Side effects are a concern as well; Adderall can in some cases cause stomach pain, loss of appetite, weight loss, a faster heart rate, and sleep problems. And some people complain that ADHD/ADD drugs have the effect of flattening or muting their personality, particularly with long-term use.

Regis notes that while medications can be very helpful (though she cannot prescribe them herself, because she is not an MD), she likes to try alternatives such as mindfulness meditation, counseling, and cognitive behavioral therapy (CBT). "With CBT, we're talking about reprogramming the brain," she explains. "For example, an ADHD kid who has gotten in trouble for blurting out something in class can feel very bad about it afterwards. I'll ask the student, what are you saying in your head? They might say, 'I'm a loser,' 'I get in trouble all the time,' 'My life sucks.' Then we'll go back over the situation. I try to help them find their own words and think about it differently: 'It was just a mistake,' 'I'm only human,' or 'Next time I'll try this instead.' There are things we can do to help them with their struggles."

Interventions like the Storm King School's mountain biking program can also be part of the toolkit. This year, the program will interweave the vigorous cycling sessions with a few more academic strategies, such as how to do research and orchestrate writing a paper. In a typical school setting, a teacher might give kids two weeks to write a paper, but a kid with ADHD or ADD will not know how to manage their time or might forget about the assignment altogether. "The teacher will come back and say, 'OK, don't forget that your papers are due tomorrow,' and this kid will be like, 'What paper?'—because there was no plan in place for them to follow through," says Mendlewski. "We teach them how to use a plan and what that plan should include."

It all goes back to keeping your eyes on the horizon, critical for any mountain biker looking to tackle the road ahead. "One of the things I stress with my students is, yes, this stuff works, but you have to put the effort and energy into it," says Mendlewski. "I can teach all the strategies in the world, but they're not going to do anything for you unless you truly engage with them and use them to your advantage." With grit and determination, the trail's hard-won rewards are that much sweeter.

The Power of Peer-Assisted Recovery