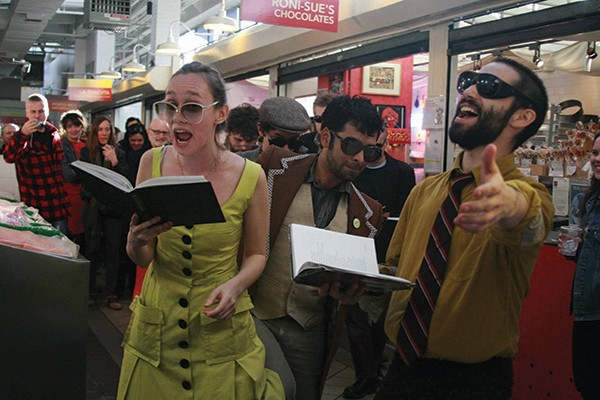 A new type of art is struggling to be born, out of a confluence of dance, poetry, theater, minimalist music, and new media. There is no word for it yet, so critics must make do with "performance." The way rap music is based on samples of previous songs, this new form often begins with quotation. It may strike one as "meta-art," art that moves beyond the expected, sometimes into the realm of science. Now that movies are no longer made for adults, this new art form is summoned to tell stories. To find this form in its native habitat, visit Mount Tremper Arts.

Suzanne Bocanegra's "When a Priest Marries a Witch: An Artist Talk," on July 20, takes the traditional artist lecture, featuring a slide show, as a starting point. Well-known actor Paul Lazar (The Silence of the Lambs) impersonates Bocanegra, telling her life story, beginning in Pasadena, Texas, and ultimately including Elvis, abstract expressionism, the Pope, astronauts, a witch, and the Singing Nun.

On August 3, Souleymane "Solo" Badolo, a choreographer and dancer from Burkina Faso, will perform "Buudou, BADOO, BADOLO," based on his studies of his family's genealogy, beginning with his great-great-grandfather, whose surname was Badoo—culminating in lessons to pass on to his own son. A second work in progress features bodies clothed in grass, leaves, and clay. Badolo's movement has elements of ritual, folk dance, and gymnastics, conveying interior struggle. Badolo teaches contemporary dance at Bennington College.

Varispeed, a collective of composer-performers, will perform "Perfect Lives," an opera by Robert Ashley, for free on August 17. Ashley composed the work beginning in 1978, in collaboration with "Blue" Gene Tyranny. "Perfect Lives" is set in a Midwestern town, in seven half-hour segments, which Varispeed will stage in such real-world locations as the Woodstock Town Green, the Phoenicia United Methodist Church, and the Boiceville Supermarket. The collective debuted "Perfect Lives" in Manhattan in 2011, but this is their first performance of the opera outside New York City.

Mount Tremper Arts has begun staging "previews," based on the Broadway model. These allow an artist to give newly finished works a "soft opening," without press reviews. Karinne Keithley Syers's "Another Tree Dance," on July 27, is one such piece, a multimedia work utilizing choreography, music, and visual art.

This is MTA's sixth season, and their longest ever: 11 weeks. It began June 15 and continues until August 24. There will be three "Art-B-Qs" this summer, combining gourmet barbecue with performing art. (Vegetarian options are available.)

In an increasingly globalized world art scene, Mount Tremper Arts is defiantly local. The place feels like a peaceful, breezy refuge. Each of the artists remains in residence for at least a week, and by the time they perform, they've forgotten all the infighting of Manhattan cultural life. You feel like you're visiting them in their personal bungalow colony. The performance space resembles a studio—all one room, with no separate stage. Outside, you hear wind, or pattering rain. At the very least, Mount Tremper Arts is saving numerous New York City performers from nervous breakdowns.

It's disorienting to see avant-garde work pried from its urban ghetto, flourishing on the side of a mountain—and for the audience to be local electricians and Zen Buddhists, not rail-thin dancers in leotards. As an audience member, these pieces may be difficult, provoking, or feel strangely familiar, as if one saw the same show 12,000 years ago, huddled around a campfire in Africa.