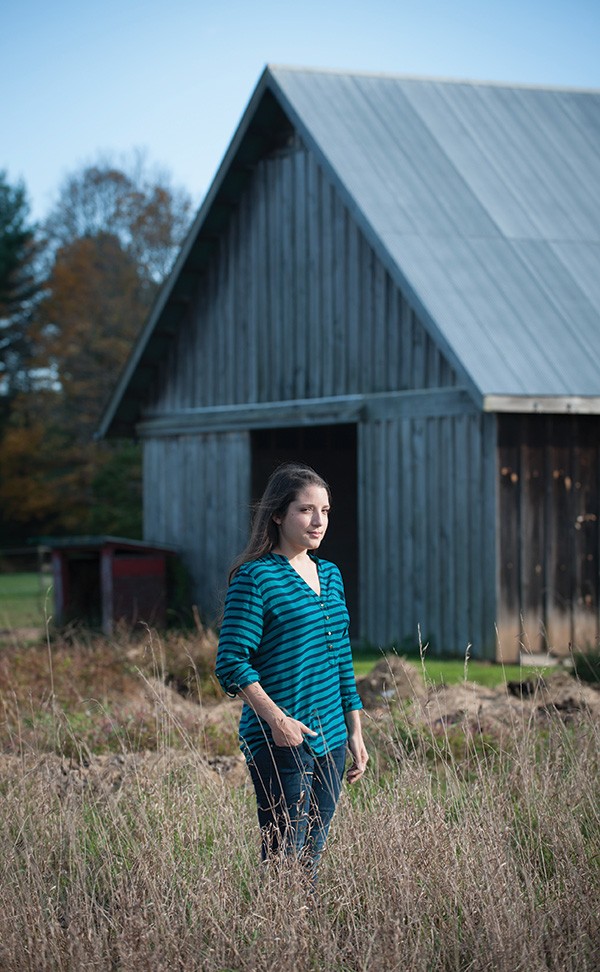 The woman cradling the chai latte is a far cry from the mad-eyed waif in the publicity photos accompanying her bestselling memoir Smashed: Story of a Drunken Girlhood (Viking Press, 2005), and its searing sequel Fury: True Tales of a Good Girl Gone Ballistic (Viking Press, 2010). Koren Zailckas still stands out, but with a different kind of energy. Amid the weekend hurly-burly of the Last Bite café in High Falls, her heart-shaped face and hazel eyes convey a disarming, unexpected serenity; she's at home in this wide-planked hole in the wall. While both Zailckas's memoirs and her new thriller Mother, Mother suggest a flinty, avenging angel, her presence here is more country mom. She's funny, quick to laugh, and eager to chat about her first novel, set right here in High Falls, where she and her musician husband, Eamon, moved with their infant daughter in 2010, leaving Brooklyn in the rear view of their Subaru.

Clearly, she's gone native. With two more kids in as many years, a buzzworthy book (Library Journal compares her to Dostoyevsky and Mann) and a local coffee shop that makes a killer chai latte, she's in high cotton. "When we came here it was like coming home," she says. "There's so much outdoor space, and things to do that we can afford, and Eamon has his own room where he can sing as loud as he wants. I can walk on the rail trail when I get stuck writing. It's a huge relief. We couldn't believe we hadn't thought to do it sooner, really."

Zailckas needed nature and, just as important, friends. "In Brooklyn, I was missing a community of writers," she says. "I never got my MFA, or went to grad school, never cultivated those kinds of friendships with creative people. But coming up here, meeting Martha Frankel, and being a part of the Woodstock Writers Festival workshops and panels, plus this great community of readers— it's been wonderful."

When I tell her I've just finished the riveting Mother, Mother, and I'm about 120 pages into Smashed, she loosens a rich ripple of laughter. "Oh dear," she says. "Double oh dear. I don't think I could read 120 pages of Smashed in the life I have now." When she discusses the bedeviled narrator of Smashed, who struggles with alcohol from age 13 to 23—i.e., her erstwhile self—she sometimes slips into the third person. "It's a book of someone with no boundaries," she says with a maternal sigh. "Someone who's going to lay it all out there, cringe-worthy or not, in a way that's not entirely healthy: 'Look at me, I'm the bad example, the face of this rise in binge drinking.' In my family, that was my job [to be 'bad']. I hadn't yet realized that when I was writing Smashed. It's mortifying in retrospect."

Nevertheless, Smashed was a smash, and Zailckas enjoyed raves in the New York Times Book Review, People, Entertainment Weekly, and scores of other media. She worked it for a couple years, rising to the glare, giving many interviews and a few lectures. Yet, disagreements with her younger sister about their upbringing in 1980s and '90s Massachusetts, particularly with regard to their mother, got Zailckas thinking. (Mom does not come off well in Smashed, although it is, interestingly, dedicated to her.) "You write memoir," she says, "and it always opens up those questions. People say, 'But I remember it like this.' After Smashed, my sister and I started comparing notes. It's weird. We have completely different experiences."

Rather than see that as a problem, Zailckas used it as inspiration for her novel. "With Mother, Mother," she says, "I wanted to explore how siblings can be raised by the same people, yet still have different moms and dads." To show these differences, Zailckas splits the narrative. Chapters alternate between troubled teen Violet Hurst, and Violet's smart-but-gullible younger brother, Will. Lording over the Hurst kids is the monstrous megalomaniac Josephine, a mentally ill matron to rival Joan Crawford and Norma Bates. (Zailckas says she would cast Julianne Moore in a movie version.) Beautiful Josephine is a study in narcissistic personality disorder, about which Zailckas has educated herself—by accident of birth and by design. Josephine is a charmer with "beauty pageant posture" who bakes scones for Child Protective Services—and lies with relish, abandon, and Oscar-worthy commitment.

When the curtain rises on Mother, Mother, Josephine has sent for the men in the white coats, accusing drug-sick Violet of slashing Will's hand while in a hallucinogenic rage. We meet Violet in the psych ward, coming down, on suicide watch. Josephine has banished her there, ostensibly "to protect the family." She's withdrawn Will from school, independently diagnosing him as autistic and epileptic, ailments she constantly fetishizes, even when—especially when—outsiders suggest he suffers from PTSD. Hanging over all is the specter of the eldest Hurst child, "good girl" Rose, gone for a year, vanished after an uncharacteristic meltdown; this mystery slowly unravels, plunging the already-shaky family into chaos. No one possesses the gumption, or, in Josephine's case, the desire, to fix anything. On the contrary.