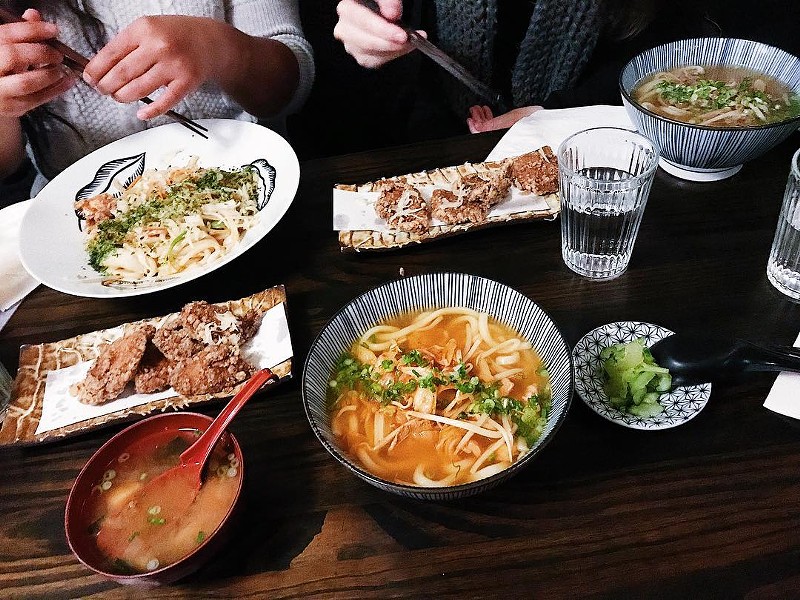 With an exploding craft beverage industry and a vibrant, varied farming community, the Hudson Valley is a dream playground for aspiring and established chefs. The virtuous cycle of culinary innovation keeps churning in 2019, with a batch of culinary rock stars preparing to launch fresh new ventures in the coming weeks and months. As the temperature warms, expect the upstate food scene to get downright hot.

Here are the Hudson Valley eateries restaurant openings we are most eagerly awaiting.

In Beacon, stomachs are rumbling for the soft opening of the Hudson Valley Food Hall and Market in mid-February. Beacon native Marko Guzijan has curated a select group of local vendors. “We’ll have Tibetan dumplings, a Sweet Greens-style salad bar; and Miss Hattie, who’s originally from South Carolina, will be doing southern barbecue. There’s a fantastic taco place opening a third location here, and a couple from Pleasant Valley (she’s local, he’s from Bombay) doing Indian wraps. We’ll have Caribbean jerk chicken. And there’s a beautiful bar in the back, run by award winners, with local beverages and a glorious view of Mt. Beacon.”

Chef Youko Yamamoto, who captivated hearts and taste buds during her 10-year tenure running Gomen-Kudasai in New Paltz, is rolling out Gomen-Ramen, a noodle shop just around the corner from UPAC in Kingston, this March. “The noodles will be non-GMO, sourced from a Japanese friend, and the broth will be slow-cooked with exquisite care,” she says. “We’ll have a very traditional meat broth with strong robust flavor, just made for slurping, along with wheat-free and vegan choices.” Half of the Midtown space will be a ramen bar and the other half will be a Japanese drinking bar with some simple small plates, sake, and a small stage for live music.

It’s impossible to talk about Kingston’s development without mentioning Charles Blaichman, who in the past few years, has purchased four historic Stockade District buildings that will function as a four-part, high-end boutique hotel and seven other buildings throughout the city. (The first of the four uptown buildings—which will be the cornerstone and hub of the hotel concept, with its lobby, ground-floor restaurant/bar, and 10 independently designed rooms—will be set in the old corner bank building at 301 Wall Street and is slated to open later this year.) In the meantime, the first Blaichman restaurant, Lola, is scheduled for a June 1 launch date. Located at 243 Fair Street, the eatery will be a neighborhood wood-fired pizza restaurant with a cocktail bar serving tiki-inspired classics and a 45-seat garden patio. Lola will feature menus developed by with Executive Chef Gabe Ross in consultation with acclaimed chef and restaurateur Zak Pelaccio (Fish and Game and Backbar) and his partner Kevin Pomplun. The following month, on July 1, Fare and Main will open its doors as a market and café serving coffee, breakfast, lunch and afternoon snacks, dine-in, to go and delivery. Expect seasonal prepared items you can finish at home, tabletop presentation pieces and curated kitchen ware.

Fans of the late, much-lamented Elephant are licking their lips at the news that Chef Rich Reeve will be back in the kitchen at Bia in Rhinebeck starting in late March or early April. Over a decade in Uptown Kingston, Reeve developed a cult following around his experimental tapas and impressive wine list. Owner and hospitality/beverage manager Kyle Kelley says Bia will feature “exceptional cuisine with a focus on quality ingredients, truly warm and welcoming hospitality, inviting and evocative space, and a thoughtful bar program that elevates the food.” Bia (bee-ya) is old Irish Gaelic for alimentation—the provision of nourishment or other necessities of life. “The food and service will be our best reflection of what that word ‘Bia’ truly means,” Kelley says. Some recipes under development? Venison carpaccio with truffle whipped ricotta, Coleman’s mustard, shallot crispies, smoked sea salt; and crisp pork belly with Spanish-style black pudding, and a cider reduction. Yep, we're pretty excited.

Work/life partners Howard and Chris Jacobs and Chef Alex Burger, the trio behind The Amsterdam, are about to roll out the Lucky Dragon, a farm-to-chopsticks Chinese restaurant in Rhinebeck that will dish up mix of “elevated street food and contemporary classics,” according Howard Jacobs. Along with top-notch European kitchens, Burger has cooked in Thailand, Hong Kong, Malaysia, and Singapore. “We’ve found an Asian marketplace in Albany with the same ingredients you can get in the city,” Jacobs says. “Think accessible comfort food, very aromatic and sensory, sizzling, heaping platters.” The brand will be unleashed on the auspicious date of February 5, Chinese New Year with the restaurant actually opening at the end of March.

Michael Dorf, the creator of New York City’s iconic Knitting Factory and assorted other venues, has acquired the historic Montgomery Mills complex in Montgomery and is installing a Hudson Valley branch of his City Winery empire, which currently has outposts in major cities like New York, Chicago, Nashville, Boston, and DC. The 22-acre property, set alongside the Wallkill River, will include an 8-acre vineyard and restaurant, wine tasting bar, event space, and 14-room boutique hotel. The $5 million project, complete with eco-friendly hydropower and solar power, is scheduled to be completed by 2022, but the restaurant and wine bar are expected to be ready for the tasting by fall 2019.