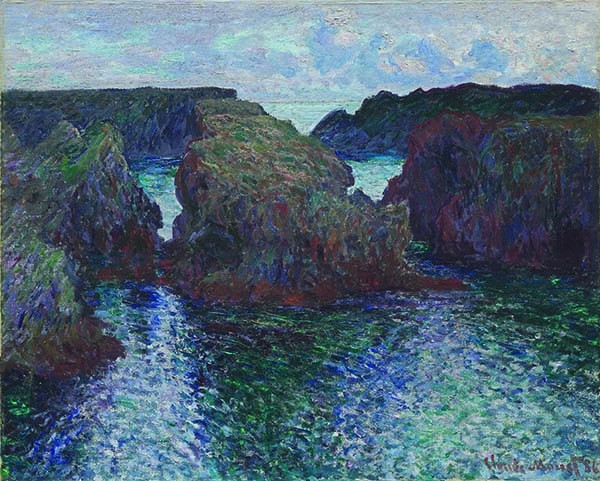 In 1952, after seeing one of Claude Monet's late paintings, Ellsworth Kelly arranged to visit the artist's last studio in Giverny, France, which had grown dilapidated. The next day, Kelly painted his first monochromatic painting, Tableau Vert. "Monet/Kelly," at the Clark Art Institute in Williamstown, Massachusetts, is the first art show to explore the French artist's influence on Kelly. It includes nine canvases by Monet, two by Kelly, plus 19 of the American's drawings. Kelly, who is 91, suggested the exhibition, and designed its layout. "Monet/Kelly" is installed in the new Clark Center, a 42,600-square-foot addition that opened last July 4.

Ellsworth Kelly was born in Newburgh in 1923, but raised in New Jersey. In 1943, he was drafted into the Army, and volunteered for a camouflage battalion. Afterward, Kelly studied at the École Nationale Supérieure des Beaux-Arts in Paris on the GI Bill. From 1948-1954, he remained in France, where he developed his mature style. "Kelly is of that generation of the Abstract Expressionists and the color field painters, but he's not part of any movement," explains Richard Rand, senior curator of the Clark, "partly because he was living in Paris during the late '40s and early '50s when those movements were coming together in New York. His brand of abstraction is really unique."

Monet's late paintings were ignored for decades, until Abstract Expressionism made them seem prophetic. But this lineage isn't so simple. The young artists of the 1950s painted with fury and intensity. Monet was an elderly Frenchman gazing at his lily pond. Although he produced brushstrokes that look like multicolored, writhing snakes, Monet's images emerged from contemplation. Ellsworth Kelly pursued Monet's tradition—what one might call Impressionist Zen. "Kelly's type of abstraction really does begin in nature; it's a distillation of shapes, motifs that he has seen in the world," Rand observes.

Kelly visited Belle-Île, an island off the coast of Brittany, three times: in 1949, 1965, and 2005. On each trip he made drawings, and each time he was a different person: a timid student, a brash "art star," an 82-year-old man. Fifteen of these sketches appear in "Monet/Kelly." Only one has been previously shown, which gives the collection an air of secrecy, as if you were reading Kelly's private diary. Kelly chose three canvases by Monet that depict the same island in 1886 and 1887.

One recent painting hangs in the exhibit: White Curve in Relief over White (Belle-Île) (2013), based on a drawing Kelly made in Brittany in 1949. It consists of two white canvases, one shaped like a half-moon, the other a triangle. Just as a drawing abstracts a landscape into lines on paper, White Curve carries the process one step further, into pure geometry. Kelly even avoids the necessity of making lines, by using customized canvases. The 90-year-old artist is looking back at himself as a youthful student tentatively sketching out an ocean view. Now, with masterly assurance, Kelly reduces that image to two lines. White Curve has minimalist complexity—it's simultaneously a painting, two paintings, an installation, and a sculpture.

"Monet/Kelly" suggests that Kelly's art is rooted in landscape. (He has been living in the Columbia County hamlet of Spencertown since 1970.) In upstate New York, for at least four months of the year, we behold white on white. A field full of herbs and grasses becomes a monochrome canvas, with a few mysterious bulges. Ellsworth Kelly paints what he sees.

"Monet/Kelly" is being exhibited at the Clark Art Institute in Williamstown, Massachusetts, through February 15. (413) 458-2303.

On the Cover: Kawase Hasui