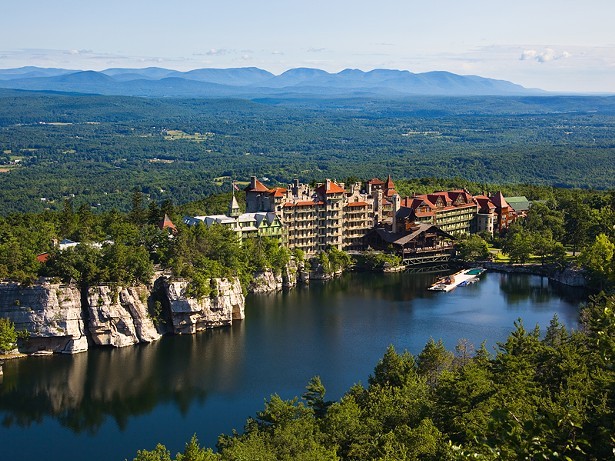 People come from all over to stay in the mountaintop Victorian resort nestled among 40,000 acres of forest overlooking Lake Mohonk, but prospective guests aren’t the only ones taking an interest in the Mohonk Mountain House in New Paltz. The idyllic and historic property has been the backdrop for several movies and TV series, the most recent of which includes the fifth season of Showtime’s “Billions" and Amazon Prime’s new series, “Upload.”

Laurent Rejto, director of the Hudson Valley Film Commission (HVFC) which has assisted over 500 productions by referring local locations, crew members, and actors, thinks it’s no surprise that Upload and Billions choose to film at Mohonk. “It’s incredibly beautiful,” he says.

Although filming at the resort might be difficult when trying to schedule production around the busy season, Rejto thinks that the Mountain House is worth the wait. “It’s ideal,” he says. “It's one of those fairy tale settings that you just can't imagine.” The Victorian-era castle’s towers overlook the pristine mountain lake and the lush Rondout Valley, with the Catskills just beyond.


Amazon Prime’s “Upload” is a science-fiction comedy starring Robbie Amell, who plays a computer programmer in the not-so-distant future of 2033. After dying unexpectedly in a car crash, Ammell’s consciousness is “uploaded” into dreamy digital afterlife, AKA Mohonk. The 10-episode series, created by Greg Daniels of "The Office," was filmed in part at the resort in November 2017. The crew for “Upload” mainly shot plates of the exterior without any actors present, which is footage that can be digitally manipulated later on. Shots of the Mohonk Mountain House can be seen in the series trailer.


Showtime’s “Billions” follows the cat-and-mouse game between a wealthy hedge fund manager, played by Damian Lewis, and the United States attorney, played by Paul Giamati, who tries to prosecute him for his financial crimes.


The fifth season of “Billions” not only featured Mohonk in one of their episodes, but the actors also stayed at the resort overnight during their tight, two-day filming period according to the resort’s owner, Eric Gullickson. “We have the amenity of the Mountain House, the hotel rooms, quality food and dining, and a spa to be able to deliver the quality of service that actors and crew would expect,” he says.


After the “Billions” episode featuring Mohonk aired, traffic on the resort’s website doubled. “It's very good, obviously for us, because we are a small, independent property,” says Gullickson. “I think it's important to be able to leverage these film shoots and these productions to promote and market Mohonk, but it's also important to understand that it does benefit the rest of the valley.”

Although Gullickson believes that Mohonk’s natural beauty and close proximity to New York City makes it an attractive filming site for film crews, he admits that a recent tax cut for filming likely makes the picturesque location even more enticing to producers.


In 2016, New York expanded their tax credits for filming to Ulster County. The tax credit is a generous 45 percent, making the county a competitive place to film internationally. “The Hudson Valley, which had already been in a location where some film agencies, writers, and directors were interested in, became even more of an opportunity,” says Gullickson.


After the tax cut was enacted, the Hudson Valley Film Commission welcomed filming crews for major productions like A Quiet Place (2018) starring Emily Blunt and John Krasinsky, which filmed in Pawling, Beacon, and New Paltz; Avengers: Endgame (2019), which filmed some scenes without the star studded cast in Staatsburg and the Town of Esopus; and The Irishman (2019), directed by Martin Scorsese and starring Hollywood giants like Robert De Niro, Joe Pesci, and Al Pacino, which had scenes filmed in Sloatsburg, Mt. Pleasant, Tuxedo, Suffern, and Washingtonville. The Mohonk Mountain House, which has been a filming site for at least eight productions according to Gullickson, plans to continue to accommodate film crews in the future, despite the current delays caused by the COVID-19 health crisis. “Having come off of this past season with ‘Upload’ and ‘Billions,’ we are very welcome to conversations with film studios,” he says. “We hope to do more.”


Its recent cameos are not the first nor the last time Mohonk sparks creativity. The resort is rumored to be the inspiration for Stephen King’s novel The Shining, which was later adapted into the 1980 cult classic film starring a young Jack Nicholson. Mohonk Mountain house, which has been closed since the start of the COVID-19 lockdown in New York State, plans to reopen its doors to guests on June 15.