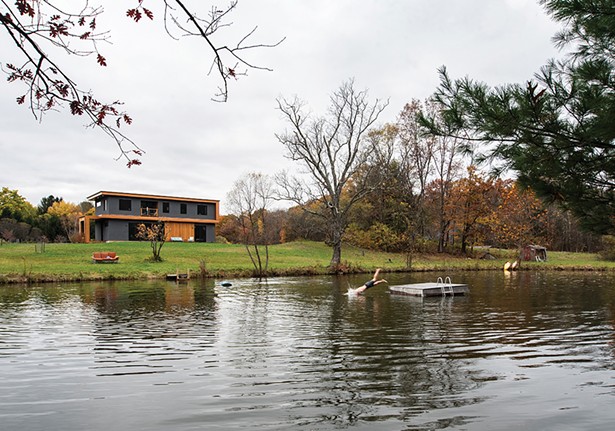 When Erik Schmidt and Sequoia Neiro started dating, she taught him a short cut. The two were regularly meeting in Red Hook to take the Metta Center's Kundalini yoga classes together and, since Neiro had once lived on the nearby Rokeby estate, she knew all the backroads. Schmidt was coming over from Kerhonkson, where he had built a straw-bale house and run a sheep farm and cheesemaking business with his late wife. To save travel time, Neiro suggested Schmidt cut along the road bordering the Rokeby estate. That's how Schmidt happened to drive by the "For Sale" sign propped in front of a wild, open field sloping gently to a large pond. "Maybe because I'd spent all that time farming, I've developed a good eye for land," says Schmidt. "I thought, 'Wow, that's a really nice piece of property.'" Bordered by thick DEC-protected woods and 180 acres of the Highland Swamp, the undulating land and manmade pond were brimming with life. Previous owners had stocked the water with bright koi and it had been fully adopted by the local fauna including snapping turtles, birds, and even a muskrat. 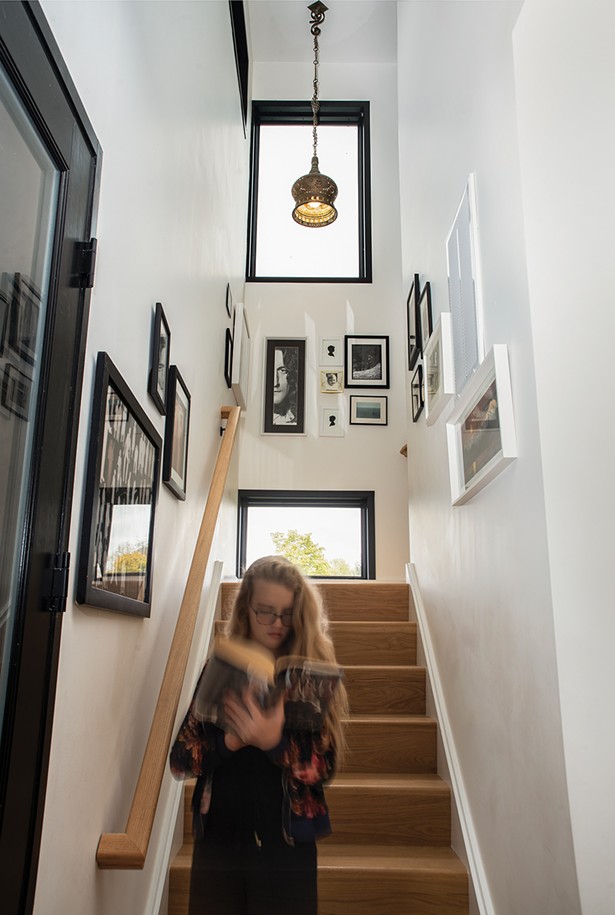 Schmidt and Neiro had already been contemplating the best way to combine their households. With two children apiece, all of differing ages and stages of schooling, various animal companions—including a horse named Chestnut—as well as Neiro's home-based massage practice, there were multiple factors to consider. Schmidt knew country life made his children happiest and Neiro didn't want to disrupt her sons' well-established lives in Rhinebeck. Also, the couple wanted a home where they could eventually age in place. "This would be, like, my 25th move," explains Schmidt. "I was done." What they needed was a place where everyone could slowly, according to their distinctive needs, grow together. They needed versatility—a place that balanced their respective pasts with a chance to start afresh.

Online searches for homes were futile. "Everything was either really uninspiring or would have taken too much work to renovate," says Schmidt. Neiro agrees: "We couldn't picture ourselves living in any of the places we found." Schmidt, who had already built two previous homes, had been contemplating building a third. The discovery of the open space on Rokeby road inspired him to seriously consider the possibility. Neiro, who admits she "thinks, thinks, and thinks" over details, was a bit daunted by the prospect. "I had renovated my hundred-year-old house in the village [of Rhinebeck]," she says. "I knew how much work it would take." They met with an acquaintance who had a well-established commercial architecture practice to entertain the prospect. "He sketched out this house which was cool, but would have cost about two and a half million more dollars than we had," remembers Schmidt. However, the architect did offer some sage advice. "Build what you really want," he said. "Think about how you want to feel. Think about what you really need and build to that: You'll figure it out," So they took the directive and ran with it. 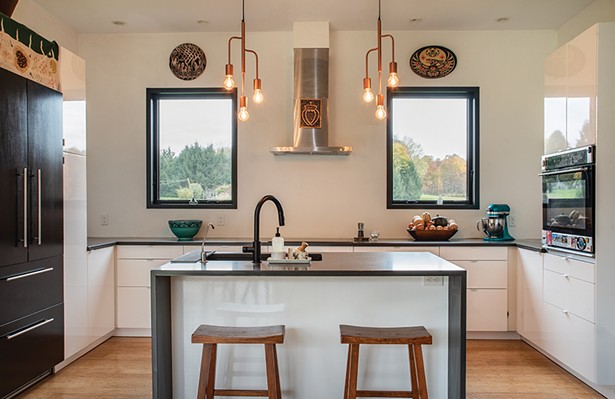 They bought the land in February of 2017 and spent the next nine months considering exactly what they wanted, down to the finest detail. "This house was completely designed for the people who are living here and utilizing it," explains Schmidt. They began by sketching their ideas, brainstorming off one another and then sharing the sketches with contractor and designer friends. Slowly, they refined their drafts into a doable plan that fit their vision and worked within their budget. "We made a lot of really positive compromises," says Neiro. When they finally came up with what they thought was a promising model, they worked with a friend's 3D CAD program to virtually "walk through" their design and get a feel for the interior flow. The tool proved invaluable. "It allowed us to see things in a different way," explains Neiro. Utilizing the tool to walk through multiple layouts, they honed the home's blueprint even further. Another designer friend lent software to virtually try out exterior colors and textures against the landscape, finalizing the design.

Neiro and Schmidt settled on a modernist style home with a flat roof, loosely based on a passive house designed by Marken Design + Consulting that was built in Kelowna, British Columbia. "Modernist architecture was something we both had a passion for but neither of us had done before," says Schmidt. "We wanted something clean, but not cold, that would interplay with the natural surroundings." They broke ground on the 2,350-square-foot home in November of 2017 and began the home's framing in February, orienting toward the east so that every room had a view of the pond. "Whenever you see water you feel like you're on vacation," explains Neiro. With the home's exterior design, the couple were mindful to avoid creating "a wart on the land," she explains. Rather, they wanted something that integrated with the landscape they were inspired by. To complement the changing colors of the surrounding trees, they clad the modernist structure in a slate blue stucco with copper and natural wood trim. They were finished by August of 2018.

Their careful collaboration has resulted in an interior space that is drenched in light. "Every single window captures a pretty picture," explains Schmidt. The open-concept first floor has windows facing all sides, with a sliding glass door leading eastward toward the pond. "It was really important to maximize the feeling of bringing the outside inside," says Neiro. Along the western edge, the home's kitchen has two rectangular windows, grey quartz countertops, and simple white Ikea cabinetry Neiro assembled with the help of her parents. A kitchen island separates the space from the living and dining room. Pendant lights gleaned from a trip to Paris hang above. "They were only 15 dollars," explains Neiro, "and I was able to fit them into my suitcase."

At the home's north end, the master suite has another sliding glass door leading outside. A wall of custom cabinetry two feet deep features interior lighting and maximizes storage while minimizing clutter. In the master bathroom, "I wanted it to feel like you were swimming in the Mediterranean," explains Neiro. She hunted down turquoise tiles for the shower and the couple installed a freestanding tub in a corner of windows that open, giving the feeling of bathing outside. "When the sun is setting, we get rainbows from the edges of the glass," she says.

Throughout the living and dining room, and up the staircase to the second floor, the walls are decorated with an eclectic collection of local and global artworks, as well as a few pieces by Neiro's son. Because Schmidt has an aversion to Volos—that is the lip that juts from the edge of stairs—the couple commissioned a custom-made Z-shaped staircase and installed small windows to add light to the stairwell. "We wanted the light for the living room, but also as people are walking up the stairs, they can see the view," says Neiro. "The bonus is that the pets sit there and stare out the windows—they really love it."

Upstairs, the couple focused on successfully bringing together two groups of teenagers, balancing their need for privacy with camaraderie. "Everyone got 12-by-12 feet, no one has any more square footage than anyone else," says Neiro. At one end of the floor, Schmidt's son and daughter have private rooms and share an interior bathroom. While Neiro has elected to remain in her home in the village of Rhinebeck until her sons have finished college, she still wanted them to have a space in the place that will eventually become the entire family's seat. The boys chose to combine each of their allotted 12-by-12 feet into one 12-by-24-foot upstairs den to enjoy when they visit. Eventually the couple will transform the room into a home gym. In the center of the second floor, a large communal space is the center for movies, games, and other shared activities. A balcony overlooks the pond. "I wanted was a zip line from the balcony across the pond," jokes Schmidt. "But on that I got overruled."