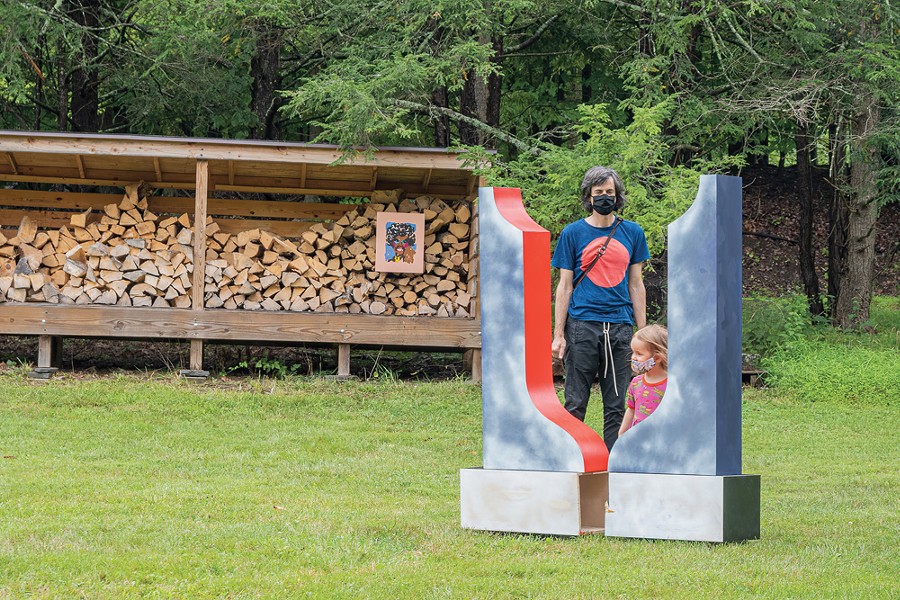 This month, we kick off Mixed Media, a new section of the magazine featuring cultural news. Despite COVID's impact on in-person events, regional artists and arts organizations have not stopped making and presenting new work, often in innovative and wondrous ways that turn the limitations imposed on us by the pandemic on their head, making a virtue of necessity. While we await the return of more in-person events, we will track the region's cultural moves here for the foreseeable future.

In June, Helen Toomer got the notion to organize a weekend-long celebration of the visual arts at locations across the Hudson Valley. While Toomer, who runs the Marbletown-based arts residency Stoneleaf Retreat, had been thinking about the idea for a couple of years, it never seemed like the right time to launch such an ambitious multi-organizational event. Then the pandemic happened, and art, nature, and public space were in short supply. "My goal was to reconnect people with art and each other. I wanted to highlight the creative magic that's going on up here in a safe space," Toomer says. "We have such a gift up here in terms of the space we have and the gift of the outdoors and the wonderful arts organizations that focus on having arts outdoors."


Working very quickly ("I'm someone who just doesn't think, I do," says Toomer), she assembled over two dozen partner sites, representing the finest outdoor art venues in the region, including Storm King Art Center, Olana, and Art Omi for what became Upstate Art Weekend. Over the weekend of August 29-30, visitors were invited to visit sites across the region for safe, socially distanced outdoor art viewing. For many who participated, it was the first time they'd seen art since March. "We think about art as a luxury, as unnecessary," says Toomer. "But art is imperative to our well-being, and so is the outdoors. Upstate Art Weekend is a combination of both those things." Toomer is planning to continue the event in 2021, adding more art sites and partnerships with local businesses.

Since 2018, the Whiting Foundation has given annual awards to literary magazines for excellence in publishing, advocacy for writers, and a distinctive contribution to the strength of the overall literary community. In September, Conjunctions, which is edited by Bard professor and author Brad Morrow and published out of Bard College, won a prestigious Whiting award, which comes with a $30,000 prize. Conjunctions, which comes out twice a year, has published the work of some of the best-known names in American letters (John Ashbery, Joyce Carol Oates, Amy Hempel), as well as serving as an incubator for new voices.


We reached out to Brad Morrow for comment and he responded via email. "As we approach our 40th anniversary of publishing innovative contemporary fiction, poetry, essays, and plays, all of us at Conjunctions are absolutely thrilled and truly honored that the Whiting Foundation has awarded us this prestigious three-year grant. Given the difficult times we are living through, the timing of such wonderful news couldn't be better. On behalf of our editors, writers, and production staff, as well as our steadfast publisher of the past 30 of those 40 years, Bard College, I'd like to express my great gratitude to everyone at the Whiting Foundation for helping us to continue and expand our mission of creating the 'living notebook' that is Conjunctions."

Six months after going dark in March, Denizen Theater in New Paltz will be reopening this month for the world premiere of Neil LaBute's new play, "True Love Will Find You in the End." One of the most controversial playwrights of this century, LaBute is best known for movies based on his work, including In the Company of Men and Some Velvet Morning. Like much LaBute's work, "True Love" is about the often-fractious relations between men and women. Harry Lipstein, Denizen's founder and producing artistic director, wouldn't say much else about the play, preferring to keep the staging a mystery. "Let's call it a post-coronavirus response to live theater," Lipstein says. "It's a creative response to our current times; we are embracing the restrictions and turning them into an opportunity."


One indication of this changed theater environment is the size of the audience: Each performance will be restricted to just 8 patrons. Denizen's black box theater normally holds 60 to 80 people. "Our theater is normally considered an intimate setting, given its size," Lipstein says. "We've taken that intimacy and put it on steroids." What might audiences expect in this hyper-intimate environment? Here's how the press release states it: "Eight audience members are safely placed throughout the black box theater while two voice actors tell a story supported by light and sound." Within that, what else happens is anybody's guess. Lipstein says that audiences will have to find out for themselves. The production is directed by J. J. Kandel, Denizen's artistic associate.

"True Love Will Find You in the End" will be performed at Denizen Theater from October 8-18, Thursday through Saturday, with performances at 6pm and 8pm, and performances on Sunday at 2pm and 4pm. Denizentheatre.com.

While all aspects of the college learning environment have been disrupted by the pandemic, one of the disciplines most directly impacted by distance learning has been the theater. Theater thrives on intimacy, contact, and connection, both in rehearsal and performance, and this has been impossible given current safety concerns. Ken Goldstein, professor of design and chair of the SUNY New Paltz Department of Theater Arts, has been working with his fellow instructors since March to not only figure out how to teach theater, but how to produce it as well—staged plays are an intrinsic part of the theatrical curriculum at SUNY New Paltz.


"We knew that we were going to do everything we could to tell stories," says Goldstein, about the fall 2020 productions that the department is rolling out. "We're going to have 10 staged readings of much smaller cast sizes and much shorter rehearsal times," Goldstein says, but indicates that how the productions would take place would evolve as conditions on the ground change. "We have a framework, but we're prototyping different models for the students and bringing them to the public," Goldstein says. "We want to recreate the energy of live interaction even though the action is virtual."

In September, there were virtual rehearsals and livestreamed readings. Goldstein is hoping that as the semester progresses, there could be an opportunity for students to perform a socially distanced mass reading from the theater for a virtual audience, and perhaps even a performance with socially distanced cast and audience in the theater together. Plays slated for the fall semester include Clifford Odets's "Waiting for Lefty" (October 3-4), "Between Here and City of Mexico" by Tony Meneses (October 17-18), Play On! Shakespeare's reimagining of "Two Gentleman of Verona" with an all-female cast (November 7-8), and M. J. Kaufman's "Eat and You Belong to Us" (November 21-22).

End of the Apples?

Playwright Richard Nelson has been writing plays about the Apples, your typically dysfunctional family unit, since 2010, when "That Hopey Changey Thing" premiered at the Public Theater. The play told the story of four adult siblings——Barbara (Maryann Plunkett), Richard (Jay O. Sanders), Marian (Laila Robins), and Jane (J. Smith-Cameron)—and was set in Rhinebeck, over dinner on November 2, midterm election night. Nelson, who lives in Rhinebeck, is a master of writing dialog that speaks to contemporary issues without having his characters speak directly about them. Three more Apple plays followed—"Sweet and Sad" (2011), "Sorry" (2012), and "Regular Singing" (2013)—before Nelson turned his attention to two other Rhinebeck families, the Gabriels and the Nelsons, who were the subjects of a novel and a play.


In April, Nelson premiered a new Apple play, "What Do We Need to Talk About?" on Zoom. (To our delight, the character Jane noted during the play that she was a writer for Chronogram!) Hailed as the "first great original play of quarantine" by the New Yorker, the play was the first in a series of virtual theater pieces Nelson and crew would stage over the summer, followed "by And So We Come Forth" in July. Nelson's final Apple Family Zoom play, "Incidental Moments of the Day," was released on September 10.

"Incidental Moments of the Day" will be available for streaming at Theapplefamilyplays.com and on YouTube through November 5. 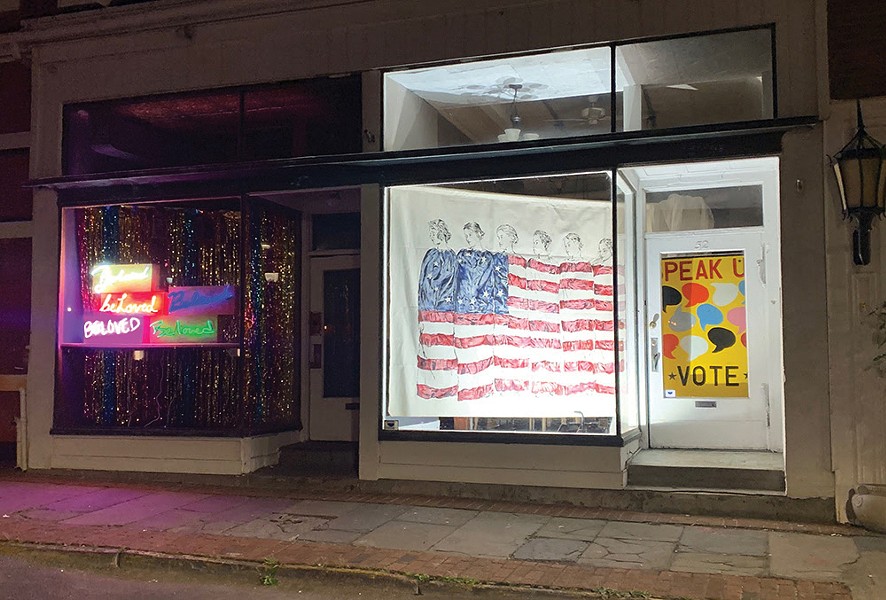 While COVID-19 has put the kibosh on the annual O+ Festival that normally fills Uptown Kingston with music and art on the second weekend in October, the festival has installed a temporary exhibition in the storefront windows to showcase the work of festival alumni. "PO+p Up 2020" will feature 40 artists in a dozen locations. "The COVID-19 pandemic has meant the cancellation of gallery openings, conventions, and commissions, leaving many independent artists facing financial hardship," says Jesika Farkas, who is organizing the exhibition with O+ board member Michael Pisacane. "All the artworks in the windows are available for sale directly from the participating artists." Each artwork will have a corresponding QR code, which can be scanned by viewers to learn about the artist and to be connected to the artist for a direct sale. A digital map of the locations of "PO+p Up 2020"is available at Opositivefestival.org.