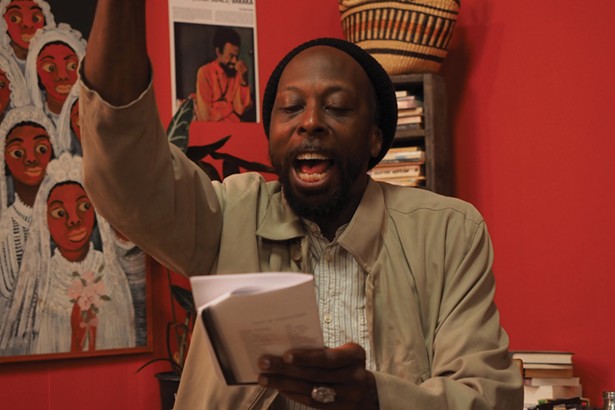 Described by the artist as "a specifically proportioned chamber with an aperture in the ceiling open to the sky...[that] can be autonomous structures or integrated into existing architecture," James Turrell's environmental Skyspace sculptures place the viewer—often groups of viewers, due to the creations' sheer size—literally in the middle of his works. The latest and largest of Turrell's Skyspaces, a repurposed concrete water tank measuring 40 feet in diameter and 40 feet high, will be on view at Mass MoCA in North Adams, Massachusetts, starting on May 29. Its ceiling will open during dusk and dawn to expose the sky while interior lighting creates the illusion of the sky being around the viewer; during the day, the dome will be closed to create a controlled sensory environment. The work joins "Into the Light," a long-term retrospective of Turrell's work at the museum—the only such collection in North America.

Chronogram congratulations go out to Hudson resident and filmmaker Ephraim Asili, whose experimental film The Inheritance has won Grand Prize in Paris, France's prestigious Cinéma du reél festival. Asili, a Bard College faculty member and DJ (his "In the Cut" airs monthly on WGXC), produced the feature-length debut through a commission from EMPAC in Troy, where it was shot over several months in one of the experimental media center's black-box studios. The Inheritance, which has also been named by the British Film Institute as one of the 50 best films of 2020, merges the histories of the Black Arts Movement, the MOVE Organization, and Asili's time in a Black Marxist collective in his native Philadelphia. The movie, which screened at Lincoln Center last month, is available for viewing via Grasshopper Film's website. At press time, it was announced the Asili was awarded a prestigious Guggenheim fellowship.

Bard College's celebrated SummerScape festival will be back this July and August. The seven-week summit of opera, concerts, dance, cabaret, and film culminates with the Bard Music Festival, which centers around a selected composer: 2021's featured figure is the influential French composer, conductor, and teacher Nadia Boulanger (1887-1979). Associated arts events that will take place at the Annandale-on-Hudson campus's Fisher Center and seasonal Spiegeltent, as the program offers lectures and presentations on Boulanger's life and the world that surrounded her. Highlights include the world premiere of I was waiting for the echo of a better day, a new commission from Bard's Fisher Center Choreographer-in-Residence Pam Tanowitz and Bernstein Award-winning composer Jessie Montgomery; and the first fully staged North American production of King Arthur (Le roi Arthus), the only opera by Boulanger's compatriot and near-contemporary Ernest Chausson. Events will be staged for limited in-person audiences both indoors and out while adhering to stringent safety protocols. Check the website for full schedule.

After hosting a March limited-audience, pop-up appearance by legendary cabaret performer Justin Vivian Bond and a virtual version of its always-anticipated Drone festival in April, the cutting-edge arts center Basilica Hudson recently unveiled its 2021 season, which includes plans for an expansion of its online programming. While the fireworks-festooned (Freak) Flag Day and post-Pride Day dance parties that the site traditionally hosts in June remain on hold, the facility plans to celebrate LGBTQ culture via online events, while arts-and-ecology programming is being devised for July. In August, the venue is once again partnering with the Hudson Eye festival to celebrate the local creative community, and September will see the return of the iconic SoundScape music and art festival, which this year will be held at nearby PS21 in Chatham. Ongoing are Basilica's Non-Fiction Screening Series of films at the Greenville Drive-In; Hudson As Muse artist-in-residence series; and Basilica Conversation Series Podcast. See the website for event dates and details as they become available.

With its state-of-the-art, open-air pavilion theater and 100 acres of trails and grounds, PS21 in Chatham is especially well equipped to adapt to safe and socially distanced programming. The performing arts center has revealed the schedule of its 2021 summer season, which commences on Memorial Day weekend with the first installment of its summer Modern Opera Fest. The opening program, which runs May 29-30, features two performances by the Heartbeat Opera company of "The Extinctionist," a commission developed in residency at PS21 that addresses the question of having a child in a world threatened by global warming.