The Latest Developments in the Hudson Valley Cultural Landscape 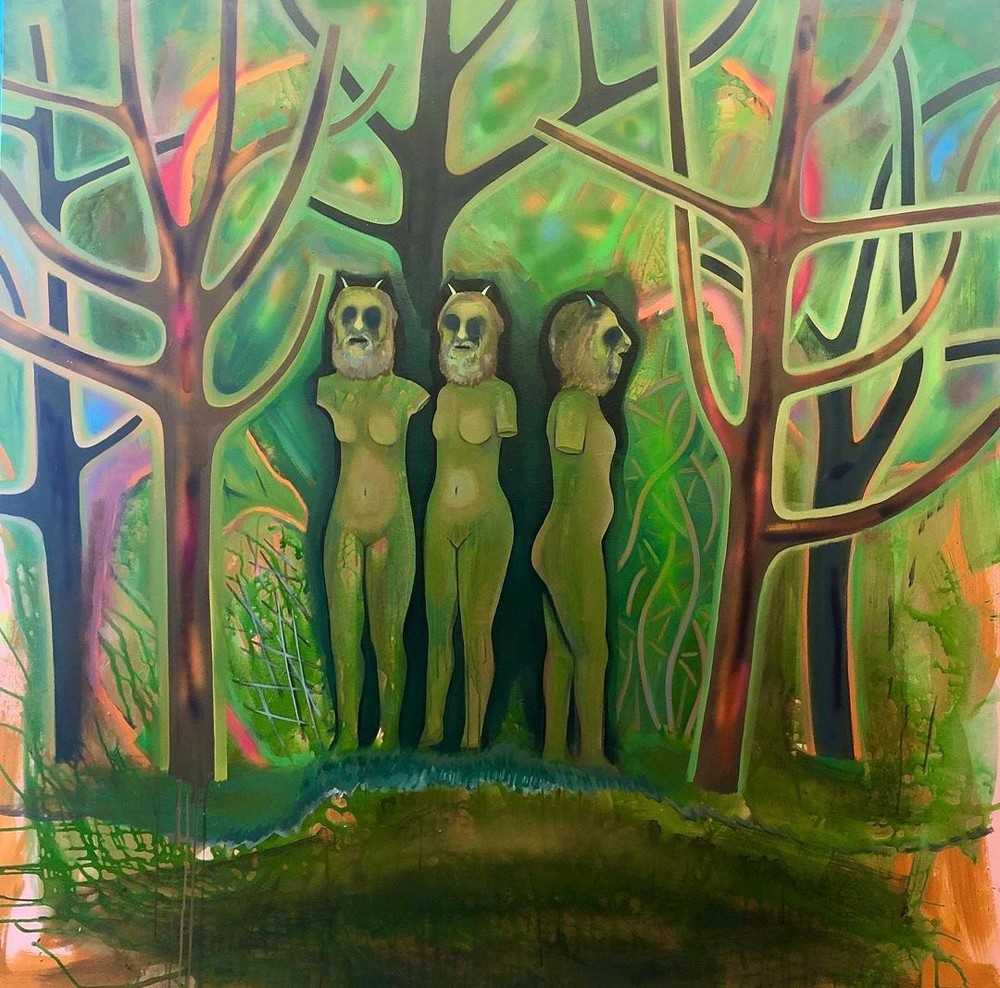 Welcome once again to Chronogram's ongoing overview of area arts-related news during these politically wrought and pandemically plagued times. This month, as we anticipate brighter, safer days, we can take solace in the fact that creativity in the Hudson Valley region is non-stop, always finding new ways to survive and thrive.

After 48 years of managing beloved independent movie theater Upstate Films, the business's founders, Steve and DeDe Leiber, who established the enterprise with board president Susan Goldman, have chosen to cede control of the operation to someone else. "It was just one of those moments in the making," says Steve about the decision. "We've been running it as a not-for-profit since 1972, and the pandemic really made it crystal clear to us that now was a good time to bring in new people and let them take over." Focusing on foreign, indie, repertory, and art-house films, Upstate Films maintains two theaters, the original location on Market Street in Rhinebeck and the latterly introduced Woodstock site on Tinker Street (formerly the Tinker Street Cinema, it was reopened under the Upstate name in 2010). While temporarily closed due to COVID-19, the Upstate organization has been presenting a robust schedule online.

In the nearly five decades since Upstate Films opened, the by-film-lovers-for-film-lovers venture has screened over 4,000 movies from upward of 100 countries—including the premieres of numerous genre classics and Oscar nominees—and welcomed more than 1.5 million viewers to its screens. Among the visiting film giants who've brought their works to Upstate are Jim Jarmusch, Jonathan Demme, Julia Reichert, Steve Buscemi, Shirley Clarke, Ethan Hawke, Emile De Antonio, Karyn Kusama, and many others. Ralph Nader, U.N. weapons inspector Scott Ritter, Neil Gaiman, John Sayles, Natalie Merchant, Todd Haynes, Pauline Kael, and other luminaries have spoken to Upstate audiences, and Andre Gregory and Wallace Shawn performed their original play "My Dinner with Andre" at its Rhinebeck site before it was remade into the classic 1981 film by Louis Malle.

Before Upstate Films launched, which occurred in an era when neither VHS nor cable TV—let alone today's streaming-on-demand services—was common for most households, Hudson Valley cinephiles had to travel to Manhattan to see non-mainstream offerings. The Leibers remade the local landscape for film lovers, bringing the Manhattan movie sensibility to our area, for which they deserve epic applause. But even though they're preparing to take their bow, fear not, film buffs: Upstate Films will continue, and it's not being taken over by some faceless multiplex chain. A national search via the community-based website Art House Convergence yielded, according to Steve, some experienced and enthusiastic new operators to assume management, and he and DeDe will stay on in an emeritus/advisory role until, at least, Upstate's 50th anniversary in 2022. But for right now, they're welcoming the turnover and looking forward to the vaccinations that will lead to the reopenings of most businesses.

"That will be a great day in America," says Steve.

by the Passion Fruit Dance Company on April 10. All will be viewable for free via Bridgest.org.

The sad news came recently about the passing of two locally linked musicians.


Tuba player and multi-instrumentalist Howard Johnson died on January 1 after a long illness. Born in Montgomery, Alabama, Johnson performed with the Band on the live album Rock of Ages and at their famous 1976 farewell concert that was filmed for the movie The Last Waltz. He led the house band on "Saturday Night Live" during the 1970s and was a familiar presence before audiences at Levon Helm's Midnight Ramble events in Woodstock as a key member of Helm's recording and touring bands. In addition to working occasionally as an actor, he led his own groups (the best known being the tuba ensemble Gravity) and performed and recorded with Charles Mingus, Taj Mahal, Gil Evans, Hank Crawford, Rahsahn Roland Kirk, Archie Shepp, James Taylor, Jaco Pastorious, and many others.

"I treasure these profoundly transformative and indelible experiences of both the social and natural world," multi-instrumentalist and world traveler Kali Z. Fasteau said when she was profiled in the October 2006 issue of Chronogram. "But I also discovered that we carry our thoughts with us wherever we go, so the real work on improving our heart, mind, and spirit takes place within us." Fasteau, whose voluminous discography as a leader on her Flying Note label blurs the borders between jazz, world music, and improvised styles, worked with Joe McPhee, William Parker, Dewey Redman, Archie Shepp, Rashied Ali, her late life partner Rafael Garrett, and other leading figures of creative music. Her performance with percussionist Joakim Lartey at one of the magazine-sponsored Cafe Chronogram salon events is fondly recalled by those who there. She died at her home in Monroe on November 20.

Kicked Out of Kinderhook, Nick Cave Art Bound for Brooklyn

It seems Kinderhook's town board can't face the truth. At least not when it's in letters that are 21 feet high. Groundbreaking visual artist Nick Cave's artwork Truth Be Told, comprised of black vinyl letters that fill up an entire 160-foot side of art dealer Jack Shainman's gallery in Kinderhook known as the School, was created and installed last year by the artist as a part of the national conversation on racial injustice that followed the murder of George Floyd by a Minneapolis policeman. It wasn't up long, however, before Kinderhook Mayor Dale Leiser and other village leaders demanded that it be taken down, stating that the text-centric work is a sign, rather than public art, which puts it in violation of local signage codes (the board also stated that the material used for the letters is flammable, which has been refuted). After a lengthy court battle with the town, Shainman and Cave accepted an offer to move the work to the Brooklyn Museum, where it will be displayed starting on May 14. In an open letter dated January 7, Cave, who is Black, said, "I know that the town of Kinderhook is not censoring the words I've formed, but rather the meaning that it has assigned to them, and in turn the ability of others to have access to my provocation." (As of press time in mid-January, Shainman planned to take the piece down in Kinderhook at the end of January.)

Dance has returned to Catskill, despite the COVID-shuttering of the town's high-profile, dance-oriented Lumberyard arts center. Last month the Bridge Street Theatre, although closed to live performances since March 2020, began its own four-month winter dance residencies program with virtual presentations of the Anh Vo dance company's BABYLIFT and a work in progress by Dorrance Dance company member Jabu Graybea. The web-based series, which continues this month with a performance of SWITCH by the LayeRhythm Experiment with Mai Le Ho on February 11 at 7pm, also includes a work in progress by Thang Dao on March 12; Chroma (working title) by Adrian Danchig-Waring, Norbert De La Cruz III, Joseph Gordon, Kristin Sztyk, and Virginia Wagner on March 26; and Trapped by the Passion Fruit Dance Company on April 10. All will be viewable for free via Bridgest.org.

As of this writing we don't know how it will happen, but we do know that it will be happening: Federal funding is coming to independent performing arts venues that have been hit the hardest by the pandemic closures. In December 2020, Congress voted to pass the Consolidated Appropriations Act, a $900 billion bipartisan economic relief package that includes the Economic Aid to Hard-Hit Small Businesses, Nonprofits, and Venues Act (AKA the Hard Hit Act), a $15 billion grant program through which the US Small Business Administration (SBA) will provide aid to struggling live performing arts venues, independent movie theatres, museums, cultural institutions, and related businesses. Also known as the Save Our Stages Act (SOS), the allotment will arrive alongside a $600 check for every American making up to $75,000 and a $300-per-week unemployment insurance enhancement for those who are currently out of work due to the pandemic, a group that includes nearly 100,000 live music professionals.


On January 12, Governor Cuomo announced the New York Arts Renewal Plan, which aims to resuscitate New York State's shuttered arts scene. "We must act," Cuomo said in a video address. "We cannot wait until summer to turn the lights back on and provide a living wage for artists." ($10 million has been made available to Ulster County venues through the plan.) Also in January, NIAID Director Dr. Anthony Fauci indicated that, based on current projections, the fall 2021 return of live performances he had predicted early last year still looked plausible—as long as herd immunity is achieved by vaccinating 75 to 80 percent of the population. "If everything goes right, this will occur sometime in the fall of 2021," said Fauci in a January 11 videoconference. "So that by the time we get to the early to mid-fall, you can have people feeling safe performing onstage as well as people in the audience... I think you can then start getting back to almost full capacity of seating. We'll be back in the theaters—performers will be performing, audiences will be enjoying it. It will happen."