Mirror, Mirror, on the Wall 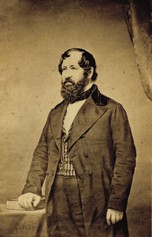 He was once known as “the Song-writer of America” and his house was a shrine like Graceland, but today he is largely forgotten—except at the Putnam County Historical Society. “George Pope Morris (1802-1864): Defining American Culture” gathers poems, books and sheet music by the writer, plus two paintings of his grandiosely named Cold Spring manse, Underhill. But Morris’s greatest contribution was to publishing. He edited and co-founded a number of magazines over a 40-year period, including the New York Mirror, the Evening Mirror, and the New Mirror. His last, the Home Journal, became Town & Country, which still exists.

Most of the writers Morris published are unremembered, and many were anonymous to begin with. The exceptions are notable, however: John Greenleaf Whittier, Edgar Allan Poe, Ralph Waldo Emerson, Nathaniel Hawthorne, and Washington Irving. Morris was a genius at finding the first heroes of American letters.  Both Poe and Walt Whitman worked for him, the former as a “mechanical paragraphist.” The exhibit displays Poe’s “The Raven,” originally published in the New York Mirror.

Morris’s literary output included a novel about the American Revolution, Whig and Tory, and the operetta The Maid of Saxony. His poems were easily adapted as song lyrics by such composers as Charles Horn and Stephen Foster. The songs have charming titles: “Jacob Gets the Mitten,” “A Sober Spouse for Me,” and “The Main Truck... Or, A Leap for Life.” “Woodman, Spare That Tree” survived into the 20th century, if largely in parody form. Here is an excerpt:

My heart-strings round thee cling,
Close as thy bark, old friend!
Here shall the wild-bird sing,
And still thy branches bend.

In the midst of an era of ruthless American expansion, Morris had the foresight to write an ecological song, 130 years before Pete Seeger. Morris was an early “weekender,” as passionately attached to the Hudson Highlands as any native. A love of the “great Hudson” led Morris to publish work by Hudson River School artists quite early, beginning with Thomas Cole’s sketches of the Eastern Catskills in 1825. Asher B. Durand supplied numerous etchings. Fifty years after the American Revolution, the Hudson had a role much like the Mississippi does today—as “the thoroughfare of the Union, bearing on its broad tide the treasures of agriculture, commerce, art, and luxury” (to quote from the New York Mirror). Morris also favored John James Audubon and the emerging school of American genre art. A number of etchings and aquatints appear in the show, including several that were later hand-colored. (Morris only published in black-and-white.)

Fred Haida, a resident of Croton Falls, amassed a trove of Morris’s letters, books, and magazines, as well as over 60 folios of his sheet music.  Haida’s collection was donated to the Putnam County Historical Society after his death in 1982. The show also includes two recordings of Morris’s songs. An extensive catalog is available.