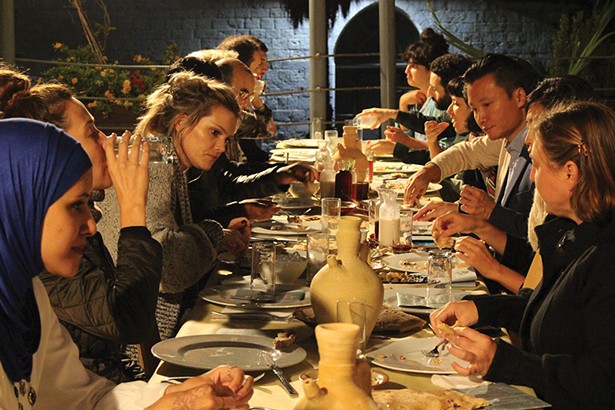 Akoub, also known as gundelia, is a spiny, herbaceous perennial plant native to higher altitudes in the Middle East. To many Westerners it probably wouldn't look like much; a scrubby, thistle-like weed that grows in rocky terrain and has long, thin, floppy leaves resembling those of a dandelion. To generations of Palestinians, however, akoub is a traditional delicacy, a staple crop with healthful properties, whose young stems are said to taste like a combination of asparagus and artichoke when cooked. The mountainous regions of the Palestinian State where akoub mainly grows, however, have been occupied by Israel since the 1967 Six-Day War, making it illegal for Palestinians to forage for the plant (the harvesting of thyme and sage are likewise controlled by Israel). The suppression of a food source, and the cultural implications that go along with that—the erasure of customs and collective memory surrounding an indigenous cuisine—are the focus of the Palestine Hosting Society, a project created by Palestinian artist and cook Mirna Bamieh.

"Seeing our ingredients sold as 'Israeli-produced' ingredients is a very hard thing for Palestinians," explains Bamieh via Skype from Warsaw, where she's in residence for an "installation kitchen" to study and share recipes and information related to Eastern European fermentation techniques. "It reminds us about losing our land and not having power over our own existence."

She created the Palestine Hosting Society in 2017 to preserve and share Palestinian recipes and, by extension, the cultural identity they represent, in the face of the constant, state-imposed displacement that threatens them. For the project, Bamieh stages on-site performance pieces centered around the preparation and serving of meals she's learned to create via oral tradition. She calls these performances "tables," and the world premiere of her newest table, titled Menu of Dis/appearance, will be presented locally by Bard College and Murray's in Tivoli this month.

"[The performance] is about the politics of disappearance—disappearance of memory, land, food practices, the body," she says. "But it's also about climate change, because climate change affects all of those things as well."

Born in 1983 in the West Bank city of Ramallah, Bamieh is the oldest of four children. Meals and their preparation were central to her family's life. "I think for all Arabs, food is close to our hearts," says the artist. "My mother is Lebanese [her father, a native Palestinian, is a doctor], so she brought us the dishes that she had learned from my grandmother. When I was little, I was in the kitchen with her all the time, there was always experimentation with the different recipes. The kitchen was like a lab, a place of fascination." There were also indicators early on that art would become a calling. "I was always drawing, and I'd take my drawings to show to my father when he came home from work," she recalls. "He would ask me, 'What did you draw today?' Both my father and my mother were very encouraging for me to express myself with art."

The Making of an Artist

Bamieh's entry into the art world was through the back door. After earning a BA in psychology at Birzeit University in Ramallah and an MFA in Fine Arts from Bezalel Academy for Arts and Design in Jerusalem, she worked in arts administration, writing grants and proposals, teaching, and curating at a gallery. Encounters with the politically oriented visual and sculptural "art of resistance" of Palestinian refugee Mustafa al-Hallaj and the "constructed situations" (which utilize human performer-interpreters) of Berlin-based Tino Sehgal, however, left her burning to make the leap to creating art full-time. In 2013, she left her gallery gig to take part in an arts work-study forum in Beirut. "I thought to myself, 'If I want to be an artist, I have to do this,'" she says. "It was a daring decision, and I knew I would need strength. But, little by little, I kept going, and I've never stopped."

The ever-building momentum has produced a diverse portfolio of abstract work that includes video installations, film, mixed media, and curatorial projects like 2015's Maskan Apartment Project, which invited outside artists to create works for display in the rooms of an apartment in Beirut, Lebanon. A breakthrough that reconnected her with her culinary passion came while she was pursuing a diploma in professional cooking. "The director of the training program said to me, 'You should do a project that puts art and food together'," says Bamieh. "I really liked that idea, and it made me start thinking about how I could do that." Her thoughts led to 2016's Potato Talks, a public performance piece staged on the street in several countries that featured seated participants peeling a potato as they told a story, one on one, to a seated viewer. Potato Talks, it turned out, would be the progenitor to the ongoing and more involved work of the live-art Palestinian Hosting Society.

To prepare for each of the project's individual presentations, Bamieh ensconces herself for weeks at a time in a chosen Palestinian city or village. There, she meets and lives among the locals and learns about each area's food culture, much of which is in danger of vanishing due to limited agricultural access and the rise of mass-marketed food. While in residence she researches the recipes that have for generations been at the heart of local life, listening to and gathering the stories of the elders who teach her how to properly prepare each dish according to age-old methodology—all the while taking into consideration how the dishes and their ingredients are connected to the geographical, historical, and sociopolitical life of the community. 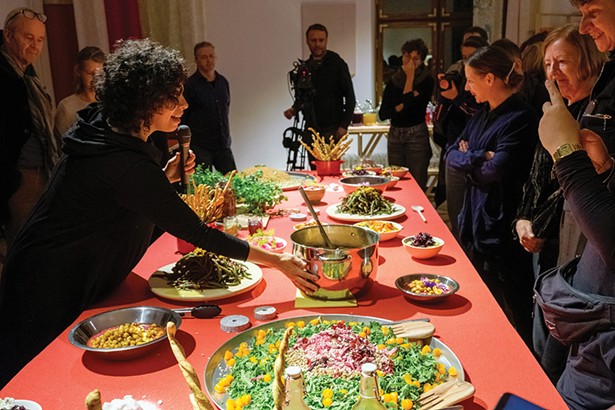 The final phase of the process is an intimate, interactive "dinner performance," in which she and her crew of collaborators serve an audience of 50 to 60 guests a sumptuous meal using their acquired knowledge, discussing the backstories behind each dish, and encouraging conversation about the food and the issues it relates to. Although the project by turn also speaks to the relationship between food, identity, and politics on a universal scale, according to Bamieh her initial impetus was the desire to find a way to empower Palestinians by giving them a way to reclaim some of their heritage.
"Because of the political situation, as Palestinians we are made to feel like guests in our own country, we cannot move around freely," she says. "With the tables, we are taken out of the passive role. We become the hosts." tweet this

Thus far, Bamieh has presented her themed PHS projects mainly in Palestine itself under such titles as Our Nablusi Table, Our Jerusalem Table, The Wheat Feat, The Edible Wild Plants Table, Trails of Taste-Telling, and A Wondering in Flavors: The Old City of Jerusalem, A Table, A Tour, and a Map.

The Table is Set in the Hudson Valley

Part of this month's Live Arts Bard Biennial "No Wall Remains" festival, which centers on the subject of borders, the three-day local premiere of Menu of Dis/appearance will present dishes from Palestinian cities and villages, as well as others that were preserved in Palestinian refugee camps outside Palestine and encompass the intergenerational food habits and memory of the Palestinian diaspora.


"Food is a great way to learn something new about another culture," says Murray's chef Rachel Lauginiger, who has been assisting Bamieh in cultivating the perishable locally sourced ingredients needed for the performance. (Bamieh, she says, is "bringing along a suitcase full of dried ingredients from Palestine"). "Mirna came over a couple of months ago to meet with me about planning the meals, and we got to know each other pretty well when it turned out we were both on the same train heading into the city one day," says Laugingiger. "Everyone at Murray's is really excited to be working with her on the event, and I'm personally excited because I really love Middle Eastern food. The red tahini is something I've never tried before. I'm really looking forward to that."

From her end, Bamieh is clearly looking forward to her taking her table to Tivoli, too. "For Palestinians, this is a way to put our food back on the table," she says, her voice crackling with excitement through your arts editor's PC speakers. "It reminds us all that food belongs to everybody."

Mirna Bamieh's Palestinian Hosting Society will present Menu of Dis/appearance at Murray's in Tivoli on November 21-23 at 7:30pm. Tickets are $35. Seating is limited. Fishercenter.bard.edu/liveartsbard

The original print version of this article was titled:
"Food, For Thought"