An Ancram Retreat Gets Thoughtfully Tweaked 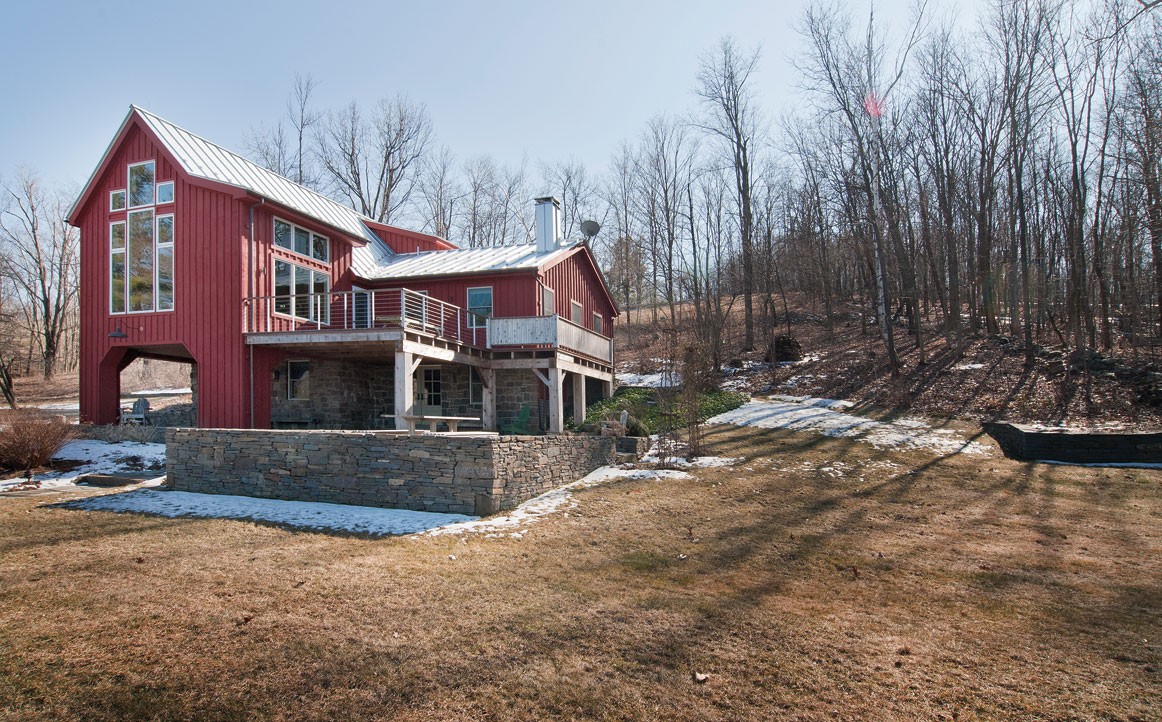 When Jeff Daly and Gary Delemeester built their contemporary barn weekend retreat in Ancram 15 years ago, friends thought they paid too much for their land, and opting for new construction was likewise extravagant. At the time, the market was flooded with bargain-priced ranch houses, and the area wasn’t chic.

“We just couldn’t see ourselves in anything the realtor showed us,” says Daly, the former head of design at the Metropolitan Museum of Art. “When this piece of property became available, it wasn’t difficult for us to decide to build something we’d actually love.”

Daly grew up in Troy, but has always had a special fondness for this particular section of Columbia County, rural but near New York. Delemeester grew up on a farm in Michigan; his grandfather was an architect. The couple met 24 years ago at an event near Tompkins Square Park in the East Village and married three years ago in Massachusetts.

Delemeester is the former director of product development for Tiffany & Co., so it’s not a shock that he holds firm convictions about the value of quality and good taste. “Gary always says, ‘Get it right the first time, even if it seems expensive’, because it will pay for itself in the long term,” adds Daly.

The Daly-Delemeester house sits on six-and-a-half acres, surrounded by large tracts of privately held land. When they bought the parcel, its only existing structure was an old trailer used as a hunting base. “We got rid of the trailer and cleared out the trees,” says Delemeester. “We thought a barn-style home, something like a saltbox, would fit in well with the area. The original house was 40 by 30, two stories, with a loft master bedroom and bath. But for some reason, the builder got the exact location we wanted five degrees off.”

In the end, however, that error proved a happy accident. Incorrectly positioned parallel an 18th-century property-line wall, the execution mishap “actually added an interesting foreground element to our view we had not previously considered,” says Delemeester. 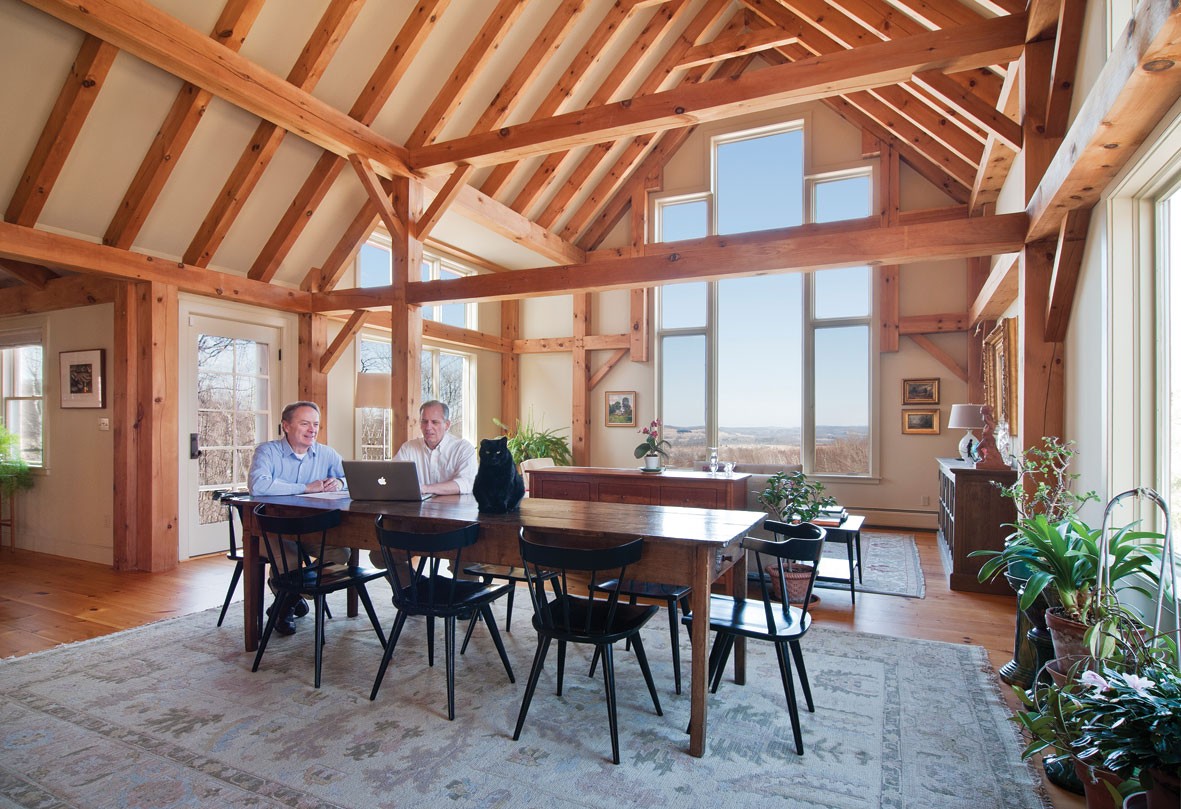 The Weekend to Full-Time Upgrade

A number of great restaurants had opened nearby. Many of the couple’s Manhattan friends had become their country neighbors, too. The gregarious couple, who prefer to eat out at least five times a week, began to find urban life less compelling. Their daily routines were almost wholly career-based.

So after 30 years at the Met, Daly decided to retire from the relentless pressure of updating the exhibits at one of the world’s most renowned museums. At the time, Delemeester was producing television commercials for a major advertising agency, and eager to exit that grueling schedule, too. Desirous of residing full time in
Ancram, Daly needed an office for the museum-design consulting business he soon launched.

So they hired a highly regarded architect, Dennis Wedlick, a resident of both Hudson and New York, for their rather unusual renovation project.

The task: add a home office, and make everything else better. However, for tax reasons, don’t enlarge the house more than necessary.

Before going out on his own, Wedlick worked for 12 years with the late Philip Johnson, a giant of modern architecture. Johnson’s masterpiece, The Glass House in New Caanan, Connecticut (1949), designed as his own residence and now a museum, is essentially a tangible architecture-theory essay, in which landscape views function as walls. Vastly more livable, Wedlick’s client-focused interpretation of the legendary Johnson aesthetic is however notably on display at the Daly-Delemeester home.

The couple was too modest to mention this, instead electing to regale me with stories about mid-century modern furniture bargains found here and there. Yes, as true believers in specialists, they had indeed hired a color consultant—in fact, they’d hired two!—and that’s why the paint colors are so rich yet subtly soothing. True fact: that’s an authentic Hudson River School oil, but see, it’s a depiction of the Swiss Alps, and “something Jeff inherited it from his aunt, of which we’re very fond,” says Delemeester.

But having noticed some of the other art on display, and given their sophisticated backgrounds, it didn’t take much digging to link Wedlick to Johnson. 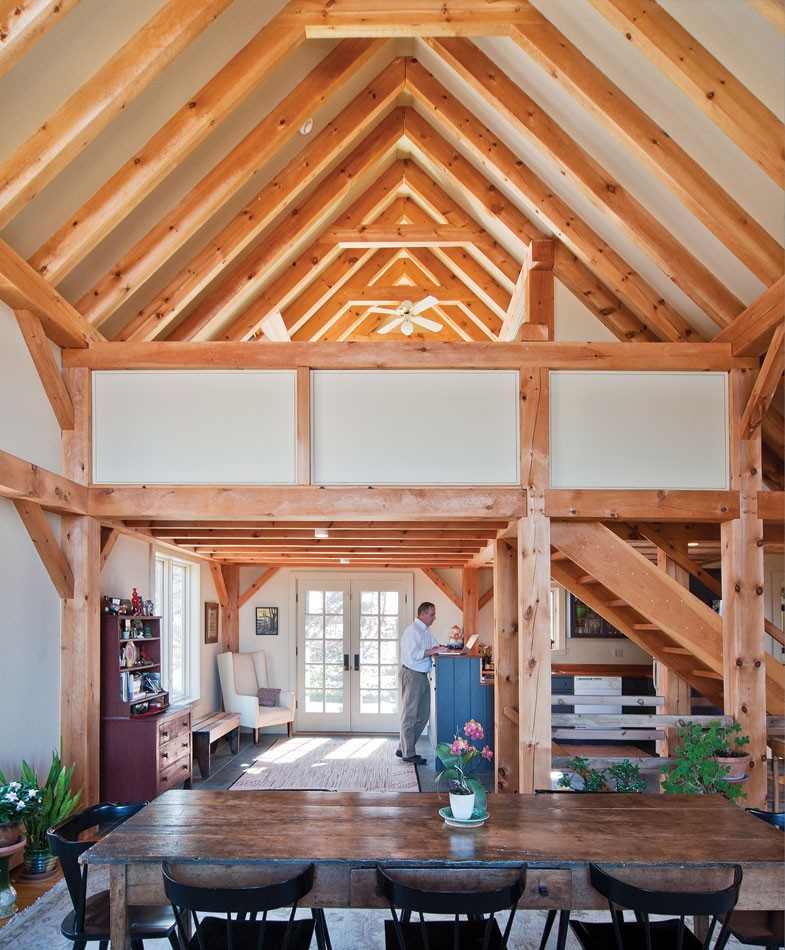 With the proceeds from the sale of their Manhattan apartment, Daly and
Delemeester could afford to substantially elevate their weekend retreat.

In the end, the couple spent a seemingly profligate $200,000 to add 200 square feet to the original 1,800-square-foot footprint and make other improvements. But once again, they’re confident they’ve invested wisely. The home is actually low maintenance—the exterior is stained instead of painted, so it will weather gracefully. All the reclaimed wood, stain-resistant upholstery fabrics, and rustic table surfaces forgive spills and other entertaining-related pitfalls. There’s plenty of storage tucked away in unlikely places, without blockading the open layout.

“It’s all about the view,” says Delemeester. “I can’t wait to get up every day.”

According to Daly, the renovation was deceptively complicated, because it entailed transforming an attractive dwelling into a truly great space. A few north-facing structural beams had weather damage and required replacing.

The enlarged living room, which sits above the office addition, features an 18-by-10-foot rectangular glass window. Although that’s a tremendous expanse of glass, there’s no chill, no draft. Delemeester credits the quality of both the Pella window materials and the expert installation.

Extensive new walls and terraces now surround the home’s exterior. Like the entrance’s stone steps, all are constructed of fossil stone from a quarry south of Albany. Delemeester says he finds it an interesting material with which to live because he’s become so familiar with particular impressions of ancient sea creatures like starfish.

The exterior hardscaping creates a striking frame, even in winter. In the warmer months, for a seasonal parade of color, Delemeester has planted literally thousands of perennials, including daffodils, day lilies, and hydrangeas.

Other changes: They added a metal roof and large deck, built a small back porch, and installed an air-purification system. The original metal doors were upgraded to wood with lots of glass. They buried the fuel tank by the driveway. Delemeester says that although he considered it carefully, it wasn’t economically rational to retrofit the home with a geothermal system. Yearly, they spend about $4,000 on propane for mostly baseboard heat; the office floor has radiant pipes. 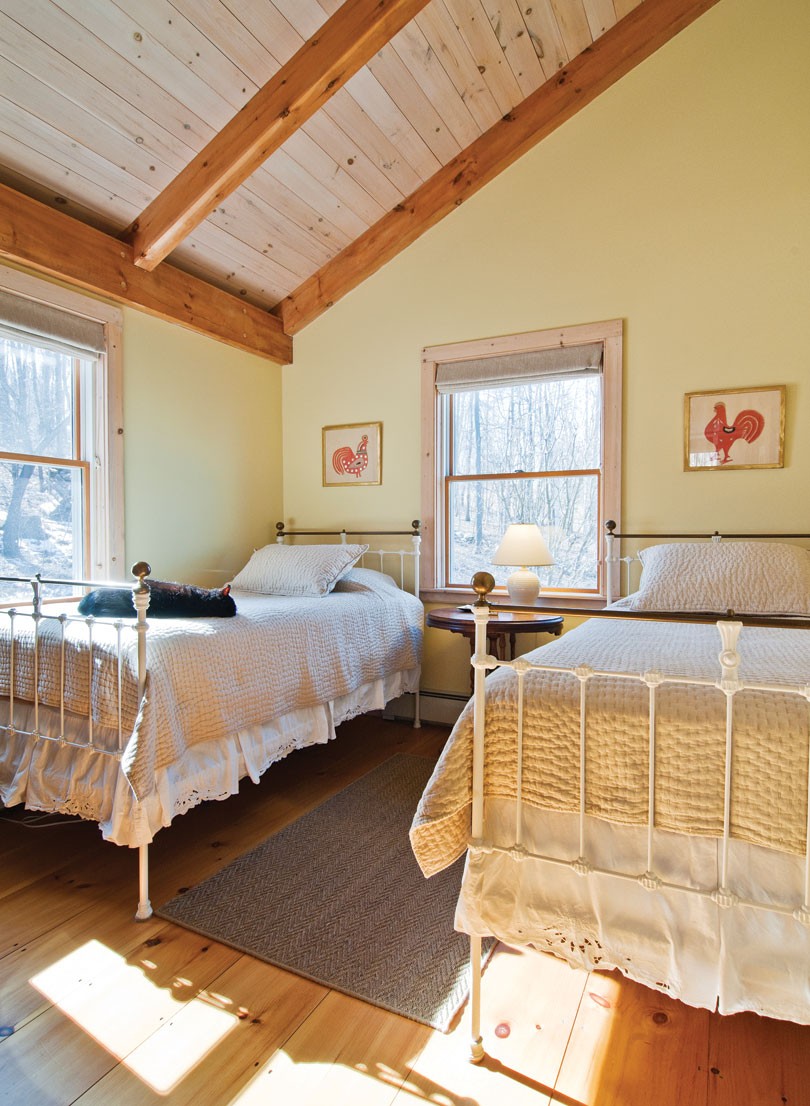 The Lunette Had to Go

“We toned things down a lot, made the interior less busy, to make the view stronger. Also, the large living room window we had before had a lunette at the top. When the architect saw it, he said, ‘Well, that’s got to go!’” says Daly. A lunette is a half-moon-shaped window. It’s also fundamentally inconsistent with the overall modernism of the Daly-Delemeester residence.

Delemeester handles all the couple’s finances, including the bookkeeping for his husband’s design business. He enjoys bicycling, and serves as a trustee for Great Camp Sagamore in the Adirondacks, a national landmark that was once the Vanderbilt family’s wilderness estate.

“I’m a lot busier in retirement than I initially planned on being,” says Daly with a laugh. His current clients include several specialized museums, a Park Avenue antique show, and numerous exhibits around the country.

Daly’s also chairman of the board of the Shaker Museum and Library in Old Chatham, the premiere collection of artifacts associated with the United Society of Believers. “Our house has simple and clean lines, and reflects Jeff’s love of keeping things simple and functional, very much in that gifted Shaker tradition,” says Delemeester.

Paint
Hammertown Barn in Pine Plains
3201 Route 199, Pine Plains
(518) 398-7075
Hammertown.com
The main floor is painted with Farrow & Ball’s “String.” Farrow & Ball is an high-end independent paint maker based in Dorset, England, that blends paints in small batches without fillers, using natural pigments and ingredients such as chalk. The rest of the Daly-Delemeester house is painted with widely available Benjamin Moore paints. The mud room entrance is “Gloucester Sage”; the office is “Dry Sage”; the guest room is “Beacon Hill”; and the kitchen cabinets and guest bathroom are “Iron Mountain.”

5 Tips for Preparing to Renovate your Kitchen Sponsored

An Architect-Designed Studio in Ancram